Who would have thought we would end up in a war zone yesterday ... right on the coast of Oregon no less!!  It was a pleasant enough day ... a beautiful sunny day in fact ... when we hit the first beach in  Fort Stevens State Park near the mouth of the Columbia River.  There were bicycles galore with lots of kids enjoying the sand and water. 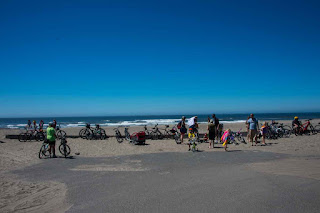 We stayed just long enough to get this picture of all that remains from the wreck Peter Iredale, a four masted ship that ran aground in 1906.  She sailed from Mexico heading to Portand with 1000 tons of ballast, when wind and high seas ran her aground on the Clatsop Spit.  The plan was to tow her back to deep water, but her fate was sealed when she listed to one side and became buried in the sand. 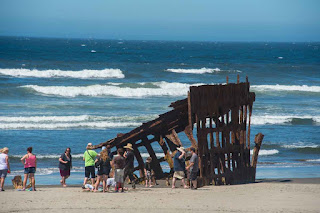 A little further north is the South Jetty at the mouth of the Columbia River.  Known as the Columbia Bar, it is one of the most dangerous waterways, with over 2000 ships having been sunk here.  Known as the Graveyard of the Pacific, the river shoots into the ocean like a fire hose causing conditions to change from calm to life threatening in a matter of minutes.   The tower you see gives you a birds eye view of the coastline and the jetty built to help keep the huge river open to big ship traffic headed to Portland Oregon, one of the major shipping hubs of the U.S. 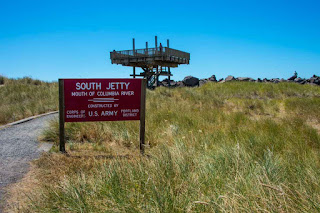 In order to help lessen the forces of nature, this VERY long jetty was built with huge boulders hauled from the mountains by steam trains and dumped beside the tracks as they went.  You can even see pieces of the trestle beneath the rocks as they backfilled their way along the coast. 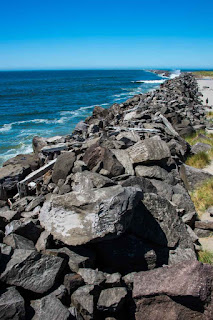 This would have been an amazing feat of engineering.  You can still see part of the trestle that goes inland for miles across waterways and sloughs!! 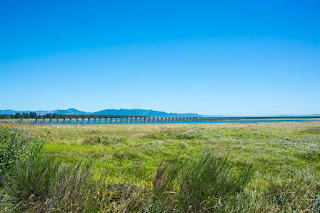 There are a couple of places you can stop along the Columbia River and test the waters.  I have a feeling it was a little too cold for my taste!! 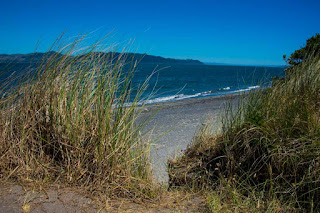 The birds love it however, with a constant breeze to keep them aloft, the pelicans were searching for dinner!! 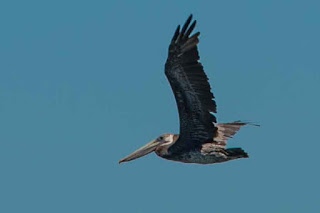 From the jetty we backtracked a little to find Fort Stevens Military Installation, built near the end of the American Civil War.  You might think this wouldn't be a very interesting place to visit unless you were in the military, but I think these sites are fascinating.  Did you know the United States was fired upon by Japanese Emperor Hirohito?? 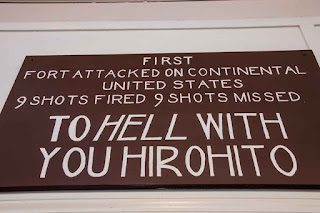 Constructed in 1863, it was part of the Three Harbor Defense System, including Cape Disappointment (later known as Fort Canby) and Fort Columbia to protect the mouth of the Columbia River. 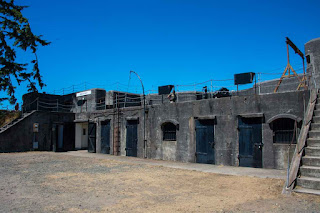 In June 1942, a Japanese submarine surfaced off the coast and fired at the fort.  Thankfully,  they were bad shots and missed everything except the baseball field backstop. 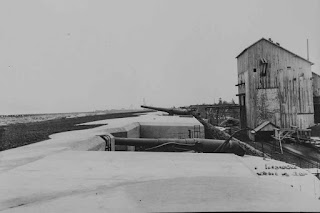 Needless to say, the American soldiers were immediately ready to return fire, but were ordered NOT to.  Talk about some angry men ... they fired on us and we can't fire back??    Although many were never able to understand the reasoning, they did as they were told.  It wasn't known at the time, but they think our smaller guns wouldn't have reached the submarine, but it WOULD have given away their position in the dark of night. 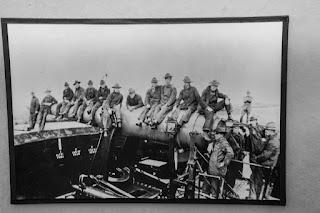 Can you imagine their frustration??  I bet there were some bad words said about that general!!    Thus the Hirohito sign above was painted and placed at the fort by the men.

Here's a replica of the original two ARF (all round fire) battery guns that could be fired in any direction, 360 degrees around.  This Mishler Battery is one-of-a-kind among U.S. Coast Artillery installations and was completed in 1900. 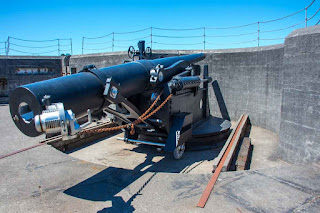 In the rooms below the guns, you can see where powder was stored in silk sacks and tested for moisture before being added to the guns, along with the mortars transported along these rails to a lift system taking them above. 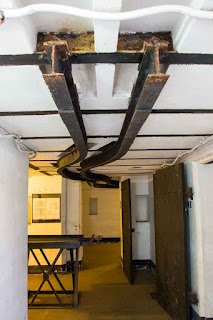 Two more batteries are just a short walk away, all of which you can crawl over, under and through, imaging you were a soldier looking for a Japanese submarine on the horizon!! 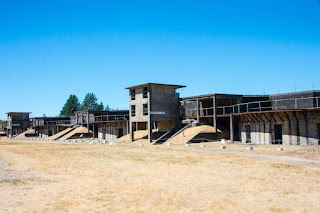 This was the steam plant, built into the mountain and filled with General Electric generators to provide electricity to the installation. 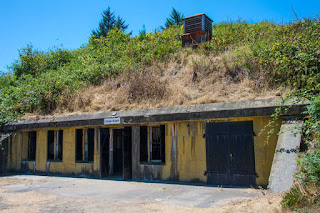 If you want even more information, you can sign up for a tour and take a ride in a troop carrier around the park.  It looked like they were having a great time!! 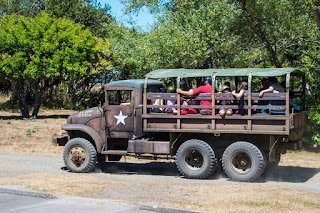 After checking out the museum and small gift shop, we headed back to Seaside for more kite flying.  Trouble was, neither Terry and Nick nor I could get the wind to cooperate.  It just wasn't quite enough to get our kites in the air and keep them there.  No matter, it's always fun to spend time with friends, especially while relaxing at the beach on such a beautiful day!!

The Chance Restaurant produced another great meal of Dan-barbecued pork loin with farmers-market fresh corn and asparagus!!  Maybe the wind at the beach will cooperate today so I can work on my farmers tan a little more!!

Posted by Nancy Kissack at 6:58 AM