There wasn't much on our plate for Sunday except the big Farmers and Craft Market in Lincoln City.  It's nothing like Astoria, but big for a small coastal town.  You can't miss it right on Highway 101, not too far past the array of bright colored flags at Northwestern Kites.  Go early ... parking is a bear!!

I picked up things like ham and cheese scones and soft peanut brittle.  Anyone heard of that before?  Kind of an oxymoron in my book!!  Apparently it was made famous by the Davenport Hotel in Portland.  It's kind of like the inside of a butterfinger bar .... and is it ever delicious!!!  There's lots of other things, like squash, green beans .. you know, things that are good for you!!

With our meager purchases in hand, we split up ... Patty and Dan went to the Outlet Stores and a nice Sunday drive while I hit the kite store and got lost trying to find some more yarn!!  This is Siletz Bay, a huge waterway/wildlife refuge you drive around as you enter Lincoln City.  I stopped for a picture, scrambled down a steep embankment and landed in a pool of water at the bottom, but I got the picture!! 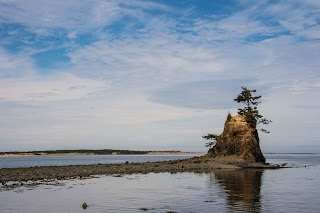 It was then I remembered the Birkenstock store in town.  I have one pair I bought in Hawaii 30 years ago that just finally gave up the ghost.  Although they didn't have the exact style in the color I wanted, I did find a great pair that I hope will last just as long.  Not that I will be wearing Birkenstocks when I'm 95, but you never know!!

Just south of the town of Depoe Bay is Boiler Bay.  It has plenty of parking and lots of picnic tables ... a good place to stop and enjoy the ocean.  There's no access to the beach here ... you are perched on top of the cliffs. 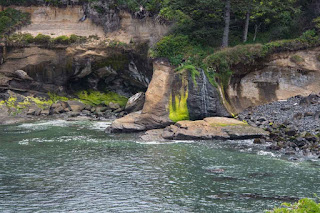 That's a good thing in this case, because you have a great view of the whales swimming right off shore!!  This was a sight I never expected to see.  As far as I could tell, there were only two swimming around in circles spouting off right and left.   Of course I didn't have my long lens with me, so these are cropped quite a bit.  They weren't the biggest whales I've seen ... maybe these were teenagers! 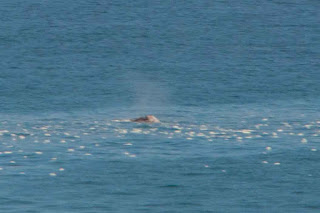 They were just lounging around ... no big leaps or splashy displays ... but we did see lots of spouting off and whale tails!! 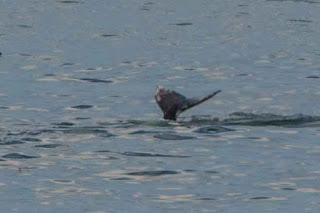 Once they took a few breaths, they slowly dove under water again. 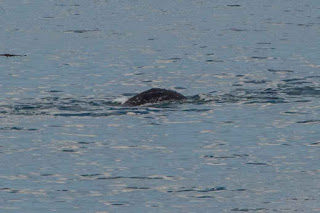 I watched for about an hour!! 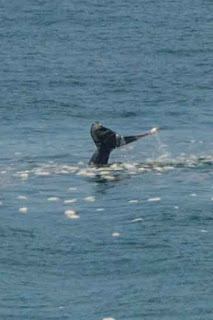 A little further South I stopped at the Devils Punchbowl.  There's a Mo's restaurant (actually a small shack) here if you want a snack, along with several picnic tables. 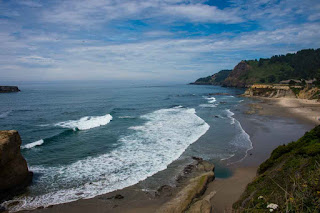 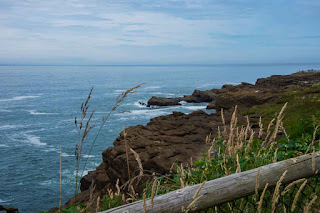 where you will find the bowl, carved out of sandstone by the wave action.  There is a trail to the beach off to the right, but I never did find it.  Once down on the beach, you can walk into the punch bowl through an arch several stories high, hidden on the right hand side.  Don't go at high tide however, as this baby fills up with water pretty quickly through the hole you see here!! 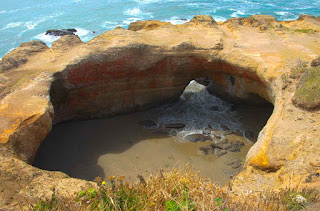 As you walk around the edge of the cliff to the left, there is this neat dead tree ... maybe only a photographer would think it's neat ... and the crows of course, which perch on top!! 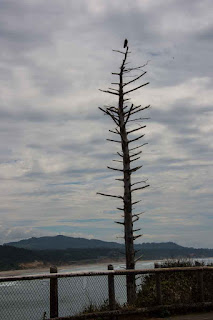 At the end of the walkway is a second beach, perfect for surfing.  Personally, I don't know anyone that surfs, but it's fun to photograph wipe-outs!!  There are at least two trails down to this beach ...  just look for the pickups with surfboard racks and you'll find them. 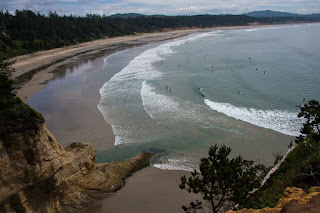 The waves were pretty small and the surfers probably new at this, but it looked like fun ... except I imagine the water was pretty chilly!! 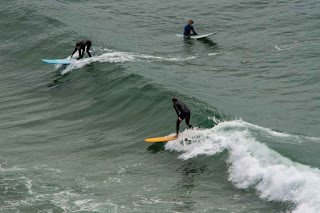 The end of a great day was only made better by the dinner Miss Patty cooked.  How come my "simple" recipes don't come out this good??  She made some amazing squash and we polished off the casserole from the day before.

Posted by Nancy Kissack at 7:11 AM