It was a pretty busy day in Newport, starting with greeting Nick and Terry Russell to the park.  Nick's luck is holding, both good and bad.  Good that the gentleman who said he was leaving at 11:00, left early, leaving the best site in the park wide open, which thankfully Nick pulled in to just in the nick of time.  The bad ..... they don't have good internet or phone service here and my phone says it's supposed to rain tomorrow!!  He's a magnet I tell you!!

I visited with the new Miss Chance in the morning ... meet Missy.  She's definitely made herself at home and will roll over for anyone willing to rub her tummy!!  Snoopy even made an appearance, glared at Missy, flicked her tail and went back to the bedroom!! 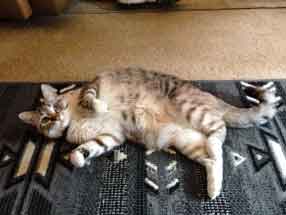 In the meantime, Betty and Joe Graffis came by for a visit.  We have been playing leapfrog from town to town along the coast until we caught up here.  I know I've said this before, but you meet the NICEST people along the RV trail!!  We chatted for some time before they left to do more visiting around the park.

Then Dan showed me how to hook an air line up to the air system on my rig so I can inflate tires.  There's another trip to the hardware store in my future because I need more fittings to make it work.  While on my way here, I stocked up on Dan's favorite drink to pay for all the Dan, how-do-you-do-this favors I need from him!!

Before I could put my yarn on the loom, I needed to make this raddle to keep the yarn from tangling, not that it helped me much.  There's definitely a learning curve to weaving!!  We went to three different lumber yards looking for a piece of wood, some nails and some parts for his burnt end repairs ... not the pork kind, but the electrical cord type.  Where's a Home Depot when you need one???  Although my nails are a little on the short side, it worked just fine ... that is until I made a booboo and dropped the piece keeping it all together.  RATS!!! 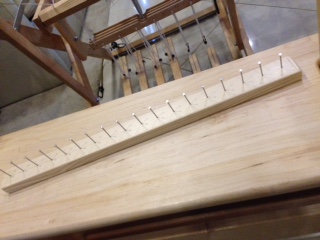 The more I tried, the bigger mess I made ... sort of like my cooking!!  After a couple of hours, I finally got it straightened out enough to try threading it through these wire thingamajigs!!  It's definitely a good thing I'm not in a hurry, because I doubt this will be done before Christmas!! 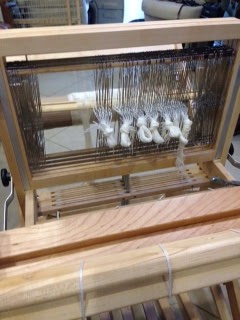 I finally got a break when Patty cooked another great dinner ... taco salad!!  It's nice to have your own personal chef!!!  Her burial ground is MUCH smaller than mine!!

After dinner, she and I took a walk on the local beach looking for treasures.  It appears the tide has been lower than usual and most of the good pieces were gone.  The beach was better for playing in the sand and water!! 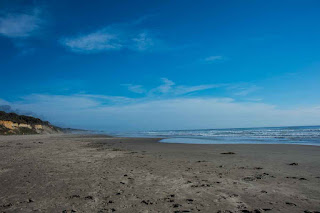 And photographing weird things like seagull tracks in the sand .... 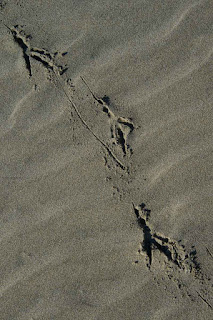 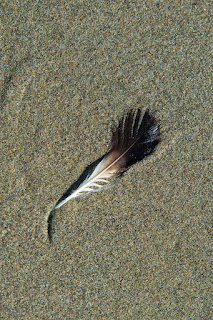 And one of thousands of jellyfish on the beach ...... watch your step! 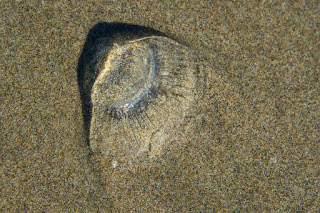 Back at the rig I had a hankering for ice cream.   My new freezer did it's job, just like the one I have at home ... except I put too much peanut butter in the mix.  It came out a little on the sweet side.  Unfortunately it now has half a dish towel stuck to the rim.  I rinsed it out, but that gel stuff inside stays frozen for a long time, sticking nicely to the towel where I set it to drain.  You might want to pass on the next batch I make!! 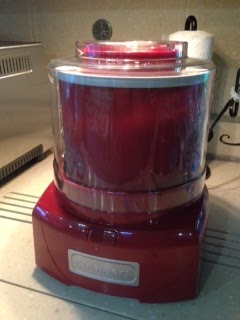 There's lot to see and do here, Nye Beach being among them, followed by quilt stores, the aquarium, new restaurants to try and Jurassic World is playing!!!!!  It's going to be a busy week!!