I'm rethinking my strategy regarding my Thousand Trails membership after this week.  I've picked up lots of tips from watching other campers.  Obviously they know MUCH more about this outdoor thing than I do.  I'm sure you will agree once I share these tidbits with you, that we should all jump on the bandwagon and take advantage!!  That's what life's about, right?  Taking advantage????

More and more sites are paid for yearly by people who find it a cheaper alternative for storing their fifth wheel trailer and boat.  At approximately $300 a month, it's a deal for them.  Who cares if there aren't any spaces left for people that actually USE their coaches to travel and see the world.  They don't really need to see this area anyway.  What a novel idea ... rent a storage space in a campground!!

You can pay dues of $400 for a single area membership, then around $280 a month for a permanent site to park your new (or really old) house, including an 18' wide deck and a 30 x 30 square foot yard.  That's certainly the cheapest mobile home park rent I've ever seen.   More of us should take advantage!!  Maybe instead of moving to Arizona, I should sell my house and move into a Thousand Trails Park.  It doesn't get much cheaper than that!!  Oh I may have to pay a little electricity, but everything else is free ... sewer, garbage, water!!  What a deal!!!!!

Here's another tip ... wash all your laundry in "their" machines (no maintenance or high cost of a washer) and hang your underwear outside for all the world to see, instead of paying a few quarters for the dryer.  I bet you thought there was a rule against laundry lines!!  There is, that's a fact .. but it just says you can't string lines up to trees.  No matter that it's 68 degrees out and foggy every morning ... in about four days maybe they will be dry.

And don't worry about taking up someone's tent camping spot ... those tent campers can just go somewhere else.  They put those blue Tent Camping Only signs up for fun!! 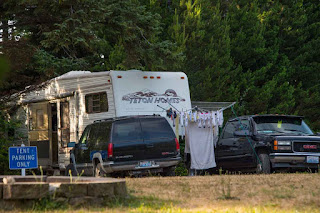 If you DO get a permanent site, feel free to decorate it any way you want.  The more oyster shells you can pack around the edges the better.  Throw in some strings of green Christmas lights, some yard art and a few buckets of driftwood to make it look homey.  To make it even better, set up a television in a big plastic storage unit so you can sit and watch TV all day under your umbrella.  Who cares if it's too loud ... this is YOUR space and you can do what you want!!!  THEY may have rules to follow, but they don't apply to you if you have a year-round site!! 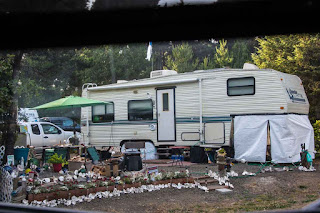 Here's another tip.  Don't worry about being careful of that sewer hose.  If it breaks or the fittings come apart, just let it run all over the ground.  It won't bother anyone.  If someone does notify the Ranger, all they will do is spread this white stuff ... caustic lime I think ... all over the ground for the next guy to deal with. 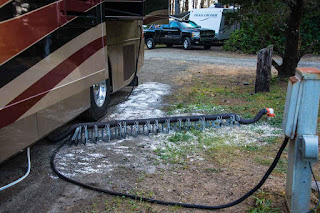 Here's another fun tip.  If you bring your dog with you and would rather not have it in the house, just tie it outside.  It will be fine, trust me, even if it tips over the water, you'll be home eventually.  If it barks all day long, making all the other dogs in the park bark, that's okay too.  No one comes here for peace and quiet anyway, so let it howl!!!

While you're at it, bring everything including the kitchen sink.  You can fill your site up with enough stuff to sink a battleship .. tables, barbecues, bicycles, toys, surf boards, strings of water hoses, chairs and even your own huge fire pit.  Who cares if there's not enough room to park your vehicle once everything is unloaded.  It's even more fun if you disconnect the muffler so it's really LOUD!!  It sounds so cool when it reverberates through the trees!!

You can also ignore all the signs around the park ... not just the tent camping ones.  That dumb sign about scooping up your dogs land mines??  Ignore it completely!!  So what if it's right next to YOUR trailer ... just walk past it, take your dog up to the tent camping area and let it do it's business.  No one goes up there anyway, right??  Besides, it's funny when someone steps in it!!  Worst case, the neighbors will call a Ranger, who will drive all the way up there with a shovel and remove it for you, so why bother??? 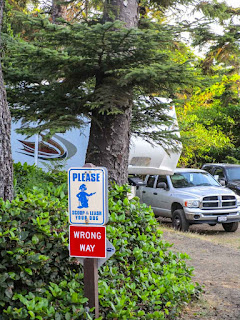 Another thing about these parks ... you can bring your kids and let them scream, yell, and talk back with no repercussions whatsoever.  Got five grandkids??  Bring them along.  The roads are more than wide enough to play ball.  Even if the ball hits someone else's house, who cares?  If they own a motorhome that big, they surely have enough money pay for that dent repair!!

The thing is, you and your family can be just as inconsiderate and rude as you want and no one will care.  Maybe the other campers won't like it, but that's just too bad for them.  Sound like a good strategy??  I see it more and more every day and think I must be missing out on something!!  Surely there's a school on how to be a BAD CAMPER and OBNOXIOUS NEIGHBOR.  Where do I sign up!!!