Life's an adventure, especially in a rolling house and you never know what's going to happen!!  We packed up early leaving Whalers Rest Thousand Trails Park outside of Newport Oregon, not getting far at all when Dan called me on the radio.  "I've got an air pressure alarm!!!"  To stop or not to stop ... that is the question ... when sometimes it's not real, just a change in pressure.

Good thing Dan stopped THIS time, because one tire was down to 60 pounds.  I would usually wait for them while they get it fixed, but with the popular Seaside park, early arrival is necessary to get an RV site, where we plan to stay for two weeks.  I went left, they went right!!  Turns out it was a loose valve they forgot to tighten when he got new tires a few weeks ago. 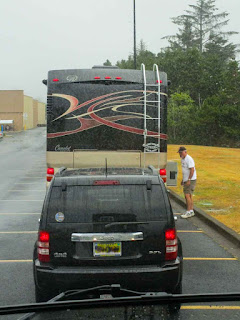 Heavy fog dogged me the entire trip, requiring windshield wipers most of the way.  I had a couple of great pictures ..... of water on the window. 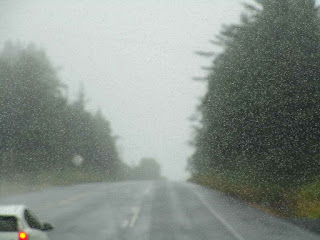 The higher up the more fog I encountered.  It was no problem driving however, since I got in behind two guys who thought the speed limit was 40 instead of 55.  Try as I might, I couldn't get around them!! 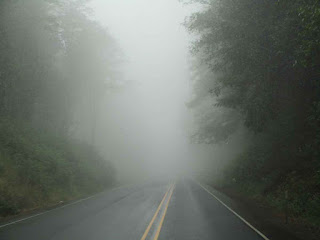 Right on the ocean here and the only view is of more fog!! 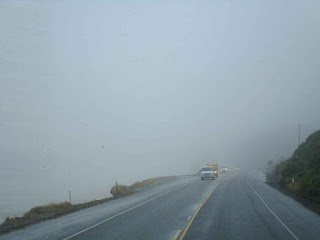 Finally, coming into Garibaldi, I could see a little blue sky in the distance.  It's still a beautiful drive, even if you are going REALLY slow (still behind the slow drivers)!! 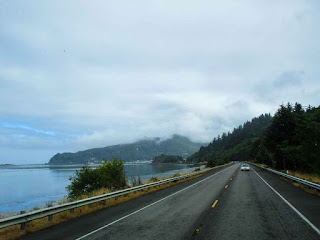 This is going to be me when they take my drivers license away!!  She was speeding right along beside the highway, definitely on a mission!!!  Don't honk when you see me, I'm liable to run off the sidewalk!! 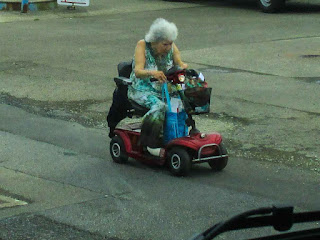 When I got to Seaside Thousand Trails, there were only three spots available on the North side.  I parked in one, then stood in the middle of the other close one, putting on an Oscar performance.  Phone to my ear, arms waiving in the sky, I fended off a fifth wheel trailer that was looking for a site.  He parked in the row behind us in the third spot.  Patty and Dan were only about 20 minutes behind me and are now parked two doors down. 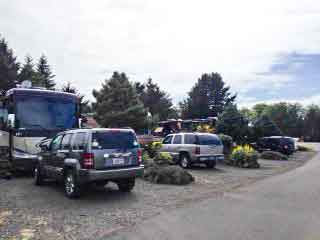 Of course the first order of business was a trip to the beach ... not to play in the sand, but to have a Tsunami Pastrami at the Tsunami Sandwich Company, half a block from the beach.  BEST sandwich ever and so big that Patty and I shared one and it was STILL too much!!! 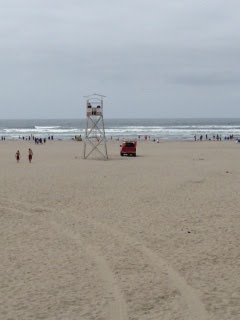 With food under our belts, we watched the crowd for a few minutes before returning to the rigs.  Kite flying and window shopping will happen another day. 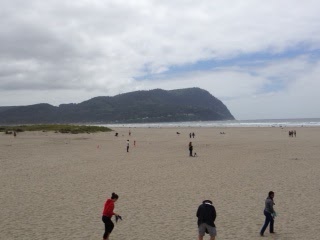 Back at the Chance coach, we were greeted by Miss Snoopy keeping an eye out for strangers.  Missy usually sits here, so we were surprised to see THIS baby.  Patty says they have boxing matches occasionally, but for the most part, get along just fine. 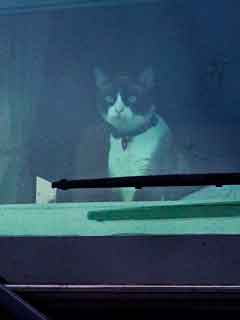 What about the exploding pepsi you ask???  You can imagine the mess, right???  When I got home, after weaving a little, I thought a nice icy cold pepsi would be yummy.  I opened the fridge, then opened the bottom drawer (four inches deep, across the entire width of the fridge) to behold a can that had exploded, spraying pepsi all over everything.  Yup it was a BIG mess.  An hour later I finally got it all cleaned up, as well as all the stuff that was in the drawer.  I'm just glad it wasn't in the TOP part of the fridge!! It's nice to be settled in for this next stage of the summer.  It's somewhere in the 70's, warmer than Newport with no breeze here at all.  I sure hope it kicks up on the beach a little so I can get to flying.  That new kite is burning a hole in my pocket!!!