No ... not tweeting on the internet ... tweeting from the trees!!  I'm not sure what's wrong with the birds here in Ocean Beach, Oregon at the Thousand Trails Park ... maybe they're eating something they shouldn't be ... but at 4 am this morning, they were singing loudly outside my window!!  That and the jet engine my neighbor has for a heater, was the end of my night and the start of the day!!

The good part about getting up this early is that there is no one else in the world on the internet, and my little one bar Sprint is working like a charm!!

I left Florence yesterday around 8:30 am, driving probably the worst section of the coastline for an RV.  The roads are narrow with lots of turns, not allowing much over 30 mph. 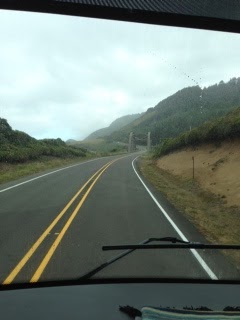 Since I forgot to charge the battery in my little camera, I only got a couple of pics with my phone.  I'm too careful a driver to try and get more!!  No one wants to pay for damage to one of these beasts! 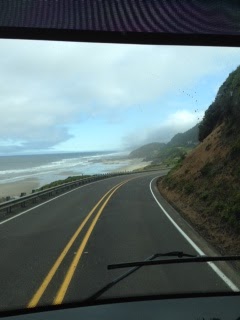 Patty and Dan Chance were already at the park, staying in the dry camp area so they would have first chance at any sites that became available.  That worked out perfectly!!  They got a great site up the hill just as I pulled in, so Dan came to the gate and directed me into the only other empty spot.  This North side of the park is popular due to fewer trees and better phone reception. 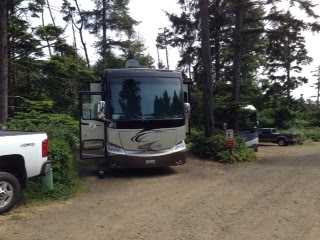 The lack of parking on this side is not good for Nick and Terry who are headed this way today!!  So last night, Patty and I walked the park and discovered a rig leaving before noon, which is when we met another author full-timing on the road.  Ken Cole was his name and his wife grows the most beautiful flowers!!  I'm pretty sure by the time he leaves, Nick and Terry will be standing by to snag the space ... this time with satellite since there are no trees in their line of sight!  That's pretty important when you're camping, you know!!

Dinner with the Chances was wonderful ... home cooked and delicious!!  I also got to meet the latest Miss Chance named Missy, which they adopted from a shelter on their way here.  Pictures to come ... she's a beauty and so very friendly!  Miss Snoopy didn't like the intrusion at all, but is adapting .... sort of anyway!!

New adventures in Ocean Beach and Newport ... yarn shops, quilt shops, farmers market ... lets get this show on the road!!!
Posted by Nancy Kissack at 5:42 AM