What A GREAT Farmers Market!!!

First off, thank you for all the comments about yesterday's blog.  I originally wrote it as a frustrated person who follows the rules ... than changed it up to be more tongue in cheek, which doesn't exactly translate over the internet so well.  Being a rule follower, it's difficult to watch everyone around you BREAK all the rules with no consequences ... but that's just how I was raised.  By the end of the piece, I was laughing at all the crazy weekend campers.  I have realized there definitely is a difference between RV'ers and "Campers" ... but as Dan Chance said ... live and let live ... they'll be gone Sunday morning!!

While Dan headed North to Garibaldi/Wheeler area to ride a train into the forest (something they only do four times a year), Patty and I hustled off to the Farmers Market in Newport ... and a GREAT one it was.  There were lots of fruit stands, bakery items, flowers and crafty things. 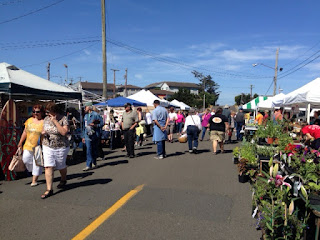 I think it took us over two hours to check out every table.  There were lots of big sweet juicy blueberries but the marionberries and blackberries were sold out in the first ten minutes. 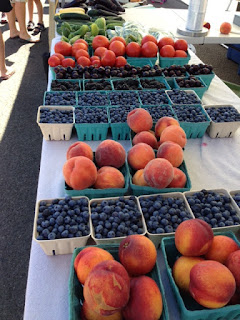 I actually saw a couple of chefs buying up huge baskets of fresh vegetables for their restaurants.  This was the biggest seller, having a VERY long line and THREE cash registers trying to keep up with the sales.  Heirloom tomatoes went faster than they could keep the table stocked, followed closely by bunches of baby carrots and green beans. 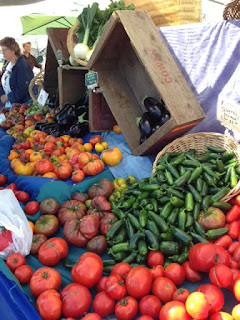 Only one stand actually had bouquets of flowers for sale ... the other tables had the entire PLANT for sale!!  There were food items also ... grilled cheese on homemade sourdough and crepes filled with strawberries and cream cheese whipped cream!!  Life is good in Oregon!! 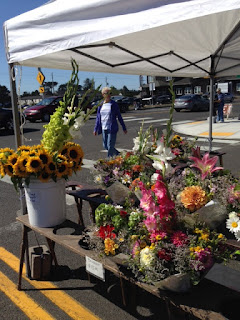 Once stocked up on heirloom and beefsteak tomatoes, baby squash, basil and purple potatoes, we headed back home, with a short stop at the beach.  I had seen several cars parked on the side of the road and wondered what they knew that we didn't.  Time to stop and check it out.  A very short easy walk brought us to this magnificent, quiet beach without a single person in sight. 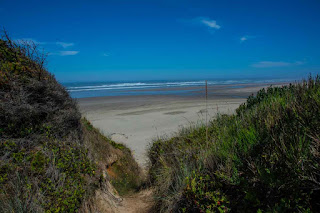 THIS is my kind of beach!!  Perfect for kite flying ... but on this day, Patty and I scrounged around looking for driftwood treasures, which had been few and far between up to this point. 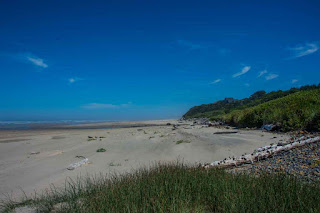 WOW!!! An entire treasure pile just waiting for us to attack!!  With several not-so-perfect pieces in hand, we took our vegetables and treasures back to the rigs. 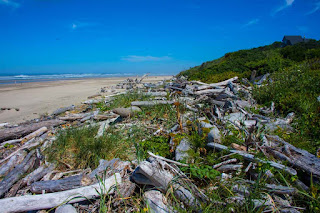 When Dan returned (after a two hour drive to get there the train ride was cancelled due to fires) we met friends Barbara and Tom Westerfield and Terry and Nick Russell at Kam Meng for the last supper as the Westerfields will continue further south today.  It seems Terry and Nick had a great kite flying day with a gentlemen who not only can fly Revolutions, but is a great teacher.  I'm hoping some of that will rub off on me!!!

Back at home, I played with the puppies for a bit.  This picture totally depicts what Cooper is all about ...  THE BALL GAME!!!  He's totally fixated and has me trained very well to retrieve it when he can't, by barking loud and long!!   The light bulb finally went on for me (after five years) ... if I put the balls away, there's no ear splitting bark, followed by me saying BE QUIET!!!  I'm going to put my plan into action today and see how it goes!!! 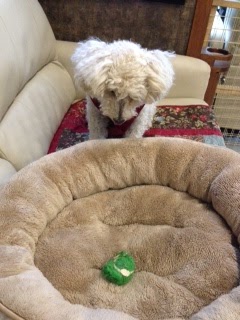 I'm also hoping to get in some kite flying.  I've been watching lots of videos online and have some new things to try!!  It's all in the subtle movement of your hands ... not the wild arm waving I've been doing!!!  It should be a fun, sun filled, gorgeous blue sky day on the Oregon Coast.