It's been a long time since Lewis and Clark set foot here and there are very few remnants left of their presence.  Yesterday, we toured downtown Seaside looking for presents of the gifty kind for the Chance granddaughter, then continued a short distance North to check out where Sacagawea slept. 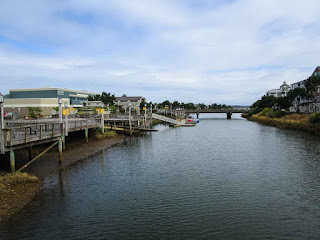 We parked at one end of Broadway Street, walking across the finger of saltwater that recedes to mud when the tide goes out, and admired the beautiful flower baskets hanging around town.  It's rather early and many businesses are closed.  One sign said they opened at 11ish!!! 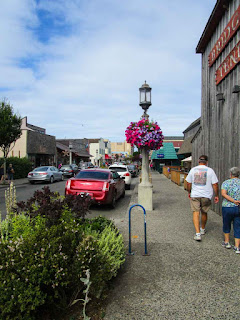 The carousel is still here, inside a huge building surrounded by small shops with mostly trinkets and T-shirt gifts.  Be sure to check out the Man Cave store, the 50's Diner and the Candy Store with all kinds of sweets you can't find anywhere else. 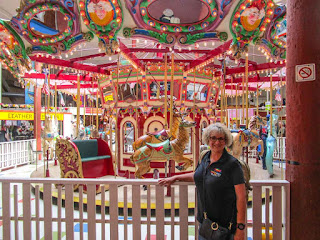 These hydrangeas caught my eye immediately.  They are called City Line, the Mars variety.  I call them GORGEOUS!! 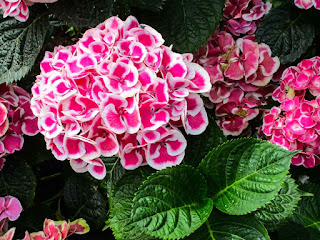 At the end of Broadway is the turnaround at the beach where the kite festival is held every year. 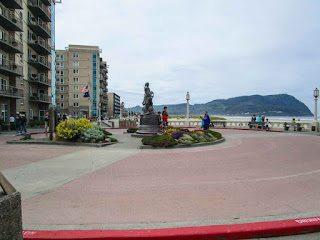 This is what it looked like in the 30's and 40's.  Not much difference except the Aquarium has moved down the street to the left and hotels have taken it's place. 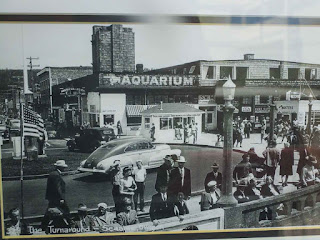 This statue of Lewis and Clark has been added to the center ...... 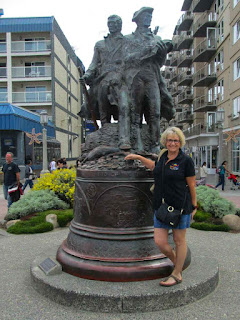 along with loads of beautiful landscaping!! 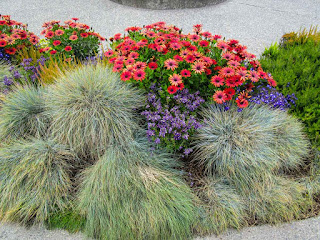 As we turned the corner and headed back East toward the car, our favorite restaurant is just a few steps from the turnaround.  Tsunami Sandwich Company has GREAT sandwiches!!! 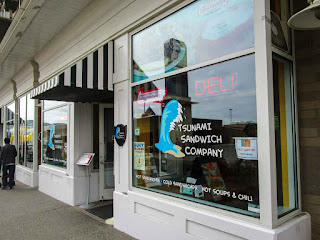 After putting away the gifties and making a quick puppy-check, we headed north to the site of Fort Clatsop.  This is where Lewis and Clark spent the winter on the coast after arriving at the mouth of the Columbia River and being stuck at Dismal Nitch in a bad storm.  The original fort was built on the ground, and between the rain and fog, began to rot almost as fast as it was built.  Within a couple years after they left, minus some of the materials the Indians borrowed, the land was homesteaded, the fort burned and the entire forest chopped down to make way for fields. 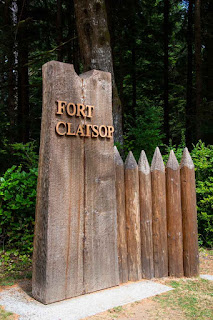 The Historical Society finally took control and talked the National Park Service into rescuing the site, whereupon they built a replica of the fort from drawings Clark had made on the cover of one of his journals. 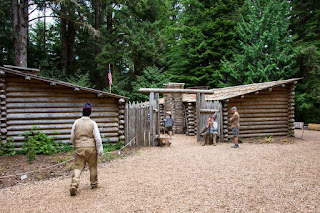 There are several gentlemen here, dressed in the digs of the day who can answer any questions you might have, as well as tell stories about the Corps of Discovery. 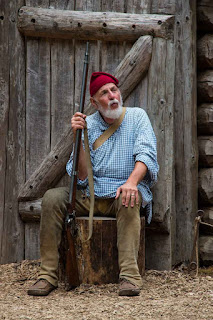 In 2005, a small ember from one of the fireplaces made it's way into the floor and overnight, the entire fort burned to the ground.  The Historical Society, along with many volunteers, completely rebuilt the fort you see today.  It's a GREAT site with history oozing out of every corner and is definitely a must-see!!! 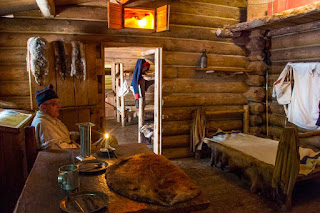 Sacagawea slept here ... well actually in the room next door ... with her translator husband and her baby boy.  You can walk in her steps down to the ocean where they first landed their canoes.  At almost the exact place we were flying kites in Seaside, they set up a salt station, boiling saltwater until they collected enough to make the return trip home. 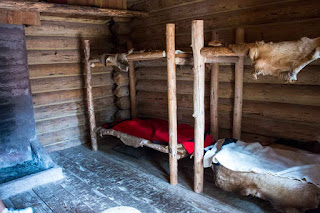 You can even take your picture with Sacagawea standing right beside you.  Remember I said this area was deforested by the original homesteader??  All the trees you see here were replanted by the Forest Service, returning the area back to its original state. 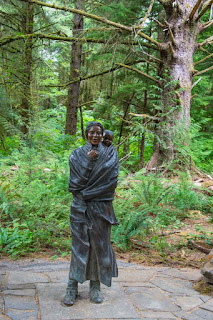 There's a nice visitor's center with a large map showing the entire trip of the Corps of discovery, along with small replicas of the three forts they built along the way.  Your National Park Pass will get you in free.

It's raining hard this morning as I write this blog, but there are two Farmers/Craft Markets this weekend we want to see.   First will be Ilwaco Washington, and on Sunday, the HUGE one in Astoria, just a few short miles North of us, so NO kite flying for a few days.   You are probably tired of hearing about kites anyway!!!  Now if I can just find an umbrella so I can stay dry!!