And The Crazy Begins!!!

I can tell it's July 3rd because RV's and campers are driving around looking for their spots here at the Eks RV Park.  There's people up until midnight laughing too loudly, other people coming in at 1:00 am slamming their car doors and dogs barking constantly.  I'm feeling pretty good about MY puppies at this point!!

With basically no sleep for three days from my beloved trains, I stayed close to the couch yesterday.  I set up my new loom and went to town weaving, not realizing that the clacking noise was scaring the puppies into a corner in the bedroom!!  Once I slowed down and tried to be quieter, they stuck their heads around the corner to see what the new contraption was.  When opened up, it fits quite nicely with lots of room to move around. 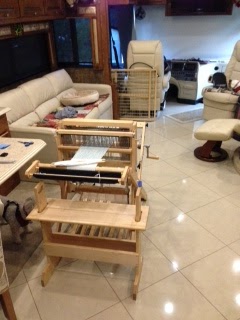 More repairs ... I opened a cupboard door and it basically came off in my hands.  Seems the screws that hold it tight had stripped the wood.  Much as I hate to brave the crowds in town today, I need a couple screws just a little bigger around to get the door back in place. 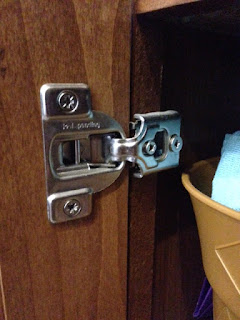 In the afternoon, Nick and Terry Russell stopped by to check out the loom and their site for two days here at the Elks Park.  I asked the girls if they had a cancellation to let me know, and they did so yesterday.  I hear Nick needs a place to heal up from his kite flying expedition to the beach!!  He flew his new Prism Quantum stunt kite and apparently had a blast.  I brought one of mine ... the other is sitting by the kitchen door at home ... DRAT!!  What was that about having two of everything??  When I look hard into the fog, I'm pretty sure I see myself flying a new Prism Quantum!!

By dinnertime I was feeling much better, so I threw together some cowboy sloppy Joes and Mexican cornbread ... yum yum!!  Cooked in the Breville oven, it came out perfectly!!  Maybe there won't be as many burials along the Oregon coast!! 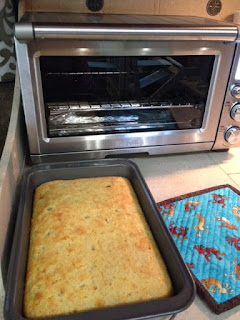 As the morning goes on, my to-do list is getting longer.  I better get cracking!!!

Posted by Nancy Kissack at 6:32 AM