Tallest One On The Oregon Coast!!

There are many lighthouses along the Oregon coast, like Yaquina Bay lighthouse ... small, unassuming and haunted.  The Yaquina HEAD Lighthouse however, is the tallest in Oregon at 93 feet and one of the few that hasn't officially been the home of something you can see through.  Nick Russell loaned me his book ... Haunted Lighthouses ... so I can keep you up to date on midnight wanderings along the coast.  I just love ghosty stuff!!!

Yaquina Bay was the site where a 16 year old girl disappeared after she entered the building, long after the lighthouse was closed (replaced, since it couldn't be seen much from the sea).  The case was never solved and they say she roams the restored building at night.  It's replacement, Yaquina Head supposedly has a construction worker buried inside the double walls (or maybe the old lighthouse keeper) who occasionally talks to people, but no ghosts have been seen wandering around the premises. 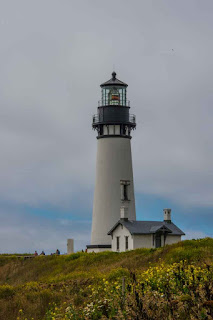 The light was made in Paris in 1868 and first lit here in 1873.  The fixed Fresnel lens can be seen from 19 miles out in the ocean.  There is a $7.00 per car fee if you do not have a Federal Park Pass.  The entrance road takes you directly to the parking lot at the Interpretive Center.  If you aren't interested in that and don't want to purchase a ticket to tour inside the lighthouse, just make a turn around the lot and head for the exit, turning right, which will take you to the lighthouse parking lot.  Otherwise you have a long walk ahead of you. 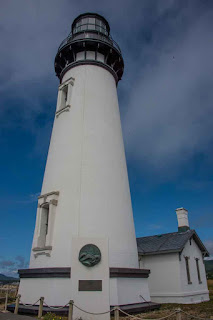 Behind the lighthouse on the ocean side is a rookery for many types of birds.  You can't miss it because you will smell it LONG before you see it!!  There are cormorants, murres, puffins and seagulls, many sitting on nests filled with babies.  All this dark brown stuff??  It's birds! 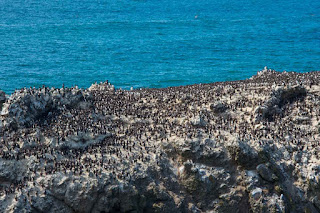 Everywhere you turn there are beautiful vistas here ... well worth the entry fee!!  There are also a couple of trails you can hike to higher ground. 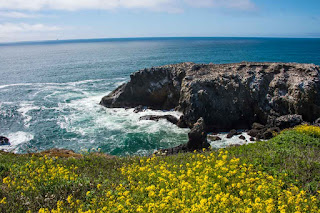 Flowers are blooming like only Oregon can grow!  If you look close at the outcroppings to the south, you will see lots of seals sunning themselves on the rocks. 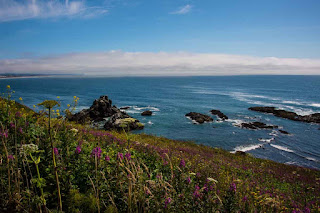 Most of these rocks are also covered with rookeries full of squawking babies and moms fighting to keep their square foot of space.  Below these guys are tide pools you can drive to, well worth the trip down to the lower parking lot that you passed on the way to the Interpretive Center. 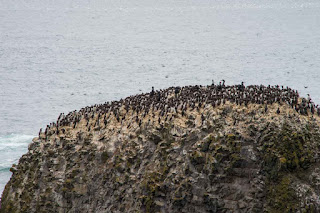 One last look at this beautiful sight.  I have to say the Oregon Coast has some of the most magnificent scenery I've ever seen.  I think I could live here!!! 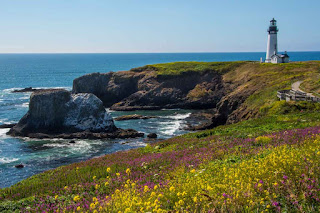 Earlier in the day Patty and I hit the Fred Meyer store for some essentials like shirts and capris.  We made a quick stop at Quilters Cove where I picked up this book of quilts that look like they came from the seaside.  This shop is geared toward wall hanging scenes more than quilts in the normal sense, meaning they don't have much fabric, but tons of patterns for small "picture" quilts. 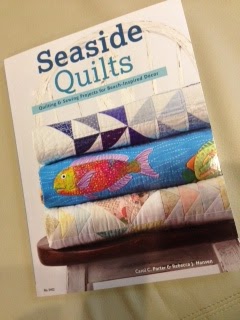 I've been working on my second weaving project in between trips to town ... this will be several washcloths so I can practice different patterns on each one, as well as hems.  Lucky for me, Miss Terry had some extra shuttles and offered to wind some of my yarn on bobbins.  I'm set to weave like crazy now!!! 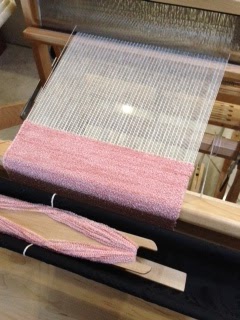 If everyone's schedule jives today, we'll meet up with the Westerfields, coming south from Tillamook.    By the way, if you are having trouble getting online at some RV parks due to poor reception, check out Nick's Blog ... We're Connected.  He's found a GREAT solution and is sharing it with everyone.  If you want to purchase it from Amazon, be sure and use the link on his page to get to their site, as a "thank you" for the information!!

Posted by Nancy Kissack at 6:37 AM