Hanging In Newport With Friends!!

There were a couple of destinations on my plate yesterday, but I never made it to either.  Instead, I took a drive out the South Jetty to visit with THESE friends ... the locals of Newport. 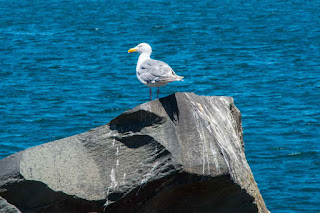 There's a big parking lot at the end and walking trails over the sand dunes to the beach beyond.  Apparently the sign doesn't lie, because all of the fisherman on the jetty were on THIS side of the danger zone, a good sign that I should stay there also!! 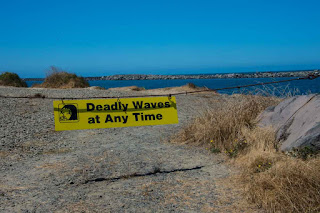 Even on this beautiful sunny day, the waves were hitting the end of the jetty pretty hard. 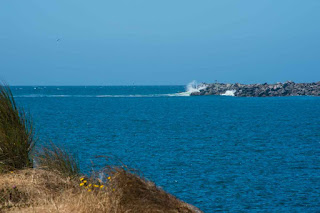 Here you can view the bridge from another angle, play in a small tide pool, catch dinner or just watch the world go by. 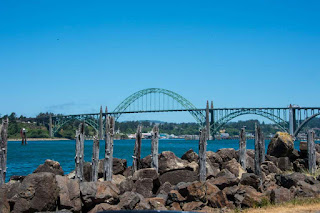 Dan discovered a gold mine the day before, so I went to Old Town next to take advantage and bring home some liquid gold ... chowder that is, thick, rich and delicious clam chowder.  Along the way there are some really great murals to check out. You might go early ... parking is at a premium in this area. 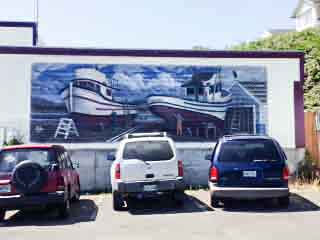 Bad pictures, but this is Pacific Seafood Company.  The same Pacific Seafood that resides in Bay City which we discovered while attending a rally at Garibaldi.  In our opinion, these guys have the best clam chowder on the coast.  We went back again and again to partake of their awesome food!!  It's really a cannery ... processing shrimp on this day ... but there is a fresh seafood market inside, along with a tiny restaurant. 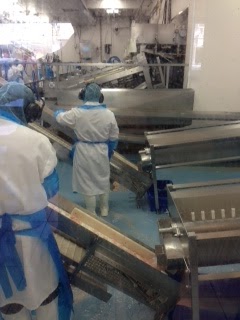 There were probably 30 people processing and kicking out Oregon baby shrimp by the pound!!  By noon, processing will be complete and you can watch the second crew come in to sterilize everything from floor to ceiling.

They also have canned albacore ... some of the best I've ever eaten, rivaling what I used to can myself.  I'll be taking home a case or two!! 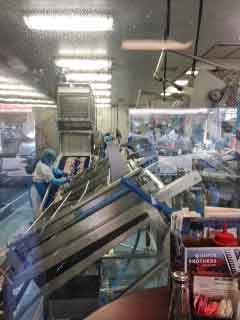 From there I made a stop at Pirate Alley for some yarn.  It's like Disneyland in this little section of town ... kind of creepy really, with all the pirate statues around.  You never know whether they are real or concrete.  I'm always looking over my shoulder ... but there are many cutesy shops here, from restaurants to antique stores.  It's good for a pirate picture or two and some beautiful yarn!!

In the afternoon, our friends Barbara and Tom Westerfield pulled in to town, so we set up a dinner date with Nick and Terry Russell, the Chances and myself at Kam Meng Chinese Restaurant, one Nick highly recommended.  The story of this beautiful lady that came to the United States from China is fascinating, to say the least.  Besides that, the food in wonderful ... best hot and sour soup I've ever had. 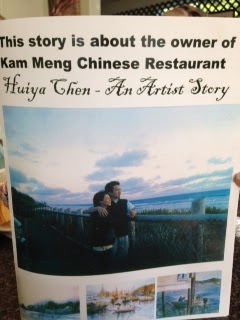 From the time she was little, Huiya Chen was left handed and heard music in her head, which made everyone (including her parents) think there was something wrong with her, destroying her self confidence.  When they moved to Oregon and she heard you could play pianos at the University for free, she rode her bicycle there, just to be able to play.  She has never had a lesson and does not know how to read music ... but that doesn't keep her from playing the tunes she hears in her head, which are amazing.

The walls are covered with her paintings and the music you hear playing in the background is hers.  She's got personality plus ... and offered to play for us ... practicing her new song she said.  What a talent!!!  Although she says some people don't want her to play while they eat, we encouraged her by clapping loudly!!  You definitely should stop in if you can ... the food was outstanding and Huiya Chen's outlook on life is infectious!!  Ask her to play the piano for you!!  You can read more about her story and hear her music at huiyachen.com.  Check it out!! 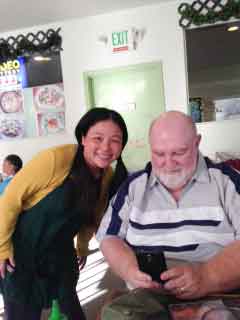 This morning we are going to Depoe Bay so Patty and Dan can take a boat ride out of the smallest harbor in the world.  Although I'd love to go, I get terribly seasick in the open ocean, so I'll hang out in town and do a little shopping.  Later we hope to get in some kite flying.
Posted by Nancy Kissack at 6:43 AM