I've had a nice relaxing time here in Florence, except for that Vet visit.  I didn't really get to see all that I wanted to, but it seems you never do in RV-land.  I guess that's so when you return, there will always be something new.

This will be my last look at this part of the coastline before movin' on up to Newport, where I will catch up with Patty and Dan Chance for a couple weeks ... and I can't wait. 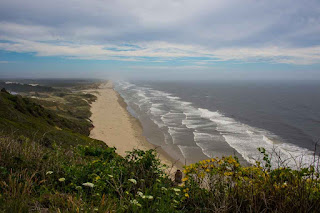 Having finished my very first weaving project, I wavered between washcloths or another scarf.  After two hours of trying to do the math when I'm clueless, I finally got out the second of three dvd's I borrowed from Miss Terry.  After an hour, it made a little more sense ... and just as I began calculations for the tenth time, who should knock at my door but Terry and Nick.

They moved from the Thousand Trails park on the other side of town to the lower 20 acres where phone service is nonexistent and the internet sometimes iffy.  While Nick threw the ball for Cooper, Terry and I talked about all things "thread".  While Nick scratched and played the growl game with Jessie, Terry and I talked all things shrinkage .... cotton yarn that is!!  Both Coop and Jessie were in seventh heaven having someone new to play with!!

After they left, I tested my calculations by warping (measuring out using a warp board) 428 yards.  I couldn't believe my eyes ... it came out perfectly!!  I'm hoping my weaving talent will eventually surpass my cooking skills ... it's too expensive to bury yarn!!  With the loom strapped down for travel, it will have to wait for Newport before the next step takes place.