When you find a good mechanic-repair-restoration place for RV's, you just HAVE to pass the word!  They don't work on engines, but can fix anything else on any year motorhome.

Hwy 126 to Eugene isn't as bad as I remember .. course I only had maybe 10 hours driving under my belt at that time.  Early in the morning, there's no traffic either, so it was a nice drive.  The only thing worth taking pictures of was the doe that ran out in front of me, causing panic mode to set in.  She perched on the edge of the highway ready to leap as I moved into the other lane and slowed as quickly as possible.  At the last second, she did a 180 and ran back into the trees.  WHEW!!!  That was really a close one!!!

Turning North on 569, better known as the Beltway, and then on to Hwy 99 North, I cruised right along and found Elite RV Restoration with no problem.  Mark and Eric met me at the door and we got right to work.  They fixed the flappers on the drain lines so it doesn't smell of sewer in the rig, cleaned my batteries and explained what I was doing wrong, adjusted the material on the door awning, cleaned the jacks and checked for hydraulic leaks, fixed the cords coming loose on the slide covers and reattached the slide cover rail that was coming loose. 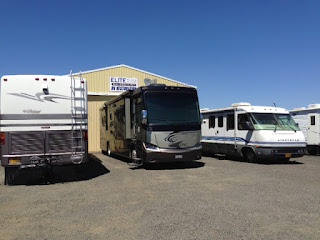 After finding a place to snip a piece of carpet, I ran to town to get a piece to fit the slide addition under my chair, which they re-installed in a much more professional manner.  While there, I checked on the Schacht Wolf Pup loom I had my eye on.  Luckily ... or maybe unluckily for my credit card ... they had the exact one I was looking for ... only this was a used model, at  over 30% off.  The good news is  the lady that bought it originally, never used it at all.  The plastic wrapping is still in place.

Back at the rig, it didn't take long to schedule another trip to town for a bluetooth speaker (the installer of the unit I have didn't know what it was and threw it away), found at Custom Audio for $35.  It's later afternoon now and I'm hot ... which means ICE CREAM!!  It was good, but melted before I could eat most of it. 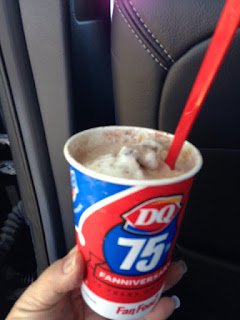 Today they will finish the repairs, including the lower water drain valve, the slide-out seal and replacement of the LP-carbon monoxide monitor I ripped out of the wall because it wouldn't shut up, all to be covered by my warranty.  These guys are just awesome ... taking care of absolutely everything and doing a really good job!!  Besides that, I have a 50 amp hookup while here!

I will stay one more night before returning to Florence and cool weather on Thursday morning with another 48 pounds of weight (the used loom).  So far this has been a GREAT trip, even though I threatened to cancel several times because I was nervous about finding the place.  I don't know what my bill will be at this point, but I definitely recommend these guys for any work you need on your rig.