An Oregon Fourth Of July!!!

What a GREAT celebration of America yesterday in Oregon.  I started the day early down by the wharf in Old Town Florence.  There's always parking between 9 and 10:00 am, but wait much longer and you will have a long walk.  The good news is that parking is free and you can stay for three hours.

Several bi-planes flew up and down the river pretty low, to the shock of people below!!  There was an Airplane and Car Show at the airport, but I ran out of time and they closed before I could get there. 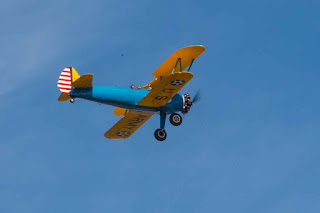 The boardwalk was completely empty as I walked down to the end, checking out all the goodies for sale along the way.  The very first booth always has the best fruits and vegetables EVER!!  I purchased some beautiful tomatoes and corn as sweet as sugar.  There was also a display of the Declaration of Independence and every flag that has flown over these states.  I never knew there were so many!!!  Two hours later, you could barely make your way down the walkway through the crowds of people. 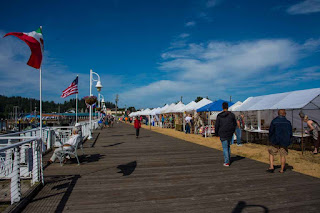 This is Del Huber with Annie.  What a beautiful Kerry Blue Terrier rescue she is, the latest of five Del and his wife have adopted.  In case his name seems familiar, they have a lot in Coarsegold California, as well as spending time in Casa Grande Arizona.  Small world!!  I met Annie at the Vets office where she had a foxtail removed from her foot.  Don also makes the most beautiful wire wrapped jewelry I've ever seen, which they were selling on the wharf. 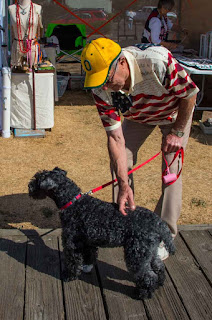 This boat had just come in to the dock, having caught several tuna which they had for sale.  I was tempted, but cooking fish, especially tuna, in my rig with my cooking skills, didn't seem like a good idea. 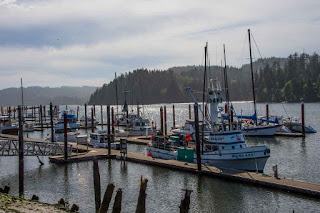 There was lots of jewelry, signs for every occasion, air plants, creams and smelly things ... quilts and food.  It's small but fun since all the local people are so friendly!! 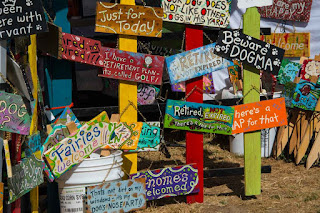 Here's Saskatchewa ... hiding out under the table until a puppy came by, then she would shyly peak out from under ... what a sweetie!!  By the way, Cooper is doing much better ... keeping my fingers crossed!! 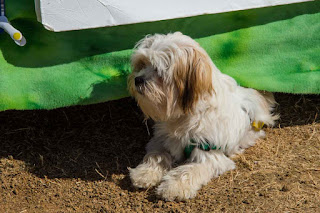 I had lunch at La Boulan something something .... bad Nancy ... she forgot to write down the name.  Right in the middle of Old Town, they have flower boxes on the windows and wine in the cooler, along with freshly made salads and this Big Fat Meatloaf Sandwich with pesto sauce on fresh baked homemade bread that was delicious!! 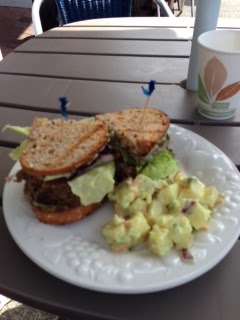 Down by the water is what remains of the ferry dock, which was the only way to cross the river in the old days.  It's made from old growth tree trunks that still survive.  It saw it's last working days in 1936 when the WPA built the Siuslaw River Bridge. 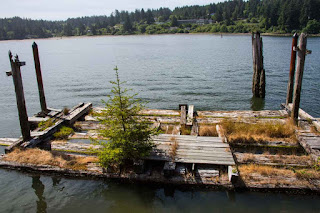 The pilings remaining along the river front in Old Town are from the timber industry buildings which  disappeared long ago.  Logging still survives here, but trucks do all the hauling now. 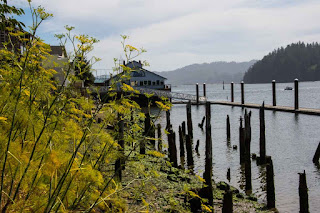 The bridge, built in the Art Deco style, still raises and lowers for tall masted ships, although not many pass by these days. 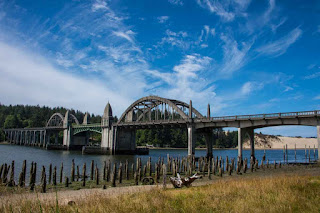 There are several little park areas you can visit close to the water also.  When I heard a lot of screeching in the air, I couldn't figure out why all the racket until I finally saw these guys.  Momma is the black one, feeding her gray baby who was VERY hungry!!!  Before I could set my camera for a faster, non-blurry picture, she flew away to gather more food!! 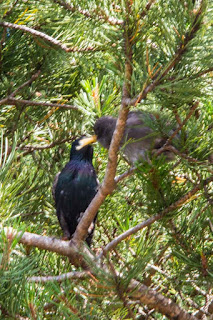 Flowers are in bloom everywhere, including next to a Coffee Shop where you can sit and watch the world go by. 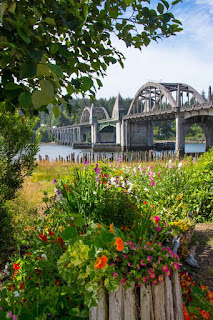 In one of the little garden areas this Bride was getting ready to be married.  I thought maybe that was her husband to be ... but he already had a ring on his finger and was more interested in the food than the Bride!! 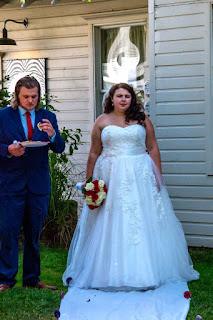 At the West end of Old Town is one of my all time favorite stores ... Kitchen Klutter.  LOVE this store!!  So why did I purchase a Cuisinart ice cream maker you ask??  Because I was supposed to bring mine with me.  I made note after note to remind myself ... and I DID remember to bring the bowl that stays in the freezer.  Unfortunately, I forgot the rest ... I think it's sitting by the back door along side my Rev Kite!!  Two of everything ... that's my motto!!  These little gems make great ice cream!! 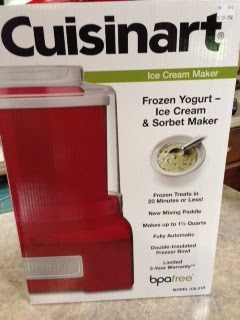 Here's a couple of treasures I found.  The bracelet hooks with a very strong magnet and is made from 1952 sterling silver spoon handles ... with an added starfish.  The barely visible ring above the business card matches.  The card is from Don (with Annie above) who made the pendant from stones out of Burro Creek, an Arizona mine, which has since been closed.  This is some of the best wire wrapping work I've ever seen!  What an artist!! 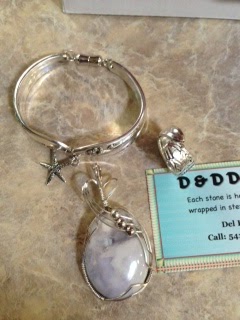 There was a big fireworks party at 10:00 last night on the wharf, but I stayed home with the puppies, who don't like loud bangs!!  It was an awesome day on the Oregon Coast.  Happy Birthday America!!