Shake The Dice And Roll Again!!

Sometimes your plans go awry .... like they did yesterday for us .... and you just have to shake the dice and roll again for a new destination.  Jurassic World has been on my radar since it opened at the movie theaters a couple weeks ago.  Since Oregon feels like a jungle most of the time, what better way to spend an afternoon than in Jurassic Park.

I previously checked the website for times, but I should have checked it again.  When we arrived at the theatre at 11:30 am and I ordered my popcorn, she threw a pair of 3D glasses on the table.  Wait ..... we don't want to see it in 3D!!!  Wouldn't you know, they switched the regular and 3D showings that morning.  Can you put that popcorn back??  Our show won't be on until 3:00 pm.   So what will we do for three hours??

The roll of the dice put Patty, Dan and I North in Depot Bay ... WITHOUT my camera!!  Well for heavens sake!!!  They say the best camera is the one you have with you ... which was my phone ... a poor substitute to say the least!!

This is taken from the bridge overlooking the harbor.  Patty and Dan want to take a boat trip from here out to the ocean to see if any whales are playing along the coast.  I get terribly seasick ... so I'm not sure if I'm up for that adventure!!  At any rate, going from this harbor under the bridge I'm standing on, would be pretty spectacular!! 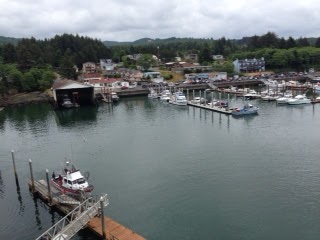 If you look straight down, the guys are always filleting fish at this cleaning station for those that have braved the California waters on fishing boats.  Every once in a while they will drop a scrap or two to the seals waiting below, which the seagulls try to steal.  It's pretty entertaining to watch!! 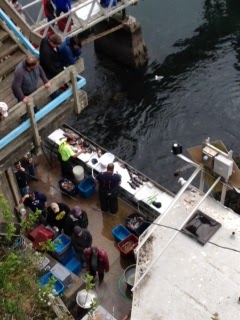 A couple hours later, after lunch at the Chinook Winds Casino buffet, we headed back to Newport to the theatre.  Jurassic World was a GREAT movie ... but then I love shows like this!!  It had a different concept than the previous movies and wasn't quite as exciting as the last three, but man-o-man ... those dinosaurs sure do look real!!  The good guys lived, the bad guys got eaten, the heroine was a little overdone in her white skin-tight suit and spent the entire movie running for her life in high heels ... all totally believable!!!  I can't wait for the DVD to come out!!

Back at the mobile castle, I'm really glad to hear Nick and Terry finally have an internet connection helped along by a booster antenna they were able to set up.  I was feeling bad that I had a signal and they did not!  I also need to contact Terry to find the name of a big yarn store near Lincoln City!!!  I don't know how we came to be so dependent on our phones and the internet, but without them, I feel totally disconnected from the world.

Time to shake the dice and roll again ... there's several picture opportunities along this section of the coast that I don't want to miss!!