Not mine, but my neighbors!!!  Keep your fingers crossed that indeed the 7 people in the 30 foot bumper-pull trailer next to me leave the park.  Last night was the LAST night of their stay, according to the date on their card hangar.  No more loud music, bodily function noises and temper tantrums!!!  YAY!!!

Early yesterday, Patty Chance and I made a screaming fast drive back to Florence, with me playing race car driver.  Poor Patty was hanging on for her life!!  She had not been to the Farmers Market at that location, and wanted to pick up a few things.

It was wet and wild the entire trip, with rain sprinkling on and off as we pulled into Florence.  Because of the weather, there were only about five sellers set up, including the one vegetable vendor. He's got some great stuff if you're going through town on a Saturday!!

On the way home, we stopped at the State Park in Yachats, pronounced Yah-hahts.  In the native Siletz language, it means dark water at the foot of the mountain.  When the government decided to open up Coos Bay to homesteading, the Indians were forceable marched to this location where the hunter-gatherers were not allowed to hunt, but were made to grow their own food.  That idea failed miserably resulting in many deaths from starvation.

When the natives were finally allowed to hunt and began a resurgence, they were again forced to move as THIS area was opened to homesteading.  In the late 1800's, a small town and post office were located here and during both World Wars, this area supplied spruce trees for airplanes. 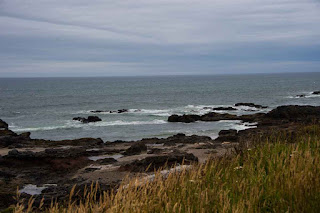 It's a great place to stop, check out the tide pools and have a picnic ... but not yesterday because the wind was blowing like crazy and it was pretty cold. 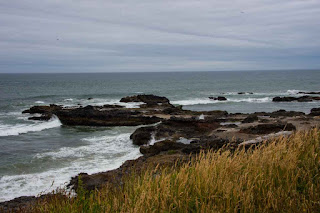 Early in World War II, a shelter built near the top of Cape Perpetua was used as an observation and radar station, looking for enemy submarines.  Foxholes and gun emplacements lined the shoreline and military personnel were housed in the local skating rink.  After the war, the Coast Guard discovered several Japanese mines had floated up on the beach, which they promptly destroyed.  I never thought of the Oregon coast as a war zone!!!

We have driven by the sign that says Log Church Museum several times, but never stopped, so we did a quick drive-by.  In the early 1900's this little church was built from local timbers, but soon the congregation outgrew the cross-shaped building. 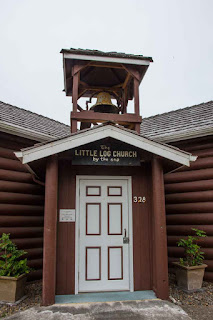 When the new church was finished, this one was purchased by the Historical Society on the condition it remain a museum.  It might be worth a stop since it is filled with local historical items. 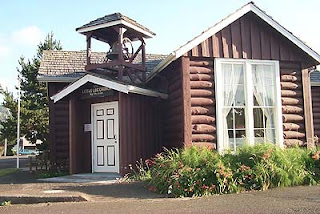 We didn't go inside because it said closed, although the docent came out with the Open sign ... we were on a mission to get back to the rigs before getting any more wet than we already were!! 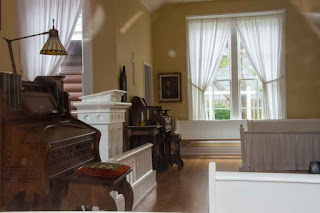 As we left the little church, this beautiful house got our attention because of the gardens.  Everywhere you go up here there are plants growing crazy!!  It sure makes you want to refurbish your yard when you get home!! 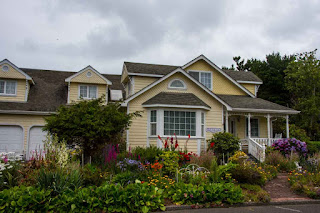 We got back just in time for the rain to stop as we made a reconnaissance trip to Wally World for rations.  I re-warped my loom .... I trashed the previous project once I learned the yarn/thread I was using wasn't going to work .... and should be able to start weaving today on a new project ... in the quiet ... when my neighbors leave!!!

Patty made a great casserole last night ... I'm taking notes and hoping her cooking karma rubs off on me ... and I finally fell asleep to Def Leopard banging away next door.  As long as a troop of boy scouts don't move in, I'll be a happy camper for the rest of the week!!!