When Nick Russell mentioned something called Camp 18 for dinner, I wasn't sure what to expect.  When I looked it up on the internet, it said Camp 18 Restaurant and Logging Museum.  I was definitely up for that ... not only do I love food (maybe too much) but I love poking around old heavy equipment! 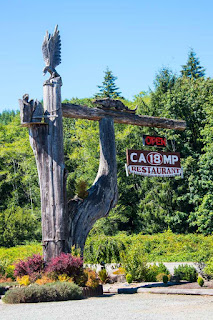 A few miles inland on Highway 26 at Mile Marker 18 (hence the name) this place had something for everyone.  Being kitty lovers, we all noticed the empty cat beds under the benches out front.  It didn't take Patty long to find this beauty snoozing in the cool bushes right behind us. 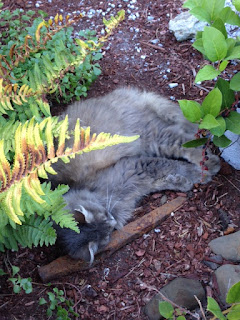 Once reservations were made (just in case) for a nice window table, Patty, Dan and I wandered around the premises checking out some really cool HUGE equipment.  This is a double saw used to slice eight foot logs into lumber.  Sitting over a pit (or maybe on the second floor of a building), the bottom half would be below, out of sight. 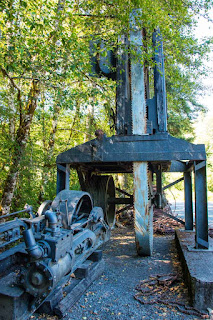 This being a Double Saw, the long continuous blade would have teeth on both sides so it cut coming and going instead of having to reset.  This amazing piece of machinery cut millions of board feet of lumber for 48 years, finally coming to a stop in 1977. 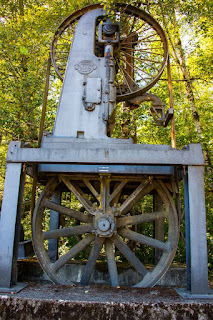 Here's a picture showing how it would have been used to cut logs into manageable sizes.  These machines were pretty temperamental.  Each saw had it's own idiosyncrasies to be learned by every man who worked on or around her in order to stay at maximum production.  If she wasn't treated nice, she could cause MAJOR problems.  Sound like anyone you know?? 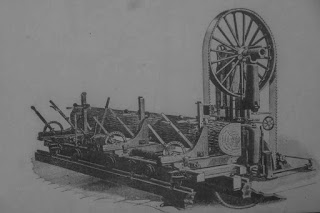 This is some scary stuff, working where this blade was going around so fast it could cut your arm off in a second!!  Even though the men worked behind metal shields, this was a dangerous job!!!  Well before OSHA, I'm sure!!  Powered by a 300 hp power electric motor, the blade moved at over 9,000 feet per minute.  You can imagine the devastation if something in a log caused her to come undone! 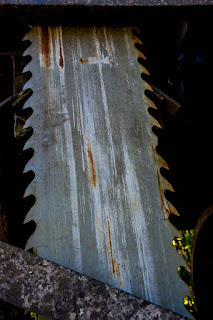 The Ohio Steam Crane is another biggie ... the undercarriage here weighs in at over 90,000 pounds.  This is probably what was used to load all those massive boulders for the jetty, not to mention loading logs on trucks and trains for the trip to the sawmill. 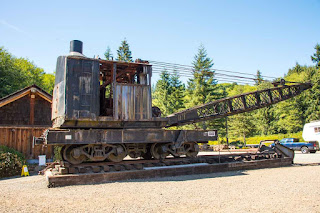 Used to drag logs and equipment around, this steam donkey is the biggest I've ever seen!!  The sled it rides on has logs that are taller than I am!!  I wonder what was used to move IT around??  I seriously don't think there is a tractor big or strong enough to move this baby!! 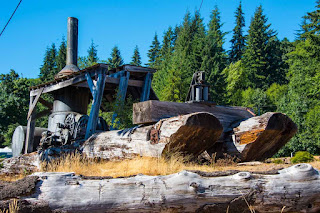 For those not interested in heavy equipment (I realize I'm odd in that respect), there is always an unusual picture to be found among the rust, including the rust itself.  These little weird green ferns were growing from the dirt in the tracks!! 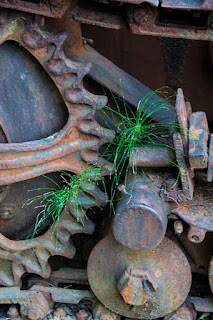 Waterwheels predated the electrical company around here, providing electricity to a farm near Jewel Oregon.  This farmer used a turbine first, but fish kept getting stuck inside, causing it to stop, so he decided to make this waterwheel instead.  It provided all the power he needed at his home for over 10 years. 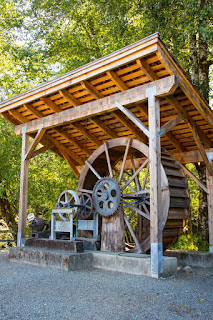 You don't see many steam train/equipment water towers intact any more, but there's one here, and she's a beauty!!  Besides that, like everything else around here, she's BIG!!! 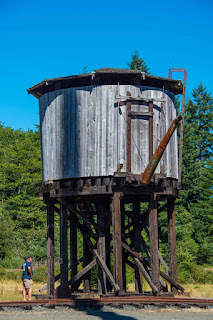 To enter the restaurant, just pull on the ax attached to the 500 pound solid wood door.  Hand carved, these beautiful doors make for a spectacular entrance.  As you enter the room, you wait in front of the Stump ... the cash register stand that was once a ten foot wide tree stump!! 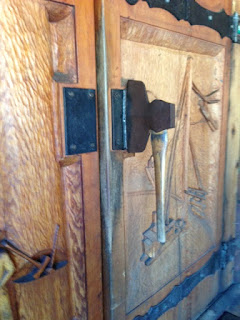 Once inside the restaurant, we found it was built from some of the biggest logs in the nation.  That ridge pole over Dan's head weighs in at 25 tons and is 85 feet long.  Although our waiter seemed to be in la-la-land, getting three out of five orders wrong, the food was excellent. 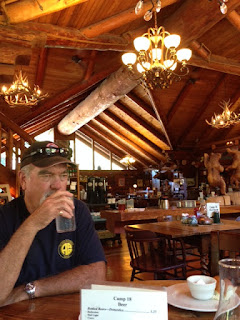 My country fried steak and mashed potatoes were perfect and Patty's clam chowder bowl was enough to feed three people.  Guess what I'm having for breakfast!!  Besides good food, we were entertained by the squirrels eating sunflower seeds in the many containers hung outside the windows. 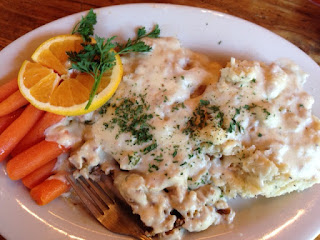 Just East of the restaurant is the Loggers Memorial, but we ran out of time.  If you're ever on Highway 26 from Portland to Seaside, be sure and stop in at Camp 18 and check it out!!

Another great adventure under our belts, and new oil in my car from yesterday's early $39 oil change, Patty and I will probably head back to Ilwaco for another farmers market day!!