I had a lot of errands to run yesterday along the Northwest coast and in anticipation of a good wind in the afternoon, I made the rounds fairly quickly.  I picked up an amplifier I had ordered, at the UPS store in Warrenton Oregon, that hopefully will give me a little better WiFi coverage.  The antenna will have to be professionally mounted, since it involves drilling a hole in my roof. 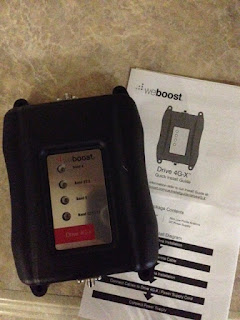 Next up was Petco for dog food.  Why is it I never get out of that store with less then $100 worth of stuff?  My puppies seem to have a tenderloin appetite for the most expensive dog food, and I can't seem to pass by the bin full of toys without squeaking every one.  At least I'm not alone in this ... the Chance residence has a floor full of kitty toys!

Next stop, since I was almost to Seaside, I might as well go drool a little more over the kites!!  Parking spots were at a premium along Broadway street, so I had to go around the corner.  Wouldn't you know, the only spot available was in front of Sea Star Gelato. 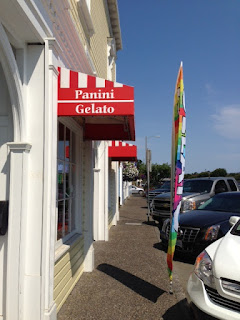 I can't pass up an ice cream store any more than I can the squeaky toy bin, so I slipped in the door for some chocolate peanut butter yumminess.  I don't know where the peanut butter went ... I only tasted chocolate.  Nonetheless, it was a tasty treat!! 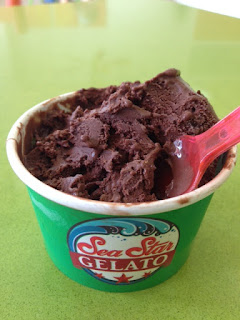 It was getting late, so I raced back across the Astoria Megler bridge to Washington, stopping at the Seaview Post Office for another package.  This is an important one .... it's a bobbin winder.  My weaving is dead in the water until I pick up this one, but alas, it had not arrived.

A quick bite of sandwich and there was a knock at the door.  Nick and Terry Russell were ready to go kite flying.  After my disastrous day last time, I wasn't sure I would fly again, but they both said I had to get back on the horse and try again, as did one of my readers, Jim.  When the sun shines, make hay and when the wind blows, go fly a kite!!  Funny, I used to hate the wind!!

It was blowing stronger this day, as we set up at the main section of Long Beach.  This is where all the great kite flyers will be showing off their stuff at the Washington State International Kite Festival (WSIKF) next week.  The entire area is cordoned off in sections, getting ready for the flyers, so we trucked across a half mile of sand so as not to be near the steel posts that can wreak havoc on our downed kites, nor did we want our crashing kites to bother the professionals.

A few minutes after I got set up, an ambulance showed up with the beach patrol.  I never did find out what happened, but they took someone off on a stretcher.  Though there is a HUGE beach here, the longest in the world, there is no swimming allowed as the currents are treacherous.  You might see someone with their feet in the water, but that's about it!!  Around here, it's all about tans and sandcastles ... and kites of course!! 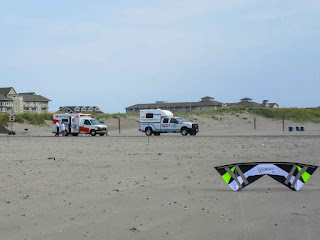 The group we have become acquainted with was again on the beach, with two more people added.  There are six kites flying together here!!  That's crazy!!  Don't their lines get tangled up you ask??  Yes they do ... but the lines are so slippery, you can keep flying until you reverse direction, untangling every one!! 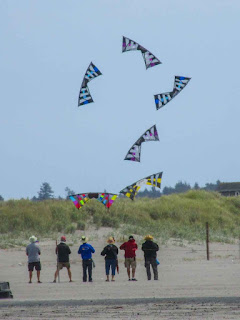 The gentleman on the left is Brett Morris, Regional Director of the American Kitefliers Association.  His lovely wife Diane chased Nick and Terry across the beach  ... seems they are Facebook friends.  Minutes later, her husband came to give us some tips about leaders and lines.  It turned into a full blown lesson that we all enjoyed immensely!!  Of course we still can't make the kite dance like Brett, but we were absolutely more in control when he left. 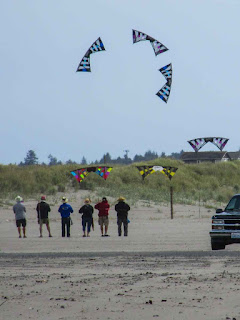 With two pounds of sand in each shoe, I trudged back across the beach to the car.  I kid you not, I left a huge pile of sand next to my car when I removed my shoes.  You might think there's no exercise involved in kite flying, but my legs will tell you otherwise!!

By the way, there is a GREAT building here that you must stop at if you are in the area.  It's called the World Kite Museum.  Even if you have no interest whatsoever in kites, stop in and see the exhibits.  They have amazing kites from all over the world, some made of paper and so intricate and colorful, you won't believe your eyes!

It was a great kite flying day, and I'm happy to announce I won't be trashing my kites.  In fact, I can't wait for the wind to blow again today!!!