Weekdays just pass by too fast, before the dreaded noisy weekenders invade the park like ants on peanut butter!!  I occasionally break a few rules, but nothing like the crowds that our Thousand Trails management now allow into the campgrounds.

I would imagine they get the same list of rules that WE get upon arrival ... but maybe they can't read.  Although there are many spaces available in the park, this guy, along with two vehicles and a third towing a boat, set up camp in the Overflow Parking area, taking up the equivalent of three sites.   Little does he know, the entire park including me, has been walking their dogs in that area.  Just before 6:00 am he started up his generator that he has hidden under the trailer.  Really??  You really think we can't HEAR that?? 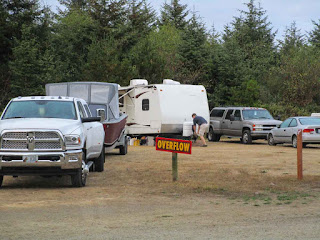 By the way, of all the people who have walked their dogs there, only two of us have been nice enough to pick up after them.  Yup ... he parked in the "poop" lot!!

Along with all the weekend rigs have come dozens of pickups pulling boats since the salmon are running, not to mention the kids running around on bicycles at breakneck speed.   I often wonder how the kids were able to drive the rigs here, since I never see any adults!!  What I did see was three kids, maybe seven years old, pulling a wagon around the entire park with a one year old sitting inside trying to stay upright.  Nope ... not a parent in sight!

The first month I was on the road, I didn't run into any of this, probably because I was staying at Elks Lodges or "real" RV Parks.   Stay inside or go somewhere else is what people will tell you, because the managers of these parks don't care about the rules, only the income.

I know ... live and let live ... until the generator starts up, the kids start screaming and I step in something a dog left behind!!!

The only good thing about yesterday ... and it was exceptionally good ... was dinner at the Golden Luck in Astoria with the Chance and Russell families!!  The food was delicious with huge portions and came to all of $9.00.  I'll definitely be back there for more!!  In fact, I'm having leftovers for breakfast!! 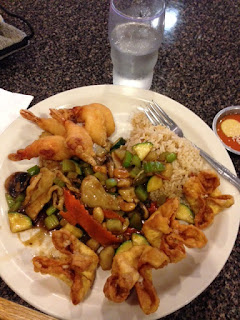 We're hoping for wind today ... yesterday was overcast with wet drippy stuff coming from the sky.  I wasn't in the mood to be electrocuted, so the kites stayed in their bag.  The Ilwaco farmers market is on again today ... a needed diversion from the dreaded weekenders!!