The wind completely disappeared yesterday ... no kite flying ... so I decided to make some chocolate chip cookies.  That's a dangerous endeavor for me, especially in such a confined area as my RV kitchen, but they come in handy when it comes to "can you fix this for me" favors.

Within 10 minutes, after the first batch was in the oven, I broke the cookie scoop gizzy I use to place them on the cooking tray.  Darn ... so much for my pretty round cookies.  It seems the handle skipped a cog so the spring slide (now in the wrong position) won't release the dough ... little did I know what a danger it was to become!! 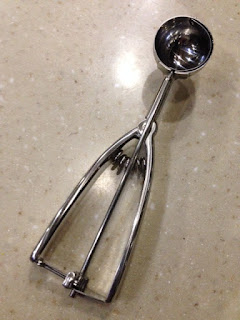 When the last pan came out of the oven, I bagged up a dozen and headed to the Chance house with the scoop.  I figured to ask Dan to help repair the broken device in exchange for the cookies.    Unfortunately, they weren't home, but Nick Russell stuck his head out the door to ask where the wind went and invited me in.

I explained my dilemma to both Terry and Nick, whereupon he took the aforementioned mechanical device and proceeded to trap his thumb under the sharp scraper.  I should have known better than to let him handle such a dangerous contraption, let alone a BROKEN dangerous contraption!!  When he tried to extract said thumb, the device tried to separate it from the hand!!  I muffled a laugh, as Miss Terry quickly unlocked it from his appendage, still intact ... lucky for Nick!!

I figured Miss Terry could fix it in a fast second, she's so mechanically inclined.  It took all of TWO.  One quick swipe with a screwdriver and she handed it back to me  ... repaired!!  Nick got a cookie for his almost-severed thumb, Miss Terry saved the day and we all had a good laugh!! 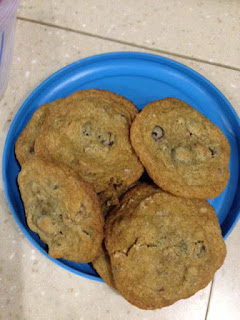 I played with the dogs in between weaving and watching the bad drivers come into the park and run over orange cones surrounded by broken concrete blocks.  OUCH!!!  There have been many boats pulled over the concrete pieces by fishermen, here for the salmon season.  According to my neighbor Kenny, fishing has been good.  He limited out every day and left with a big freezer full in the back of his truck.

Then there are the weekend warriors who can't seem to make the turn, loaded up with noisy kids, bicycles to match and lots of critters... including a pug, along with his sister kitty that I caught running loose!!  You can definitely tell the weekend is upon us!! 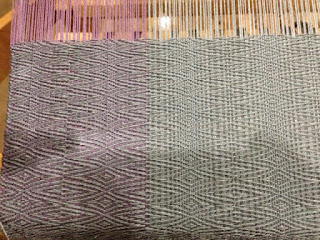 About 4:30 we all headed down to the Lost Roo Restaurant in Long Beach for another round of Prime Rib Dinner.  This time Terry and Patty had crab melts ... delicious they said ... and I had a bowl of tasty cioppino.  There's nothing better than good food and great company!!

Today the wind is predicted to pick up, after the rain quits falling, so you will find Nick, Terry and I back on the beach practicing our kite flying and crashing techniques!!  All three of us have improved quite a bit, this being maybe only the sixth time we have flown!!  Unfortunately however, we will be at the "kids table" a little longer!!