You probably get the picture ... it was raining early in the morning, which then turned to a heavy mist and by mid afternoon was back to rain again!  You never know what the weather will be up here on the Northwest Coast from one day to the next.  That's okay however, because I LOVE the rain!! 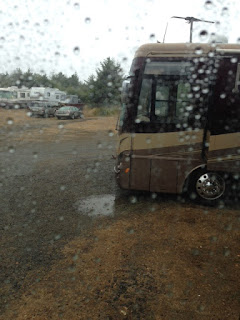 It's Saturday, Ilwaco Farmers Market Day.  Since Dan hadn't checked it out, he played chauffeur and drove us over to find the Garmin Tuna Fishing Derby in full swing.  That means there wasn't a parking spot in sight!!

Down by the docks, we found this BMW being towed.  You don't spit into the wind and you don't mess with the market vendors around here.  That's the tow truck driver you see trying to figure out how to get a chain attached so he can tow the car out of the way. 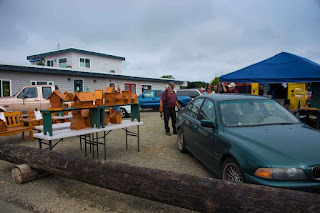 Smoked Salmon Chowder is always on the menu here.  I haven't tried it, but he always seems to be busy.  For $5.00 a cup, it's worth taste testing!! 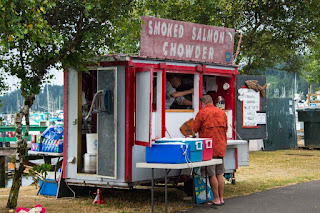 This vendor had lilies for sale in pots so you can grow them yourself.  Tons of lilies!!!  We oohed and aaahed but kept going.  I already have too many growy things in my rig. 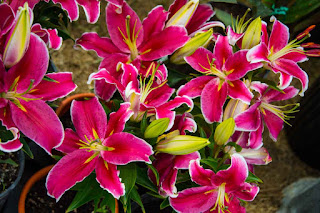 The locals definitely have a sense of humor around here.  This is the fish market, and they want you to know they are open every DAMN day!!! 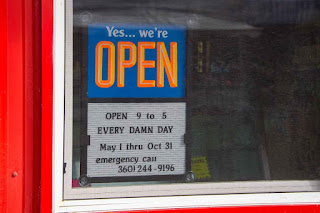 Although a little hard to find from the dock side, the Purly Shell fiber arts store has lots of yarn for knitting and fiber for spinning.  Can you believe it??  I passed on this one ... didn't even go in the store today. 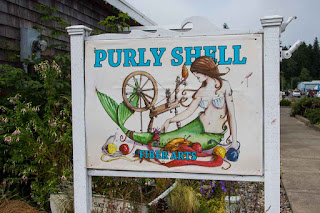 These glass balls you've seen before.  What I honed in on was the Tulare Chief Produce label.  I used to see these a lot when I was a kid growing up in the central valley.   These boxes are worth a chunk ... but this vendor just uses them to display his wares. 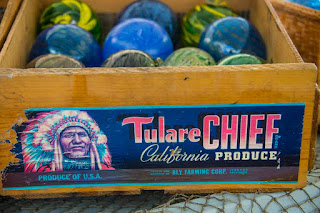 Back to the car that was getting towed for parking in a No Parking On Saturday Zone ... since he couldn't get the chain hooked to anything under the car, he just backed his truck up until the bed was beneath the rear end, lifted up and drove towards the back.  Yikes!!  Glad that wasn't MY car!!  I guess the owner has done this before, but won't he be surprised when he returns and doesn't find his car!! 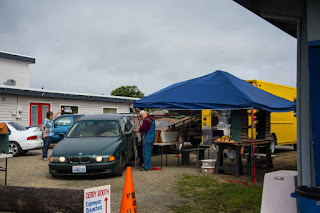 From the market, Dan drove up the North Head Road to Beards Hollow.  Originally, the Chinook Indians searched the tide pools for dinner crustaceans.  Later, bathing beauties and gentlemen spent afternoons on the rocks enjoying the water and sunshine.

This is the same spot today.  When the Jetty was built, over time it changed the water and sand patterns, filling up the beach.  It didn't take long for the trees and bushes to take over!! 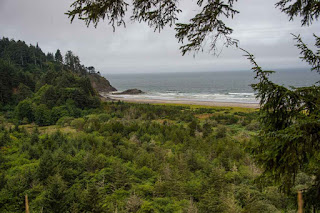 Heading back to the rigs, we spotted a deer on the side of the road.  I just couldn't get my camera out fast enough ... it was a deer butt kind of day!! 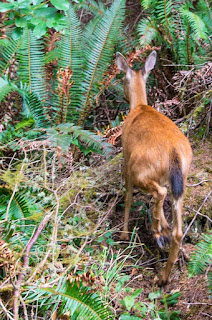 While Patty and Dan went to Jake's birthday party in Long Beach, complete with several bands that played most of the day, I stayed in.  Originally, I thought I might get a chance to redeem myself with kite flying, but hanging on to a direct connection to lightning in the sky, probably wouldn't be a good idea.  Not that there was lighting, but I wasn't taking any chances!!

I warped my loom with the next project.  Talk about a learning curve!!  I'm going to write down every single step on a card that I tape to my forehead so I don't forget something ... like the two outside strings.  There's an awful lot of math involved in this!  I know I'm an accountant ... but that doesn't seem to help me any!!

In the late afternoon when the rain was coming down nicely, I made a quick trip to the grocery store for extra supplies in case it continues, like cake mix and heavy cream.  The small store is limited on many items, so hit a Safeway before you come across the Columbia River!!  Just about home, I spotted another deer butt, a beautiful doe.  Did I mention it was still raining?? 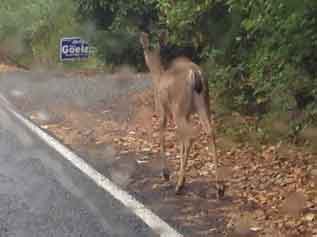 The sun looks like it's going to shine today, which is good for me, as I have to drive to the Seaside kite store, Northwest Winds.  No, I don't plan on picking up another kite ... but I do want some short lines and sleeving, which I can find there while trying to pick Ted's brain for more kite flying techniques!  Like Jim M said, it's the same as falling off a horse ... just get back on!!

Posted by Nancy Kissack at 7:13 AM