I thought there were lots of dogs around our Thousand Trails campground ... and there are ... but nothing compared to the dogs at the Ilwaco Famers Market.  There's big dogs and little dogs, old dogs (not the human kind) and puppies, all clamoring for attention, except this guy who just laid down every chance he got! 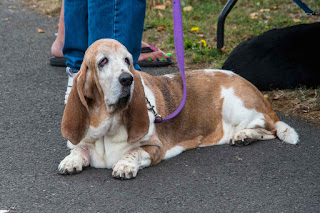 This baby has her own chair, but it was warmer on mom's lap under the blanket.  When I started to walk away, she stood up on her hind feet ... which got her lots of love and pets from Patty and I. 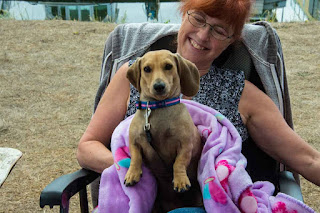 We've been here so often, we know the vendors by name and had a good time chatting with them!! 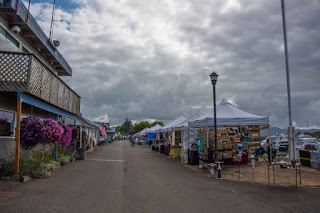 The harbor was beautiful as the clouds and fog finally started to clear.  It turned out to be a gorgeous sunny day, even with those barking dogs!! 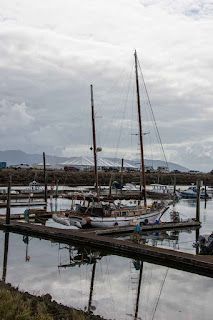 When we got closer to the water's edge, I saw two baby birds hunting for breakfast.  Can you find them in this picture?? 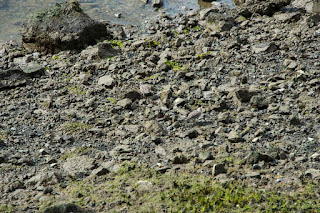 Talk about camouflage ... these babies have it in spades!  He's even hard to see in this closeup! 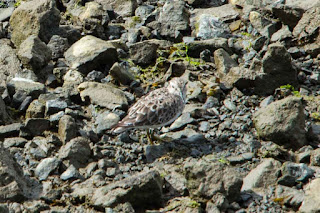 The cosmos flowers were in full bloom along the dock, making their own tie-dye pattern.  I've never seen flowers with such vivid colors as what grows here along the coast!! 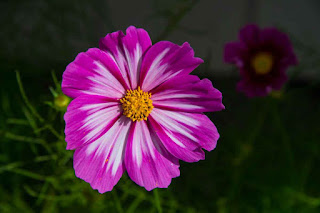 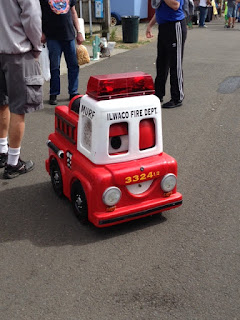 About 3:00, Nick, Terry and I hit the beach again for some kite flying.  It's getting close to the start of the Kite Festival, so many static kites were up and the beach was very crowded.  People walk around the fenced area with their dogs, taking in the sights.  Trouble is, many are NOT on leashes and many MORE think it's fun to bark at the kites .... constantly. 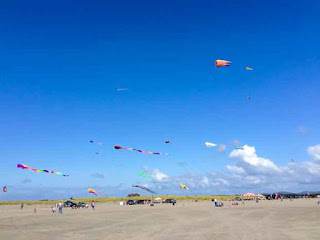 When you're trying to concentrate, there's nothing worse than a barking dog at your back.   When Jim (a professional flyer) came over to show me how to set up without kneeling in the sand, I was thrilled and tried to pay close attention.  Rev flyers are GREAT people!!  Unfortunately, it didn't take long for Miss Terry and I to crash together!!  RATS!!!  Finally up in the air again, with the yappy dog still barking, I couldn't get anything right.  With my kite spinning and crashing,  I packed up and said goodby to the barking dogs and crazy crowded beach.

When I got home, I went to "our" beach to practice, where I was actually flying upside down a little, hovering and having a great time ..... UNTIL ..... two dogs came running out on the beach, barking and chasing my kite.  I heard the owners yelling, but the dogs paid no attention.  Then the wind quit .. YIKES!!   More yelling with no results!  Finally, I hollered "if you don't want to buy a $400 kite, you better grab your dogs!!", which got their attention.  The owner rushed over, grabbed the collar and drug it off towards the water.  That pretty much ended my flying day.

Back at home, I ran into dogs of another kind ... the fisherman type, who are dry camping across from me, running their generators constantly.  Unfortunately for all of us camping here, the office says they can run their generators from 7 am to 11 pm, no matter who it bothers.  Nice response, huh?  As to the four vehicles, plus two boats attached to one site (each site is only allowed ONE extra vehicle), I guess the office has difficulty with arithmetic ... and they wonder why their Trip Advisor rating is in the toilet!

I think I'll just stay inside and turn my TV up until my patience quotient rises at least 50%!!  It's definitely something I need to practice besides kite flying.  Maybe I'll cook something for the fishermen!!!