I'm pretty sure everyone is well aware of my first BIG burial ground out behind my house in California.  That's the one I use for all of the failed cooking adventures that happen almost on a daily basis!!    I'm afraid I may have to add another one here in Washington State for my kites!!

It started out a beautiful day, but began to go down hill quickly!!  Since I don't have a project on my loom, the first order of the day was to warp some yarn.  That means winding yarn on this contraption hanging from my shower door.

First off, it sticks out into the hallway just enough that I whack my head on it if I'm not careful, which I wasn't on this morning!!  Then, after wrapping over 100 strands, it suddenly dawned on me that each full wrap is TWO and I forgot to divide the required number in half.  RATS!!!  Unwinding is certainly not as easy as WINDING ... as 50 wraps had to come off.  By the time I was done, I had a huge rats nest at my feet.  I gave up for the day!! 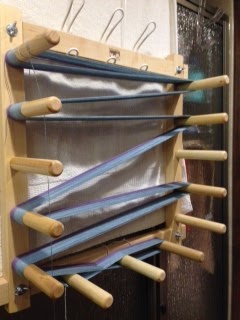 Since I didn't have enough heddles ... those little metal things on a loom ... I ordered some from Eugene Oregon, which should have arrived at the post office.  Around 1:00 I made the short trip, picked up my package ... YAY NO PROBLEMS ... and drove to the beach where I knew these nice people would be flying. 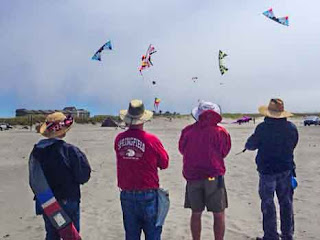 Some of the big kites were out, tied to vehicles around the beach.  Silly me, I had worn my sunglasses, so I couldn't see my phone's screen in taking these pictures.  It's actually VERY foggy (I took it out in Photoshop so you could see the kites) and cold with a strong wind.  It didn't take long before I was headed back to the car.  They said I needed to practice my hover for hours.  GOT IT ... and off I go!! 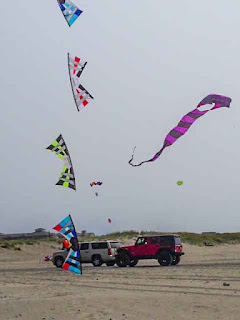 Back at the rig, I grabbed my kites and headed off to the beach.  In two seconds, I got a phone call from Nick saying he KNEW I was going to fly my NEW kite while he had to work!!  No Nick ... no new kite ... YET!!!

First off, I'm really new at this kite flying business, and it's a LOT harder than it looks.  I get to the beach and set up my ultra light kite with the lines I really did NOT want to use.  No time to switch them, I need to practice!!  I could fly it, but it was always screaming off one way or another and eventually crashing.  Too much wind I think.

I switch to my high wind kite with the same lines.  By now, the wind has died down a little as I'm enveloped in fog and I can't get my kite in the air.

I switch BACK to my ultra light (not an easy task) and apparently got something in the bridle (the lines that attach directly to the kite) turned the wrong way.  I couldn't do anything right.  I crashed over and over, it folded in half several times, the lines felt wrong ... I'm throwing this in the TRASH and I'm NEVER FLYING AGAIN!!!  I tromped back to my rig and sulked!!!  I can't tell you how frustrated I was!

In the meantime, to make matters even worse, I have been bitten by something all over my shoulders.  No idea what, but they itch like crazy!!  Nothing like adding insult to injury!!!