The weather has warmed up considerably in Tillamook, so yesterday I thought I would cruise south until I hit the coast, then head back north by the water's edge.  This is Cape Kiwanda, one of three capes I visited.  There were quite a few surfers and this paddle boarder trying to catch the waves. 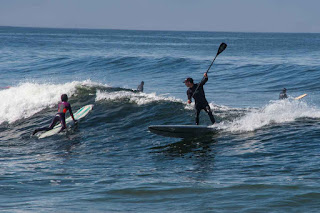 Known as Haystack Rock, the real name is Chief Kiawanda Rock, a sea stack is located right in the middle of surf city.  On the very far right of the rock, you can see a small natural arch. 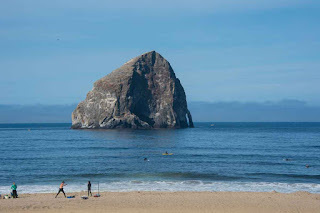 As with most surfers, they just paddle out and sit on their boards as loads of waves pass them by.  This guy, encased in a neoprene wetsuit (looks like Cat Woman to me) to keep somewhat warm, gave it a shot and did great. 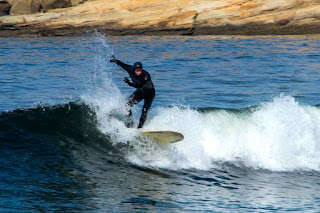 Well, almost great, until he had to dive behind the wave to keep from getting smashed into the sandy bottom!! 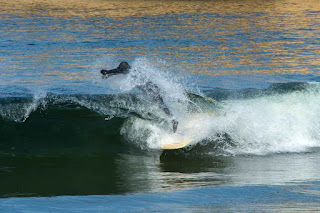 There were lots of vehicles on the beach, including one stuck pickup who wouldn't let me take his picture, and many tourists playing ... well, tourist.  This is an awesome beach if you need a place for a nap.  Further south is Pacific City, a sad community with most every business OUT of business and for sale.  In fact, the entire area is pretty depressed with hundreds of houses on the market, in case you were looking to pick up a beach house cheap!! 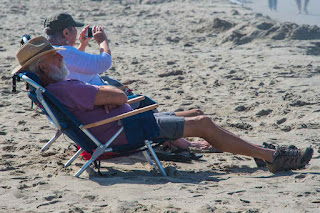 This is just past the second cape, Cape Lookout.  That one requires a 5 mile hike that I will get in next week when sufficiently supplied with food and water.  At this site there is a plaque honoring Dick Gammon, pioneer hang glider, who jumped off the mountain from the brown grass area in the bottom right corner.  I don't think I could get up the nerve to do this, but I bet it was an amazing ride!! 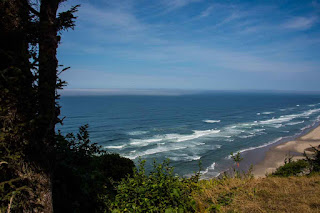 I kept going north around Netarts Bay, stopping for this picture as I came into Oceanside.  In the background are three arch rocks (more seastacks), with only two arches visible.  There's not much along this road in the way of touristy shops ... only tons of houses perched on the hillside. 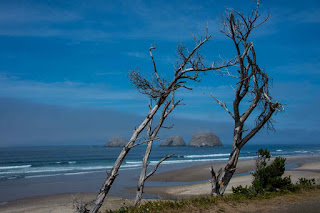 The road to Cape Meares isn't a very good one ... don't bring your big rig RV up here.  Not only are the roads rough (and I mean RoUgH) and narrow, there's not much parking when you get there. 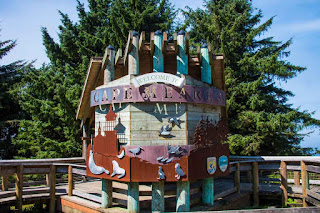 The last cape is the location of Cape Meares Lighthouse.  Built in 1890, the original fresnel lens was made in Paris and shipped around the horn, to be installed here.  Before they could do that however, they had to build a log plank road on which to drive the trucks with all the supplies. 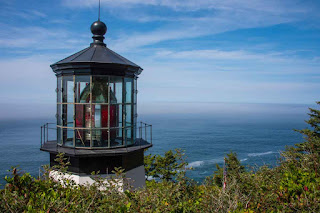 This lighthouse is the shortest on the Oregon coast at only 38 feet, but it sits on a 200 foot high cliff.  When lit, the light could be seen 24 miles out to sea.  Designated a National Historic Site, the light was turned off by the Coast Guard in 2014, as it is no longer needed, since every ship now has GPS.  It's a sad fate for lighthouses of the U.S.  Hopefully they will still be maintained. 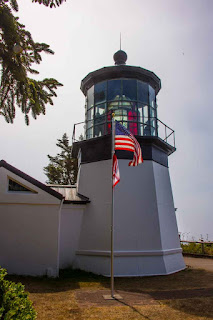 Luckily the lines were short to climb up inside and I was added to a tour immediately.  The light, held in place by this round metal drum, turned around once every four minutes, by a grandfather-clock type counterweight that had to be reset every 2-1/2 hours.  Now that must have been a boring job ... sitting at the bottom until it was time to reset the weight. 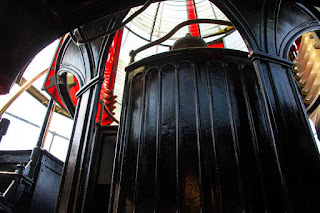 On a previous trip, we learned that some idiot drunk 20-yr olds shot out many of the windows around the lighthouse, severely damaging the fresnel lens.  I'm happy to announce they were caught and ordered to pay $100,000 restitution (deducted from their paychecks) and ordered to spend their three week vacation in jail, every year for five years.  You can see many bullets holes in the red lens here. 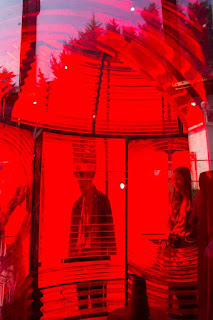 By the time I walked back to the car, the fog was coming in big time.  Still no wind to speak of for kite flying however.  There is another big sea stack on the right in the distance, but the fog completely covered it up. 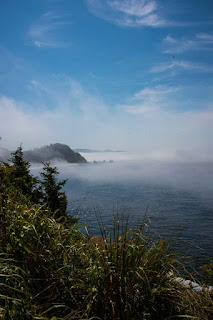 I haven't really seen too many sunsets on this trip, but a pretty nice one showed itself last night.  It's supposed to rain in the next day or so, as more and more clouds come my way. 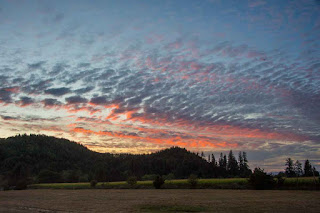 Just so you know I haven't been slacking, I've made two trips to the quilt store and the Tillamook Cheese Factory is on my schedule again today for ice cream!!!  Pictures will be forthcoming!!