If you're squeamish about bridges at all, these pictures may not be for you.  It's a long bridge to Long Beach where we will put down stakes at another Thousand Trails Park.  Early yesterday morning while the Chance rig fueled up, I continued on across the Astoria Megler Bridge from Oregon into Washington.  It's an amazing feat this bridge, and just as amazing if you can cross it without butterflies in your stomach. 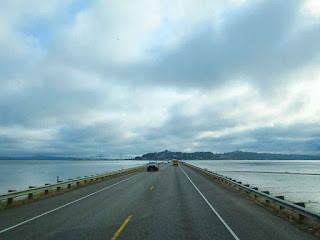 After the first half above, you drive around a corkscrew and up the ramp to the portion of the bridge that lets those big ships into the Columbia River.  There's quite a sideways slope to this section, causing me to white knuckle it when I got stopped at the worst possible spot a couple years ago. 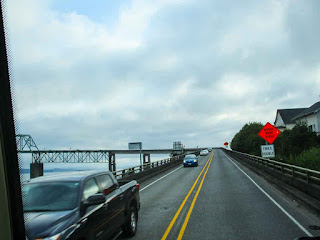 The car way ahead of me is at the very highest point on the bridge where it heads back down. 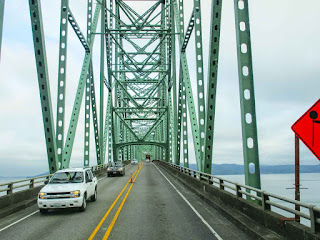 As usual, there is construction going on, but at least it's further down the ramp instead of at the beginning where it was two years ago.  That's progress!! 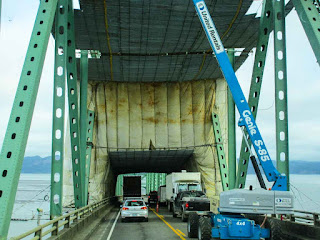 Still in the construction zone, which is why I'm driving in the left hand lane, I headed downhill rather quickly and out on to the flats. 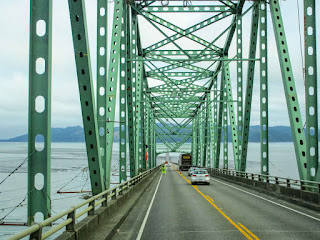 I actually had many more pictures, but as usual, the internet service in this park is nonexistent.  My poor little Sprint MiFi either has NO bars or is roaming at a terribly slow pace. 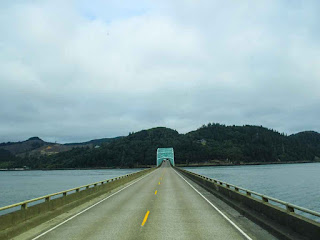 Once on the North side of the bridge, it seemed like I was the only traffic around!!  Through the tunnel and around a few corners and voila!!!  I'm in Seaview before I know it ... the outskirts of Long Beach!! 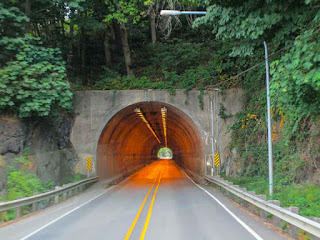 I sought out a particular site Nick Russell and his beautiful wife Terry spotted a week before when they were here, and after unhooking my car, sat like a vulture, just waiting for them to leave!!  In the meantime, I scouted for a Chance site, as well as one for Nick who is coming up today.  I think I'm going to play the "phone-to-my-ear ... he's-on-his-way trick"!! 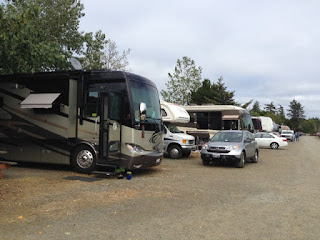 Once settled in, Patty, Dan and I went into town to Doogers for lunch.  Dan's burger was good he said and our salads with clam chowder were passable.   A quick drive to the world's longest beach found a suburban stuck not 30 feet off the gravel part of the road.  I sniveled and Dan turned around.  There's nothing worse than getting stuck in this stuff, which seemed heavier and fluffier than I've ever seen at a beach!! 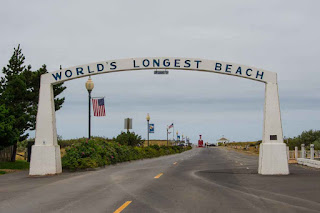 Back at the rigs, I took Miss Jessie for a walk to our beach.  It's rather a long walk, and after the first quarter mile, she put on the brakes and refused to budge, so I snatched her up and carried her until we got close.  When I put her down, she immediately did her Jack Russell thing ... she dug up a nasty dead crab and rolled on it before I could stop her!!  Bad Dog!!!!  A little leery of the water, she didn't want to get her feet wet, so we headed back home. 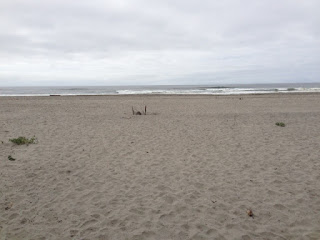 Not sure I will post every day due to the slow Sprint internet.  I may be having breakfast at McDonalds every morning ... I think they have WiFi!!

Posted by Nancy Kissack at 8:32 AM