Sometimes You Meet The Nicest People!!

If you look on a map of the finger of land sticking up along the Washington coast, you will find Ledbetter State Park at the very top.  Thanks to friend and fellow RV'er Betty Graffis, that was our destination yesterday afternoon.

When we arrived at the parking area, a very nice gentleman pointed out this bald eagle sitting in the tree above us.  He was a little far away, but I was able to get this shot before we headed down the trail to what we thought was the water's edge. 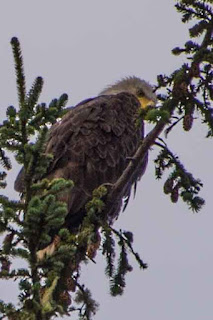 Turns out it WAS the water's edge, but with the negative tide, the water was about two miles away.  This was the mud flats.  Now isn't THAT a fine kettle of fish!!  We followed some human tracks around the edge, as we scrounged for seashells and driftwood.

All of a sudden Patty says BEAR!!!  Yikes!!!  We're in trouble!!  I followed her finger with my telephoto camera lens to find this mama "bear" raccoon and her baby cruising through the mud.  Okay, it wasn't a bear, but I give her credit for even being able to SEE the thing!!  Amid cranes and hundreds of other birds, she was trucking along looking for lunch!!  Not a great picture, she was just too far away. 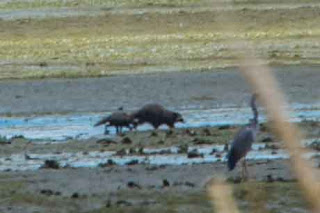 About that time, the birds started screaming and carrying on, causing me to become even MORE wary ... maybe there really WAS a bear out there.  I scanned the horizon with my camera again to find this beauty standing out on the flats.  WOW ... another bald eagle.  How cool is that??  (Sorry for the fuzzy picture ... they were just too far beyond my camera range.)  A little further along, I spotted ANOTHER!!!  We grabbed a seat on the nearest log and watched nature put on a show for us. 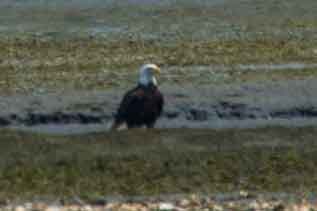 Time to go, we took the long way back, crossing around the inside of the bay, hoping to see a REAL bear.  We only saw four people ... two hikers and the two men I spotted out in the mud flats digging oysters or clams. 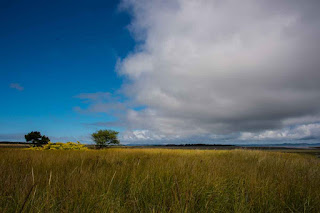 This entire area is a wildlife refuge covered with salt grass.  There really is water out there at the far end, you just can't see it very well!! 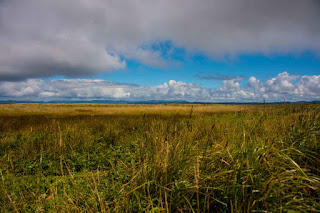 Once back at the rig with our goodies, we made plans for dinner with Terry and Nick Russell at the Lost Roo, an Australian restaurant in town that serves GREAT food!   Patty and Terry loved the portobello mushroom burger, while I chose Thai Peanut Chicken, yummy but a little spicy!!  The MEN had the prime rib special of course, and said it was awesome!!

From there, we came back home where I received a phone call from Nick.  They were down on the beach where a group of fellow RV Revolution kite flyers were practicing their moves.  It took me five minutes to get there!!  These gentlemen and one lady, are amazing flyers!!  So much control!!! 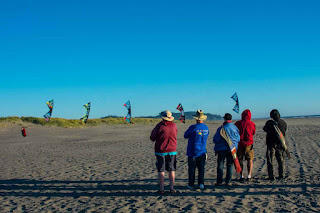 What a great group of people they were too, as most RV'ers and Rev flyers are.  They immediately showed us how to do some of their kite moves, as we listened intently, and then invited us to fly with them. 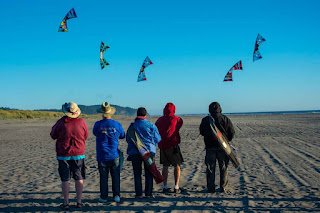 They crossed their lines every which way and were still able to fly with precision!!  It's amazing how the kites dance in the sky. 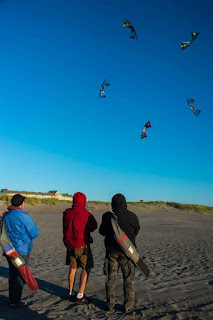 Their last maneuver was this one ... they stacked the kites and flew as one, then broke off one at a time.  If you ever get the chance, go to a kite festival, I promise you won't be disappointed!! 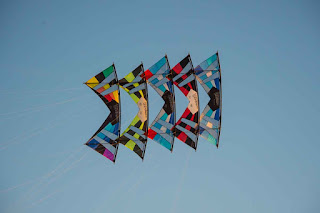 Watching them inspires me to fly even more, so today you will find Terry, Nick and I back on the beach.  We're going to be the new REV TEAM!!!  Just don't stand too close because I'm pretty sure there will be a crash or two!!!