One Is Never Enough!!!

You can never have enough kites.  That's the main thing I learned at the kite festival yesterday.  Everyone you meet asks what you fly and how many you have.  I think he (or she) with the most kites wins!! 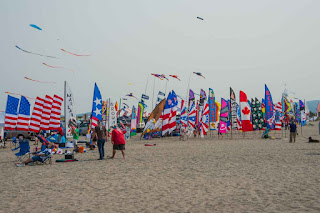 I arrived early and saw only one lonely figure sitting at a table eating something that looked delicious.  I couldn't pass up the biscuits and gravy, which were yummy.  Turns out, the stranger was Lolly Hadzicki, one of the owners of Revolution Kites.  We became friends immediately. 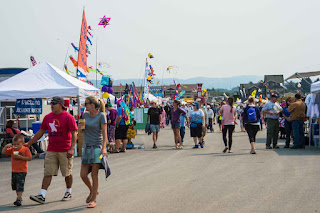 Lolly introduced me to Henry Dancy, one of the premier flyers from France who has over 200 kites!!   I have a long way to go!  He's speaking to another flyer from Vancouver Canada.  These are two of the best flyers in the entire world!  We had quite a conversation to my surprise and delight and they were full of flying tips. 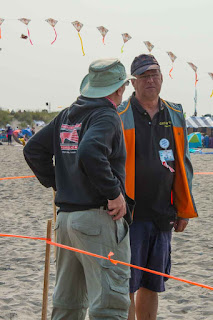 Lolly brought a Revolution Kite Simulator with her, tethered on bungee cords so people can get their first feel without crashing the kite.  I gave it a try, and even with no wind, it worked fairly well.  Both Mario and Henri gave it the once over too. 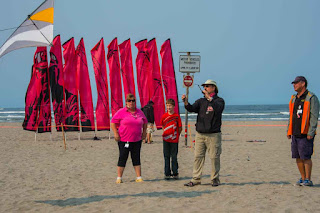 With a little help from an INDOOR kite flyer, I was able to pick up a few new moves.  I was in seventh heaven!!! 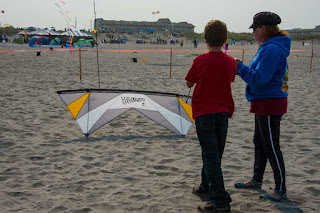 There are many different types of kites, including lots of single string cellulars like these.  Although a little difficult to get in the air, there were over 50 flying in this mass ascension, when the wind finally started to pick up. 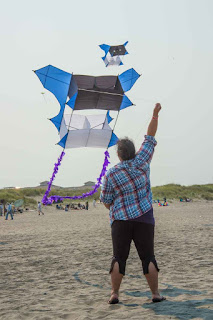 Once back on the ground, everyone got together for a picture.  There's some really serious kite flyers here!! 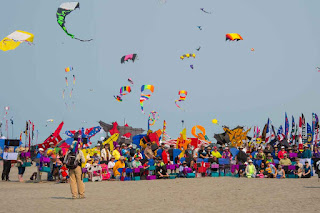 Then the sport kite competitions began, including this gentleman flying a revolution.  They are scored on how they complete compulsory figures to music, gathering points throughout the year.  With enough points, you are invited to fly at the invitation-only National Competition. 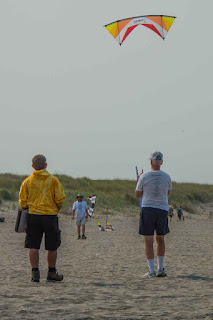 Revolutions are a popular kite ... so popular that they have their own field to fly in, roped off to protect the spectators.  These kites have carbon spars in them that can crack your head open ... especially if I'm flying!! 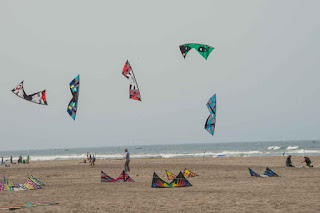 Here's the gang controlling the seven kites above. 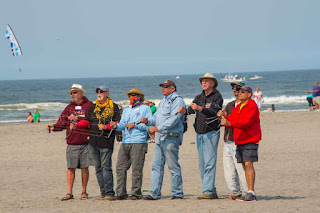 As you can probably imagine, this kite belongs to a newlywed couple.  It's signed by everyone who came by to say congratulations!!  Many times people order plain white kites, which are then hand painted with designs like lions and tigers ... just like RV's!! 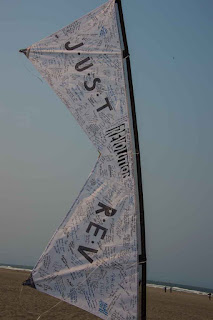 This is John Beressi ... also one of the best flyers in the world.  He's won everything there is to win, so now he flies mostly for fun.  On this day, he was teasing the children with his kite. 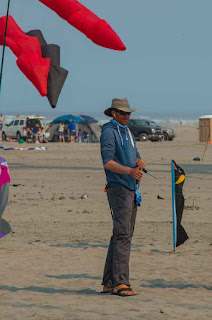 It's pretty spectacular to watch ... he taps the kids on the shoulder with the kite, then takes it away so they will chase it.  Of course they can never catch up, so he circles over their heads and lands on the ground, then takes off at the last second.  Here he came down fast, stopping just above them with a snap, to the squealing delight of the kids.  That's John controlling the kite on the very far left of the picture. 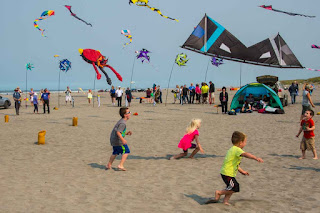 It was an amazing day on the beach that I'll never forget.  Once back at the rigs, the wind picked up even more, so I headed to our little beach for some flying time.  Here's the thing about kite flying .... you don't set up right next to someone who is already flying.  You know what happens when you do that??  You crash into MY kite ... and Nancy becomes an ogre!!

Even though I asked them to move further away, they ignored me, flying their two single string kites directly over my head, with no control whatsoever.  I just don't understand people sometimes!!  I packed up and headed home.  There's always another day.

About 7:30, Nick Russell tapped on my door.  Seems the wind has finally blown all the smoke from Washington fires over to the coast ... and the sun was a spectacular color of orange.  I grabbed my camera and ran to the beach for some GREAT pictures, which I'll post tomorrow.  The ocean was alive with millions of birds flying just above the water and pelicans were falling from the sky, catching dinner.  Just another day in Paradise!!!