Most kite owners are adults, but it's all about the laughter from the kids at this kite festival.  Nick, Terry and I went down to the beach yesterday to watch the Rokkaku kite fighting. 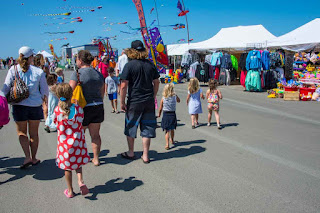 The entire road to the beach is lined with vendors selling jewelry, kites, clothing and the all important ICE CREAM!! 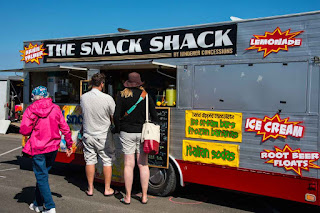 As we got closer, the crowds were beginning to assemble.  Definitely bring a chair and lots of sunscreen. 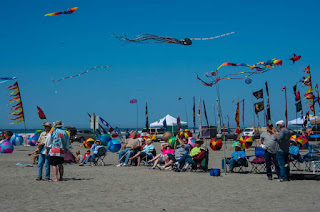 What could be more fun than kite fighting!!  Maneuver your kite around someone else's line, then pull yours like a saw and voila!!  You cut their line, sending them off into space.  Last man standing, wins the points.  It's the accumulation of points that wins the prizes.

This is Rhonda Brewer from Phantom Star Kites.  She made and painted most of the fighting kites we saw today.  Wear your Japanese Hapi coat and you will get extra points. 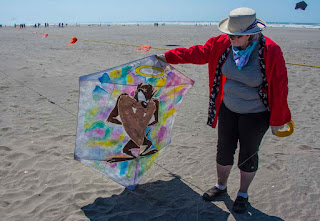 Here's the back side of the kite, made from tyvec material and either wooden or fiberglass spars. 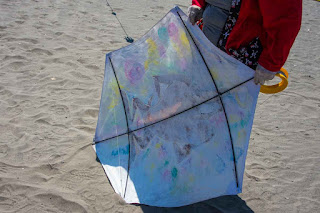 There's actually six kites here ... two are down for the count!! 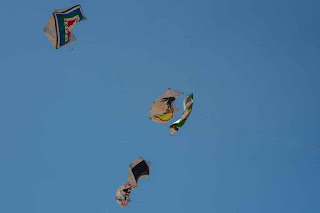 This is the team competition ... three people on each line doing a LOT of running around and laughing all the way!!  This kite thing definitely makes you feel like a kid again!! 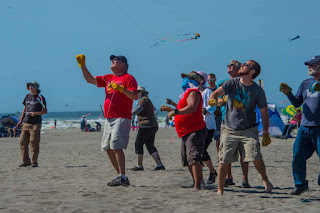 At the far end of the field, the Rev flyers were back in action.  Many of these guys will compete in competitions set to music, later in the week. 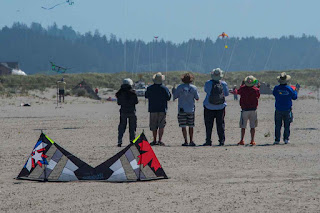 Here's a relatively new revolution kite ... called a Vicky, named after Victoria's Secret.  Can you guess why?? 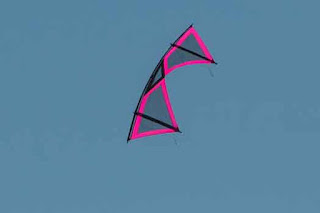 Back at the rig, a little dried out due to the sun and sand, I sat and people watched for awhile.  It always amazes me how people don't feel a need to follow the rules, I suppose because no one here at Long Beach Thousand Trails ENFORCES those rules.  In the trailer on the left are the fishermen across from me ... the ones who ran their generator at 6:00 am.  There is a burn ban in effect statewide ... meaning NO OPEN FLAME.  These guys ignored the rules and caught a huge section of grass on fire. 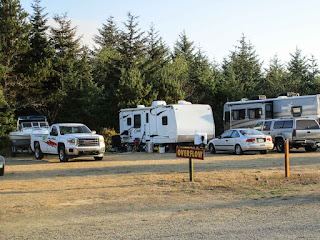 They parked their boat on top, trying to cover up the damage, but when they were leaving the next day, they had to do more ... so this guy spent quite some time moving the grass around so it wouldn't show.  Just before we left to have dinner, they started up not only a large barbecue, but a campfire!!  This time they were apparently reported and the fires extinguished.   Nothing like putting ALL of us in danger!! 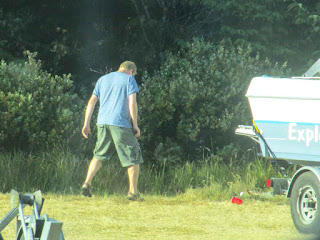 If you are a little short of cash and still want to camp, you can try this on for size.  I wish I had seen them setting this up.  Must be magic, because the entire left side is hanging out in mid air.  The only entry is the ladder!!  Pretty inventive if you ask me!! 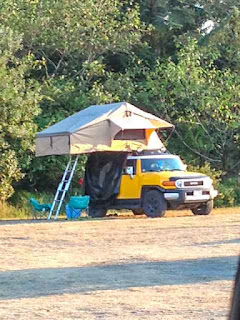 Today at the beach it's all about the kids events.  There will be pin exchanges, foster grandparent fun flying, races and lollipop drops, not to mention kite making fun.  I think it's time for me to rest up a little!!  Walking across a half mile of sand is hard work!!!