I was up early as usual, keeping a close eye on my neighbor who was leaving at an undetermined hour and hoping that Nick and Terry Russell made it in time to snatch up this great parking spot.  When I heard a large RV coming around the corner in the 8:00 hour, I ran out phone in hand to run interference, when to my surprise, I saw Nick and Terry driving in.  I'm pretty sure they have NEVER been up THIS early!!!

About that time, Patty called and wanted to take a walk on the beach to look for goodies.  I'm always up for that, so off we went, traipsing through the salt grass the two mile hike to the beach.  Yes it WAS two miles ... at least the long half mile felt like two!  I see lots of exercise in my future.  It was worth the walk however, when we found a negative tide and some amazing designs Nature had created in the sand. 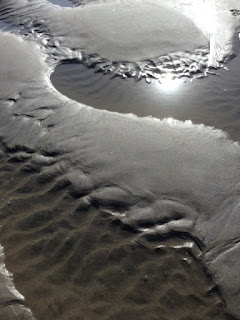 Hard to believe these were all on the same beach within 50 yards of each other.  When the water retreats, it leaves wonderful designs in the sand. 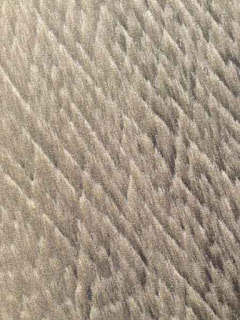 This is about half the distance the water had receded.  This little river was draining water from the upper beach to a big pond well above the surf line.  We slogged around looking for treasures, but alas there were very few to be found. 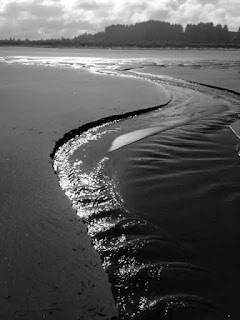 A little further up the beach Nature drew lines of green in the sand.  I have to admit it was yucky green ... slime actually ... but nature's artistry at any rate. 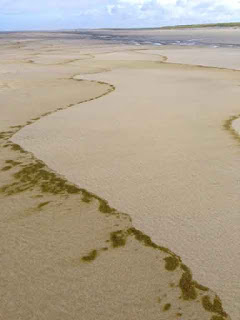 We were hoping for sand dollars, but found nothing but broken crab shells.  These birds scout the beach for crabs almost as big as they are.  I tried to save this one ... dinner for us ... but it was completely empty!! 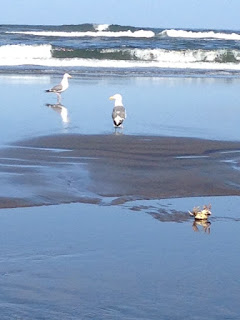 Back at the rig with our tiny bag of treasures, we jumped in the car for a quick trip to Jacks Country Store.  Along the way, Dan took a detour to the beach ... you know the one you can drive on and get stuck??  I'll give you three guesses!!  Did you get it?  Yup ... we did!  Dan said he wasn't stuck, but spinning tires, sinking back end and sand spinning out behind the wheels equals STUCK in my book!! 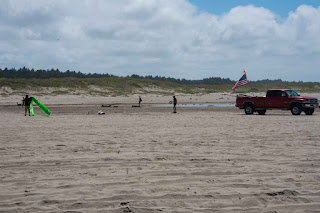 Before putting it in 4-wheel drive, he tried to back up and sunk even deeper.  YIKES!!!  Okay ... transfer case shift to 4-wheels.  He gently moved forward a few inches, then tried reverse and slowly backed up.  Free ... free at last!!  Dan turned around in about 8 square feet so as not to get stuck again and we went back to town. 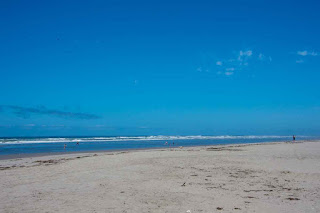 Now on solid ground, we went up to Oysterville and looked for RV lots.  There are quite a few available, one for $49,000 with septic already installed.  That's when we saw these babies!!!  Mom was pretty wary when we stopped and she kept a close eye on the Jeep. 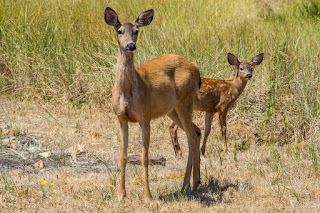 She finally walked slowly across the road to dense brush, where baby followed.  I just LOVE seeing these guys!! 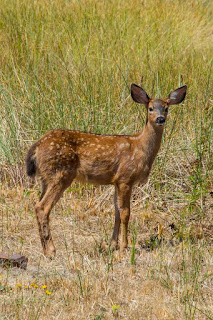 We stopped at Jacks Country Store, a real old time store with at least one of everything you could ever want, including bacon candy, a bacon wallet and bacon bandaids!!  How cool is that?? 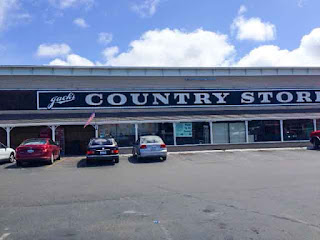 They even had oil lamps ... some beautiful vintage ones too!!  It's a hardware store, grocery store, paint store and home depot, all rolled into one. 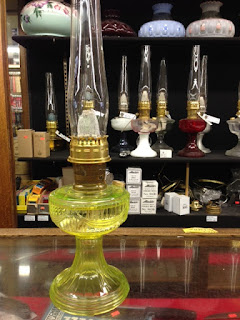 As soon as we got home, I got some bad news.  While trying to place an on-line order, my credit card was denied.  You know where THIS is going!!  Sure enough, there were several fraudulent charges from someone in Spain, charging train tickets to my account.  Luckily for the bank, they denied them all and called me.  My new card is on it's way.

The day ended perfectly however, as Nick, Terry and I hiked the "two miles" to the beach where we flew our kites for a couple hours.  Their two new kites called Revolution New York Minutes, flew great and they both looked like pros!!!

I was soon accosted by two little girls, maybe 5 years old who wanted to fly my kite.  It was hard to tell them "no, this is a very expensive kite" ... so I had each of them put their hands over mine as I flew the kite aloft and let them feel the pull, then set it back down.  I'm not sure mom was thrilled, but the girl's loved it, saying they had never flown a kite before!!!  It was just another perfect day on my permanent vacation!!