The only thing worse than no wind at the beach for kite flying, is too much wind and saying goodbye!!  It ended up being amazing on both counts!!

When Nick and Terry tapped on my door and said to come look at the sun Saturday night, I thought it was just another sunset.  How wrong I was!!  The smoke from the fires in Washington had hit the beach, making for a majestic sunset like no other. 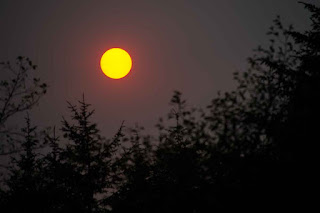 I grabbed my camera and flashlight and literally ran the half mile to the ocean to get some pictures before it disappeared below the horizon. 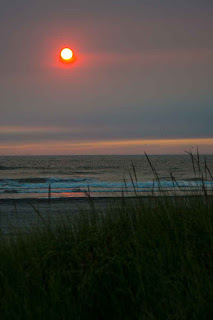 Too bad I didn't think to grab a coat.  The wind was blowing sand like crazy and it was freezing cold. It's hard to get pictures when you're shaking, but I stuck it out to the end!! 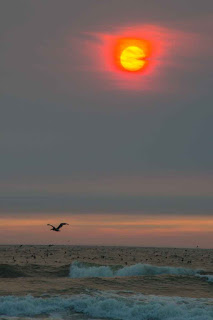 Upon closer inspection, the ocean was covered with waves of birds, flying a foot or so above the water.  Thousands of birds that just kept coming the entire 45 minutes I was on the beach.  I'm guessing there was a fish run of some kind.  Among the birds were pelicans diving over and over into the water, coming up with dinner. 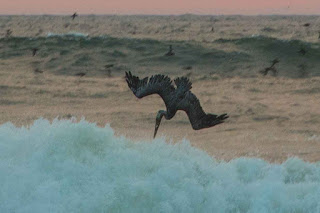 I took 161 pictures!!  I just couldn't stop clicking the shutter when I saw this through the viewfinder.  It got better and better every minute!! 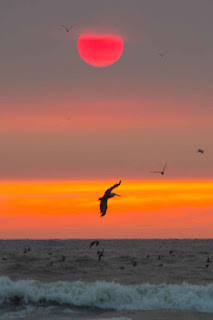 Slowly, the sun began to sink behind a fog bank, looking like molten lava.  By now the beach is full of people, all amazed by the sight unfolding in front of them.  Sometimes Mother Nature puts on a spectacular display!! 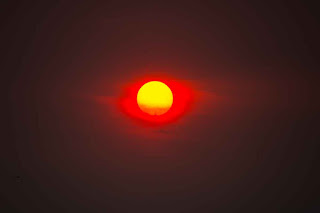 Once behind the fog, the red-orange light lit up the sky as we waited for it to show itself one more time. 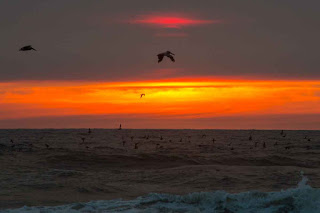 As the brilliant yellow sun finally fell below the horizon, I said a sad goodbye to one of the most beautiful sunsets I've seen in my lifetime!! 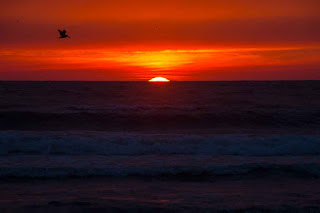 I spent most of yesterday putting things away, washing the windshield and dumping my tanks.  Unfortunately my puppies were both sick again, but I think I found the problem.  A bag of dog treats seems to be the culprit.  As soon as I gave them one, Cooper got sick.   Jessie followed not long after, so all the treats went in the trash.

The saddest part of the day came when I had to say goodbye to Nick and Terry.  The BEST part of the day was when I was invited to a going away dinner ... lasagna, garlic bread and salad!!  When Nick says Miss Terry is a great cook, he means she is an OUTSTANDING GREAT COOK!!!  Believe it or not, I even got a batch to go.  I apologize, but I'm not sharing and I'm cutting it into five pieces to make it last longer!!

After lots of stories and much laughter from a memorable week, we said our fond farewells as I head South to Tillamook this morning.  I hope I can find a place to fly my kites.  If not, I will console myself with the best lasagne I've ever eaten!!!  Thank you Miss Terry and Nick for your friendship and answering all my silly questions about looms, weaving and kite flying!!  It's been a wonderful summer!!  I'm really looking forward to seeing the Chances and the Russells in Arizona this winter!!

Posted by Nancy Kissack at 6:41 AM