As much as the weather forecasters said there would be wind yesterday, there was little to none here on the Washington coast.  Definitely a big disappointment, since I am finally seeing some improvement in my kite flying!!  With no wind, there's no kites ... not even down at the festival!!

When the sun shines, make hay, which wasn't going to happen either with the fog and clouds, so I went to see an even bigger Cape Disappointment on the north side of the entrance to the Columbia River.  It was named by British fur trader John Meares who turned back at this point, missing the discovery of the Columbia River in 1788.

The first stop was Bell's View, which overlooks Long Beach far into the distance.  This trek was about a mile, and honestly, not worth the uphill climb! 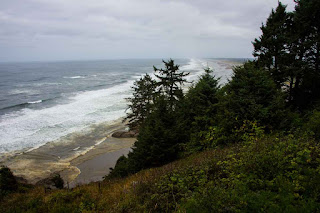 Next up, North Head lighthouse, just around the corner.  Constructed in 1897, the Lighthouse Keeper stayed in this beautiful home.  Immediately there arose a problem.  With the light burning 30 gallons of fuel a night, one man couldn't keep it lit around the clock. 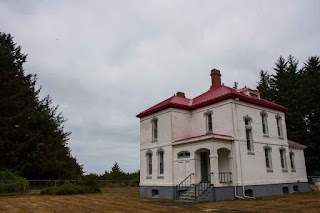 Two Assistant Lighthouse Keepers were immediately hired and given quarters in this matching duplex.  In 2012 all of these buildings, including the lighthouse, became the responsibility of the U. S. Coast Guard and are now available for vacation rentals. 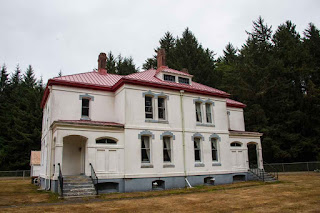 Ships coming from the North, couldn't see the Cape Disappointment lighthouse because of this rocky outcropping.  Many times they missed the entrance to the Columbia River, risking loss of life and limb, not to mention the ship in the Graveyard of the Pacific, so North Head Lighthouse was built. 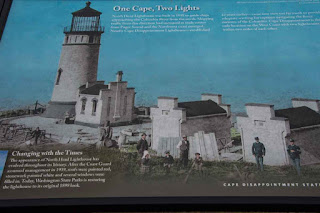 This is what she looks like today, a little worse for wear.  The problems began when they painted the outside in an attempt to waterproof the 65 foot tall building.  That caused even more problems, locking in the moisture resulting in crumbling of the brick structure.  Restoration will begin next summer to return the tower to it's full glory. 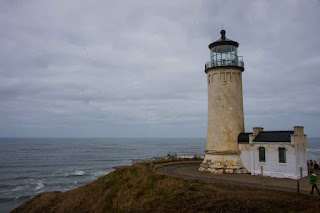 The rusted staircase has been repaired, along with many of the doors, making sure they are exact replicas.  I must say they have done an excellent job so far.  For $2.50 you can climb to the very top. 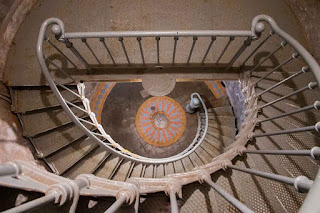 Up three stories, you come to the metal cage where the Fresnel lens used to sit.  It was removed to the Lewis and Clark Interpretive Center where it can be viewed today.  That's a good thing for tourists, because it made much more room for us to hang out at the top.  Sitting on a 135 foot cliff makes this lighthouse over 195 feet tall. 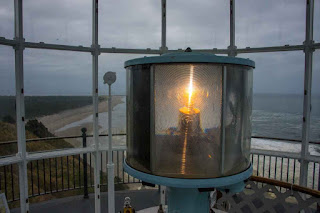 The views from the ground are just as spectacular, although a little dark on this foggy overcast day.  Just around the mountain to the left is Cape Disappointment State Park campground.  By this time, I have about 3 miles under my belt, in shoes I shouldn't wear hiking. 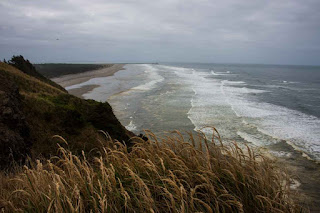 Further south on the tip of Cape Disappointment is the Lewis and Clark Interpretive Center, which I bypassed this time in favor of hiking to the lighthouse.  It's all about the pictures, so I began the steep decline along the well worn trail, thinking it was about half a mile, when I came upon a couple coming back up the hill.  They never found the lighthouse, had given up and turned back.

Just in the nick of time, someone else came up the hill who had been to the lighthouse and gave me directions.  Turns out, you must go all the way DOWN the mountain on the right to the beach shown here, then go back UP the mountain on the left.  It's VERY steep BOTH ways.

This is Dead Man Cove, probably aptly named, but no one knows for sure.  It's a beautiful spot to rest up for the trek back up the hill. 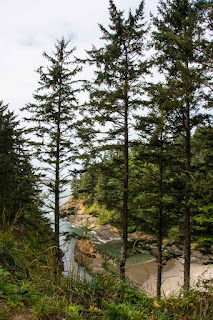 I ran into a family along the way, so figured it couldn't be too bad ... after all, I'm in shape and a runner, right??  Did I say it was steep?  It was and I didn't have my running shoes on, so my feet were complaining loudly, until I reached the top.  The view of the Columbia Bar was pretty spectacular and thankfully visible.  With over 106 days of fog every year, I got lucky!  Way off in the distance at the end of the jetty is where the big ships come through. 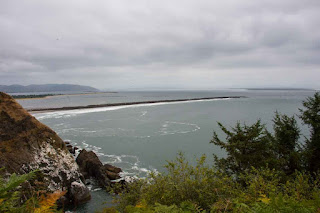 The lighthouse itself is a beauty, but you are not allowed inside, nor can you get a very good picture, since it stands on the very tip of the cape.  I'm as far back as I can get, kneeling in the bushes for this one!!  Honestly, you can get a better shot from the walkway in back of the Lewis and Clark building and save yourself the hike.  Built in 1856, this too is now in the hands of the Coast Guard.   Luckily, I survived the trek, but added a few more miles to my legs on this one. 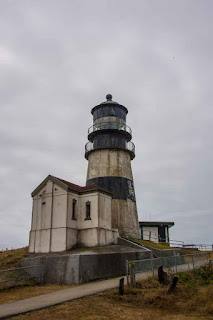 Back at the trailhead, I wandered around Fort Canby, originally built in 1863 during the Civil War.  In the early 1900's, the Army created Battery Harvey Allen and Battery O'Flying with concrete gun emplacements.  By 1918, the guns were removed and shipped overseas to be used in World War I.  Used again in World War II, by 1947 it was deactivated and all the guns were removed. 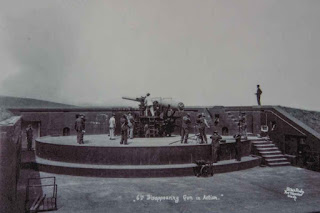 You can wander in and out of these three batteries, reading about the fort along the way. 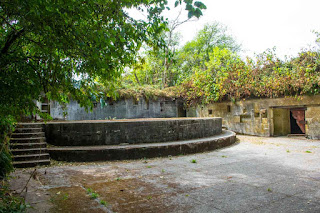 One room still has artwork from the 249th Coastal Artillery. 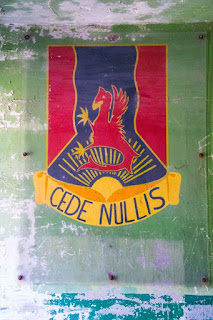 After four hours of hiking, my legs are tired and my stomach is crying, so I stopped for some five star pizza at Serious Pizza Plus, near the State Campground.  I guess you really can't believe everything you read on the internet.  I gave it one star, at best.  My large meat lovers  ... $25.00 worth ... was undercooked, soggy and pretty much devoid of the meat I was craving.  I'd pass on this one if I were you!!

Hopefully the wind picks up today at the kite festival, as I could use a short walk to loosen up my sore legs ... along with some aspirin I should be fine in ..... maybe a week or so!!