If you're ever in Eastern Oregon, I've got a place for you to visit.  An amazing place called Hot Lake Hotel, also known as Hot Lake Resort, just outside of Le Grande and next door to a very nice RV Park, Eagles Hot Lake RV Resort.

Built in 1864, this hotel got its name from the thermal spring lake on the property.  Originally a luxury resort and sanitorium (depending on whether you are reading about the history on-line or hearing it from the owner), it advertised the attributes of mineral water, drawing people from all over the world.

Native Americans were the first to arrive here, setting up camps and trading posts.  In 1864 upon the arrival of California native Samuel Newhart, a structure was built containing a post office, blacksmith, dance hall, barber shop and bath house.  When the railroad came along, construction began on the hotel.

In 1904, Dr. Phy arrived and the brick structure you see was built for use as a hospital.  With the geothermal waters readily available, it became the first commercial building ever to use geothermal heating.

Take the tour.  Yes, the owner is kind of gruff, totally opinionated and in your face, to put it nicely.  It takes that kind of personality to restore this amazing facility to what you see today.  I think it was maybe $20 each, but I'm not sure.   Surrounding the front is a solarium/garden area, still under restoration. 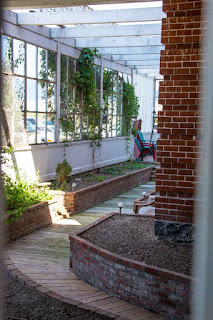 Inside you will find many artifacts, like this old Hot Lake Hotel "Under Restoration" sign.  Apparently several people owned it at one time or another, with ideas of fixing it up, but no one lasted more than two years before abandoning their efforts. 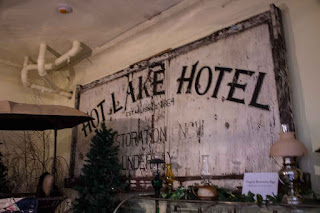 The main entry tile floors are fabulous.  Upon it's reopening in 1908, it had 105 guest rooms, a 60-bed surgical ward, a ballroom, barber shop, confectionary, drug store, news stand, commissary and state-of-the-art soaking tubs.  It became known as the town under one roof. 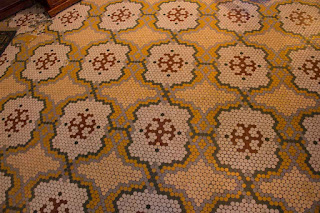 At present, the second floor has been mostly completed, with 20 suites available for your overnight enjoyment, each a composite of three or four original rooms.  It appears the locals from the surrounding area donated furnishings for each room, whereupon the hotel put a plaque on the door with their name. 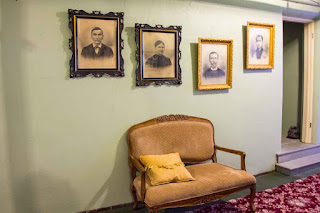 This is the cowboy room, of course.  I have to say each one is tastefully decorated, many with antiques.  I've no idea what it costs to stay here for a night or two, but I imagine it's worth it just to visit with the ghosties.  Yes, it's supposed to be haunted ... right up my alley!! 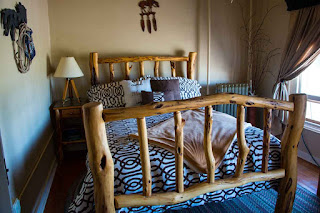 Every room has a separate bathroom including a ball and claw tub and what look to be original sinks. 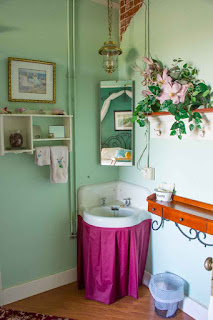 As you wander around the floors, you might look down some of the old hallways.  You'll find leftover surgical tables and items from the hospital. 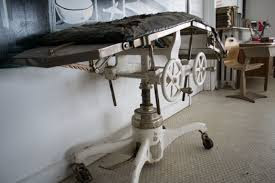 Downstairs in the lobby is this magnificent picture that takes up the entire wall.  Again, you can't enter the building without paying the tour price, but it's worth every penny.  This is a gem!! 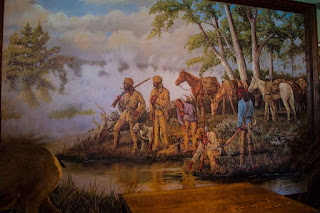 Since the owner mentioned there was lots of help from the locals, I imagine that's where most of the furnishings came from.  Stuffed animals abound!! 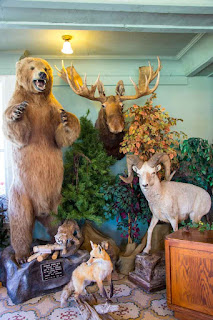 The building seems to be cut in half ... up the stairs on one side are the hotel rooms.  Up another set of stairs on the OTHER side is a magnificent museum of Indian artifacts.  No cameras or pictures are allowed .... just say'n. 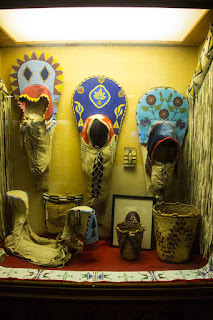 The owner stated it was the largest collection in the world ... least I think that's what she said.  By now the heat index is over the top and my brain is getting fuzzy.  There's no A.C. here, just fans.  The third floor was definitely warm, but filled to the brim with amazing artifacts!! 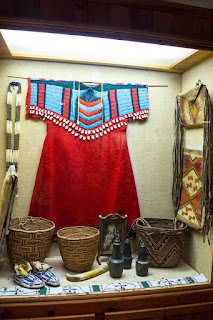 On the side opposite the Native displays was a military museum.  I've no idea where they got all this stuff, but they have more than most museums.  This alone is definitely worth the entry fee!! 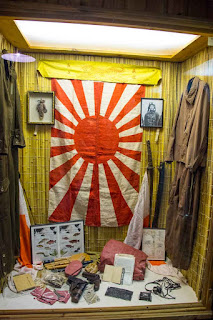 After wandering around and almost getting lost (it's that big), we headed outside for some cool relief from the heat.  Her husband is the renowned bronze sculpture artist David Manuel.  He has moved his foundry from Joseph to here, with his studio on the second floor.  There are many examples of his work in the lobby and this huge piece in the back yard. 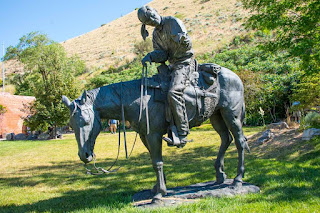 Tomorrow I'll show you the rest of the grounds, which are pretty amazing and you'll meet David in person.  Keep in mind this restoration has been a family project requiring more money and time than they really have available.  Let's just say it's a work in progress, but an amazing one that is not to be missed.  Also keep in mind it takes a certain type of person to do this ... make sure you keep your hand on your wallet!!