Guess where I'm at!!  Not exactly where I wanted to spend my morning.  Since the lasagna came out so well, I thought I might try for banana bread.  BIG mistake!!  That required chopping up the pineapple chunks that I picked up by mistake -- should have been crushed pineapple.  I'm not sure who recommended the Ninja chopping machine, but it isn't a good idea for me to work with such high tech machines. 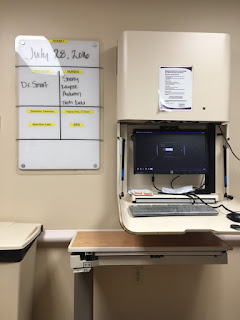 Before I even got it out of the cabinet, it ripped my finger open from one side to the other.  With blood running everywhere, I grabbed for a paper towel.  You know, those BIG ones!  After three, with no stoppage, I figured I better get myself to an Emergency Room.

Luckily the neighbors were next door and knew right where the Hospital was.  Note to self ... it would behoove me to check out the local emergency rooms everywhere I go, BEFORE something happens.  Yes, I drove myself, with my right hand high in the air.  I got lots of waves!!!

The ER took me in immediately ... too much blood and all.  Doc Chris was very nice as he unwound the paper towels, and took a look.  He then explained how he was going to shove a needle into the base of this finger and move it around until it was numb.  YIKES!!!  Yes, he said it would hurt until it went numb, then he would sew it up.  I almost passed out.  He looked at it again, spreading it apart ... YOWZA ... and said maybe glue would work instead.  I breathed a big sigh of relief. 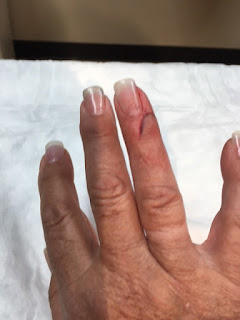 With half my finger glued from the front all around to the back, they finally got my blood pressure, which of course was through the roof!!  I could feel every single beat in my finger!! 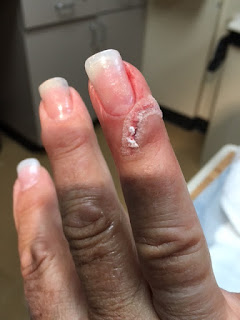 They put on a splint so I wouldn't bend my knuckle and rip out the glue when I go kite flying.  What?  You thought I wouldn't fly?  NO WAY!!!  I'll just wrap it up with lots of bandaids.  I'm pretty sure that tetanus shot I got will make up for no stitches in the pain department.

When I got home, I messaged Nurse Patty for her expert advice.  Her first question was did you cut the tendon.  What??  TENDON?  Nobody mentioned a tendon!  I can still bend it ... does that count?  Don't scare me like that!!!  Apparently the infernal machine, out for blood, missed the tendon. 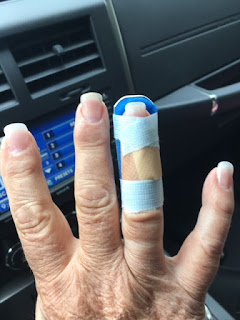 Do you have any idea how often you use that ring finger?  Good heavens!!  It's even hard to drink a cup of coffee, let alone type.  At least Miss Jessie has company in the "hurt digit" department.  She's still doing good, not even limping, so I guess it doesn't hurt too bad. 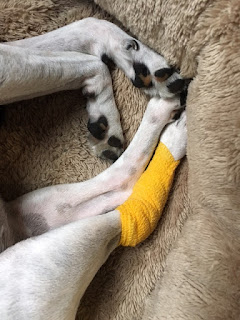 So much for cooking.  Who knew it was so dangerous??  I'm back on Lean Cuisine and Taco Bell at least for the next week, and of course I have lasagna.  Being handicapped now, I'm a little leery to try and use the oven.  It better heal up quick ... I've got another Team Kite Flying Lesson in a week and I need that ring finger for control!!!