He also catches the worm, but since I have ice cream in the freezer, all I was interested in was getting a spot to park at Seaside Thousand Trails on WiFi Row.  Mostly that's where the big rigs (with no noisy teenagers or kids) park so they can have free WiFi.  I'm going for QUIET!!

When I look up mileage and the time to get to my destination, I always add at least half an hour and usually a full hour.  Not wanting to arrive TOO early, I was resigned to wait around until 8:00 before leaving Tillamook.  That didn't last long at all as I watched the minutes tick by.  At 6:45 I was buttoned up and on the road.  I'll just drive SLOW I told myself.

Here's the funny part ... there was literally no one on the road going my direction.  I breezed right along until I found myself parked at the Thousand Trails gate at 8:08.  I apologized for the earliness of the hour.  The Ranger said he was happy to see people early.  He was bored and needed a diversion.

With only one RV having left from the North side, he said I should at least have one spot to park.  WiFi road however, had been packed for the last two weeks with no one leaving.  RATS!!!  As I parked to unhook the Jeep, I spotted an opening and RAN to put my sticker on the post.  Holy moly ... there were FOUR sites right together ... all empty.  I even had a choice of where to park!!

I guess all those little requests I made to the Big Man upstairs really worked!  I wanted to back up in one fell swoop to impress the good looking single guy sitting on his toy hauler deck next door.  YAY ... I'm IN in one try!!!  That always seems to shock me more than anyone else!!  Alas, he was not impressed!! 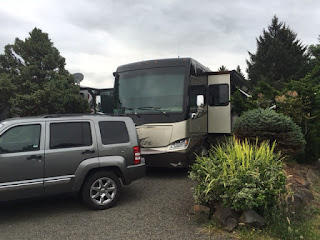 To celebrate, I made a grocery run for some coffee heath bar crunch ice cream ingredients ... my favorite!! 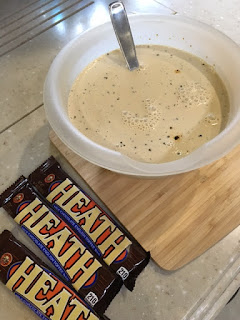 You never know what lurks in my motorhome.  I've become very good at stashing things.  Trouble is, I never remember they are there.  I'm thinking I should start up a list with locations.  I purchased this fairly rare piece of brown marble enamel last year ... maybe TWO years ago ... and just found it while scrounging for ice cream freezer containers.  It's a sign ..... time to make Mac 'n Cheese!! 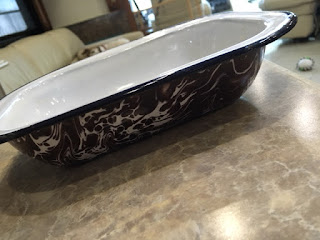 It was a perfect day ... overcast and about 55 degrees.  Perfect hiking and biking weather.  I got my bike out of the Jeep, put the front wheel on and pedaled around the park for about half an hour.  I can't wait to get it out on a trail somewhere ... or a bicycle path without a lot of traffic.  I wouldn't want to run over anyone.  The rest of the day I spent walking the dogs between the bunnies who are VERY prolific at this park.  With Jessie wanted to eat every one, that was a workout!!  I even downloaded hiking trail maps. 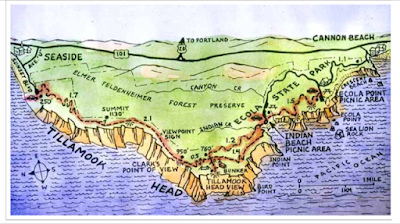 Unfortunately the winds have been zero so far, so no kite flying.  I really don't want to prove George Washington's (yay, Don caught it ... Ben Franklin's) theory on electricity either, since it's raining nicely this morning.  It's supposed to be sunny and breezy all week long.  No worries though, I love the rain and cool weather!!

I'm making a quick trip to Illwaco this morning and a long drive back to Tillamook tomorrow.  Out of the blue, my brother sends a message saying he's in Lincoln City and wants to have lunch in Tillamook.  I sure wish he had called a day earlier!!  It's okay though, I'll get to have the best clam chowder on the coast in Bay City and will have time to stop at Cannon Beach on the way back.  It's going to be a busy week!!!