My only agenda for the day was to get my kites in the air.  I set out for the beach around 9:30, but finding no evidence of wind without walking half a mile through the sand, I drove up town to the Seaside Turnaround.  At that time of day there's no cars, so parking was a slam dunk.  It was then I noticed the flag was at right angles to the pole.  That means WIND!!

I drove back to the parking lot and headed out to the beach with my Revolution kite bag full to the brim.  I had SEVEN kites to choose from, so of course I chose the WRONG one to start with.

Setting one of these up can be a challenge.  Especially when you haven't done it in about 9 months and the winds are blowing 15 mph.  That's like trying to spread a sheet on the ground in a 30 mph sandstorm.  I worked slowly, hoping I would get it right the first time.

I laughed at myself as I sent Nick Russell a message, asking if the black line went on the bottom or the top.  My hands felt like they had spent the night in the freezer.  Working all those tiny knots with my big fingers was a test in agility.

FINALLY ... I got a full sail in the air and was promptly drug halfway down the beach.  Okay then ... there's just a little too much wind for that one.  Another half hour went by while I took that kite apart and set up my Bazzer B-Pro Mid Vent.  This one didn't pull quite as hard, but it took me awhile to get back in the swing of trying not to wad up 80' of line into one big knot.  I didn't know kites could spin that fast!!!  I'm pretty sure EVERYONE could hear me yelling NO NO NO!!!! 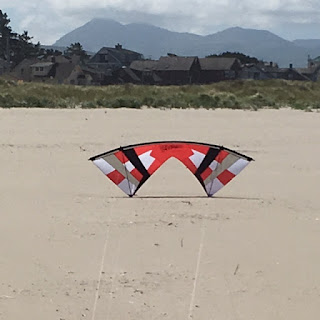 As the wind increased and my shoulders began to twist into knots, I thought it would be the perfect time to try my Shook kite with a little more venting.  Isn't she a beauty??  Never been in the air.  I laughed at myself again as I tried to switch out yet another sail, getting the spars on the wrong side of the harness.   The wind was just giving me fits.

At long last she was in the air flying high .... sparkling as the sun shone through the webbing.  SMOOTH was the first word that came to mind.  As the gusty wind increased even more, I adjusted and re-adjusted the lines.  Will I EVER get this down??

Two and a half hours later as my biceps cramped up, shortening my reach by several inches, I disassembled this beauty and put it away in my now sand-filled bag.  My eyeballs were so scratched by the wind and sand (free lasik) that I probably don't need my glasses any more.  I'm windburned from head to toe, but had a fabulous time, even if I'm not very good at it. 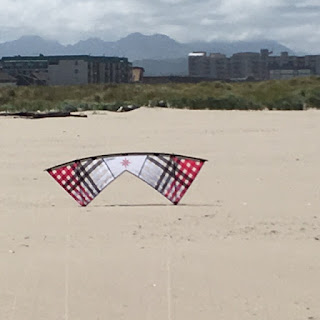 When I got back at 3:00, this guy with the big yellow swoop ... Tweety Bird is his name, complete with cartoons all around of Sylvester the cat and Tweety ... was trying to back a trailer into a space that was really too small.  I hope he's not a friend of yours.  I shook my head when I saw Henry's Man Cave over the trailer door which held a small car AND a motorcycle.

An hour later having trimmed the tree with his rear view mirror, he still couldn't get the trailer in the space.  Why oh WHY would you have a 42' rig with a 30' trailer and try to camp in Thousand Trails?  With the trailer finally in, he unhooked and pulled forward, to park in the middle of the road blocking traffic for another half hour (with the engine still running) until he finally figured out how to get them SIDE BY SIDE in a space only big enough for one.  His slides reach clear into the neighbor's space.

It was interesting to note there was no Mrs. in this rig that I could see, or maybe she was hiding in the closet!!  Almost two hours after arriving, he finally turned off the engine and placed his huge stuffed tweety bird right up front.  No, I won't be knocking on his door to see if he really is single. 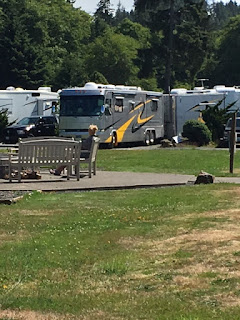 To complete my day, Baby Boy got a bath, as did Jessie.  Neither were very happy as I mopped up water from one end of the rig to the other.  Speaking of which, a nice hot bath would do wonders for my shoulders, getting tighter by the minute. 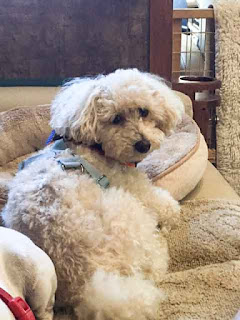 I do want to thank Carol K and her husband Dave for all the information on the Safari park in Illwaco.  It's cool to meet nice RV people on the road who are so willing to help.  If anyone else is interested, let me know and I'll put you in touch!!

I've no idea what's on the schedule for today ... maybe a trip to the Outlets ... maybe the kite store.  It's overcast and looking like more rain, so indoor activities sound good.  Even sitting in the rig listening to the rain is nice when you're on the Oregon Coast!!!