Here I am parked at Thousand Trails in Bend.  The picture is rather deceiving.  It looks nice, right?  I'm in the trees, so it's shady, but there's no satellite reception.  Judge Judy is still running on local TV, as is Divorce Court, Jerry Springer, Jeopardy and that Vanna White show.  I'm on the road to the dump station, so traffic is constant, showering me with powder-like dust and dirt, not to mention the lovely wafting smells on the breeze.  It's all good however .... there's no close neighbors! 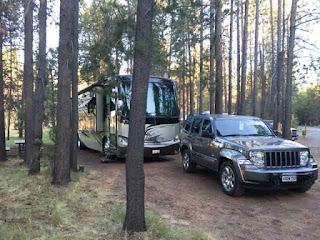 I spent the entire first day driving around town.  It's actually about 12 miles, interspersed with road repairs, making the 12 minute drive last 25.  That's okay too.  It gave me plenty of time to figure out where the heck I was going.

First stop, a quilt store of course.  I have to say the stores up here are awesome.  Although I originally thought they just gave me that 15% discount because they liked me, come to find out it was because of the most popular Quilt Show on the West Coast in Sisters Oregon this Saturday.  This was my first purchase, a great red, white and blue number with pinwheels, featuring a FREE pattern. 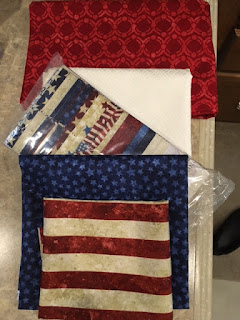 Since there is no sales tax in Oregon, my discount rounded up to about 23%, making it possible to purchase ANOTHER quilt pattern and material for my nephews love of fly fishing.  I'm really hoping I get it done by Christmas, because I don't think he knows how to sew. 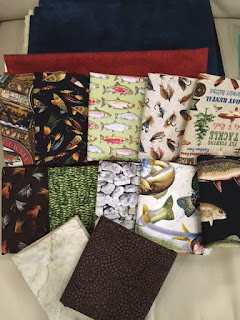 By then I was starving, and what should magically appear but a Taco Bell.  I see your faces cringe in disgust, but there are a couple of good "cheap" things on their menu without the normal calories.  To make the morning even better, there was a car wash next door having a sale.  How often do you see that?  $6.00 later my Jeep was clean, although almost run over by the guy trying to squeeze his truck and HUGE trailer with backhoe, through a six foot wide hole. Thank goodness he stopped so I could pull out of the way.  On my way to JC Penneys, who advertised a makeup section that didn't exist, I stopped in at Macys, where I spotted an OPEN sign on two really old buildings.  Come to find out, it was the Pomegranate Home and Garden.  The two story house, ice building and bunk house were from the first cattle ranch in Bend.  The owners have preserved the old buildings along with its history.  I applaud them for that!!

Inside, you will find interesting things like this wooden olive wood bowl for dips or crackers, and these cute little mice name tags for your cheese presentations.  I really don't need the name tags, since I'm sure you are all familiar with cheddar cheese (the only one I might serve) but they are a conversation starter.  There were lots of french soaps and hand creams, and a set of stairs going to the second floor that rivaled our old ranch house. 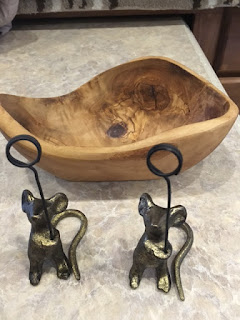 Back at the rig, with my packages safely stowed, a friend posted this photo on Facebook.  I think I need this.  I'll apply the decal and scrape off everything but the mom and dog.  Maybe I'll get lucky. 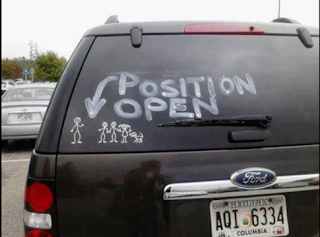 I learned too late that friends Donna Huffer and Bob Parker have been parked in the overflow section here, just down the street.  Unfortunately, I'm leaving at 6 am, although I'm sure that breaks some rule about quiet time.  It's a long 5 hour drive going all of 139 miles, so you can imagine what the road looks like.  Hopefully by tomorrow morning I'll be ensconced in Thousand Trails near Newport.

The next quick move will be to Seaside, where I'm praying for a good site on the North side.  If everyone says just one good word for me, I'm SURE I'll find something suitable.  Thank you in advance!!!

As I type, it's raining ..... and raining, although predicted to quit shortly.  There's a big cold front coming in over the weekend, so I need to get while the getting is good!!

By the way, my $1.5 million dollar transaction was just approved by the UN.  If I just respond to the email, they will make sure the money is in my bank by noon.  I really won't be needing it however, since Charles F. Feeney just notified me I won $1.9 million.  All he wants to know is my bank account number so it can be deposited immediately!   Now I can afford to hire a Chauffeur!!!