There was a lot to look forward to yesterday morning, and thankfully it didn't include pedaling!!  Amazingly, I wasn't the least bit sore, which I owe totally to the recovery drink Powerade.  Up very early, I baked five dozen biscuits for a biscuit and gravy breakfast for the troops here at our rally.  That Breville oven is worth every penny!!

Immediately after, we headed off to Elgin where we all loaded on to the dining car of the Eagle Cap Excursion Train, where Veterans rode for a MUCH discounted price.  For the rest of us, it wasn't exactly inexpensive ... $66 for me ... but WELL worth it.  This train ride is a MUST. 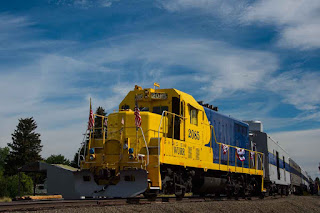 We snaked up the canyon towards the little town of Vincent with me hanging out the door between cars so I could take pictures. 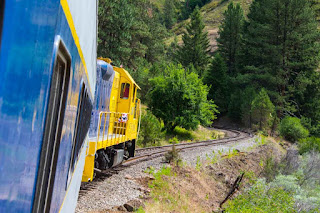 The scenery was spectacular.  Take a coat however ... the cars have the best air conditioning I've ever been around.  Our overcast day cut quite a few degrees off the heat factor, so some were chilly.   The volunteers working the train and selling snacks brought quilts and blankets to anyone who needed it. 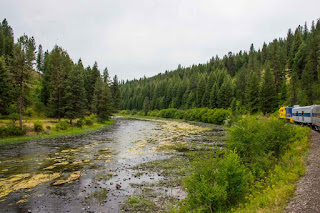 We stopped at the confluence of the Wallowa and La Ronde rivers to watch for rafters coming down the way.  The conductor said it would give us a chance to use a big word ... confluence. 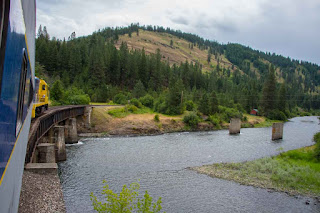 There were several boats with flags, this one with a big peace sign on it.  It looked like many rafts this size were packing gear for a campout, following by all the campers in kayaks.  This guide was trying to catch dinner. 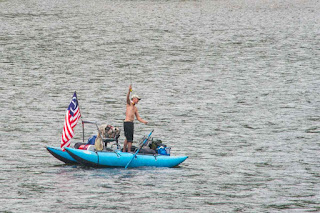 You never know what you'll see on a train, but since it's the fourth of July, I couldn't argue with these socks. 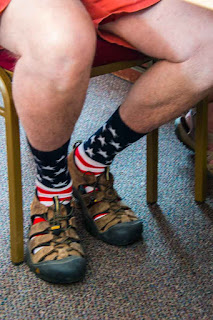 We saw TWO bald eagles, although VERY far away.  We even saw a golden eagle, but he was flying away from us and the picture was just too blurry. 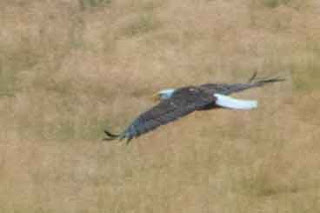 GUESS WHERE I'M GOING!!  Still very thankful I wasn't pedaling, I asked the Conductor if I might be able to go up to the engine for some pictures.  When he said yes, I hollered at Dan Chance who was behind me in a flash, as we climbed up on to the outside walkway. 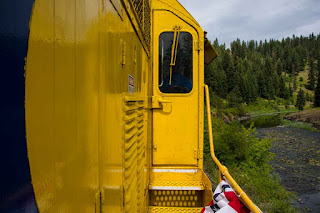 Here's the first view out the front window.  I'm in seventh heaven.  Not the same as riding in the cab of a steam engine, but this is just as exciting.  We chugged up the tracks about 10 mph while the Engineer talked to us. 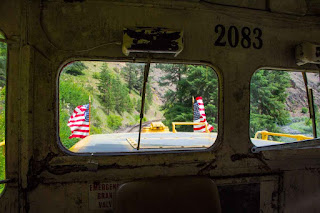 Here's proof I was there.  Can you tell I'm happy??  These two diesels ... one on the front and one on the back, were built in 1954.  They are GP-type diesel-electric WURR locomotives.  Although rebuilt, they are still going strong. 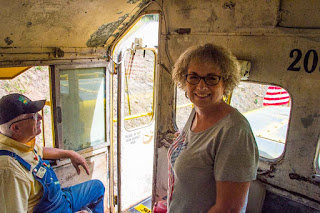 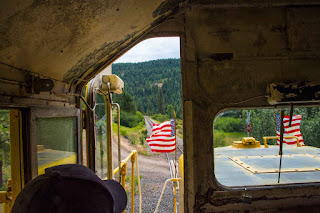 We stayed as long as possible inside, but when two more people came up, we finally had to say our goodbyes to the Engineer. 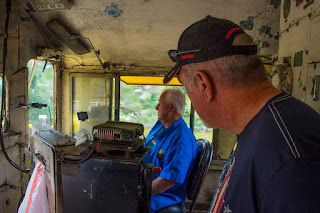 That didn't mean we had to leave the locomotive however ... we hung out on the walkway, me hanging on to my camera and the rail for dear life. 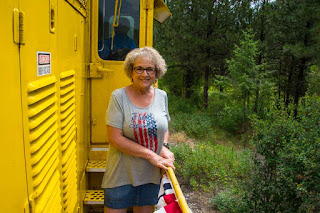 Finally we had to give it up and go back inside.  A box lunch is provided, included in the price, and it was delicious.  A HUGE ham and cheese sandwich, delicious homemade potato salad, grapes and a mighty tasty cupcake, along with a soda of your choice. 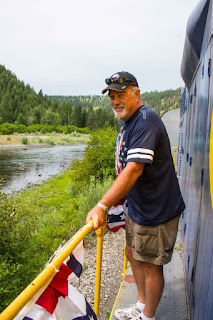 Once I got my locomotive fix and my stomach full, I headed back to the between-car window to take more pictures.  As we swung around a corner of the river, what should appear but pelicans.  Hey, aren't they supposed to be by the ocean??   It looked like there were about 50 or so, just hanging out in the river.  How cool is that? 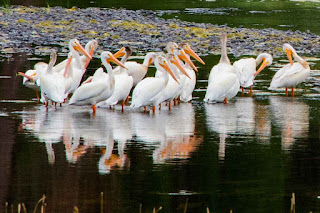 We didn't see any deer along the way, but upon our return, there was a doe crossing the tracks in front of us.  Apparently they prefer to hang out in town where there is more tasty lawns to snack on.

Happy hour was upon us before I knew it, so I quickly made orange chicken for the troops.  Once outside the door on my way to the picnic area, I stepped in a hole and promptly dropped the whole thing in the grass ... upside down.  Heavens to Betsy!!!  I almost cried ... that orange chicken is really good, but as happens to me many times, it went in the trash.

Today we're off to the Oregon Trail Interpretive Museum .. another MUST SEE in Eastern Oregon.