Even though I think I'm on the West Coast of Oregon, I'm pretty sure I hiked the Continental Divide yesterday.  At the very least, it sure FELT like it!!  Here's the route I took at Tillamook Head, beginning in Ecola State Park where there is a $5 per vehicle charge.  DO NOT take your RV, no matter how small, into this park.  The road is very narrow with overhanging trees.  Just ask the guy who tried it and left his air conditioner on the road.  Seriously, how could you miss that big sign that said NO TRAILERS OR RV'S? 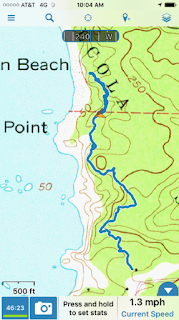 Park in the lot where you can see the ocean, but don't walk closer.  You'll thank me that you didn't take those few extra steps.  Instead, head to the North on this beautiful trail that lulls you into thinking it's going to be an easy hike. 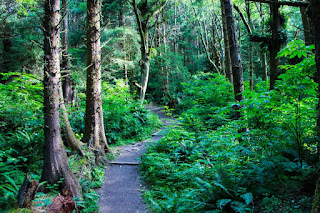 Fairy like, right?  This is where the fairies fool you big time!!  This is the start of the first hill, not 50 yards from the beginning of the trail.  From here on, you are either going straight up or straight down. 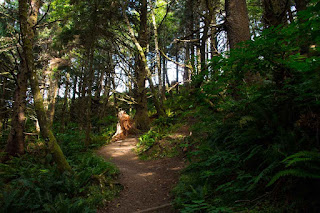 I have to admit, the views were TOTALLY work the trek.  There are three great spots on this trail to enjoy the ocean, one of which is the view Lewis and Clark had.  Take food and water with you.  You never know when those salt cramps will hit your left foot because you're used to sandals, not hiking boots.  Also watch out for those sections of the edge that are eroding away ... it's a LONG fall to the bottom. 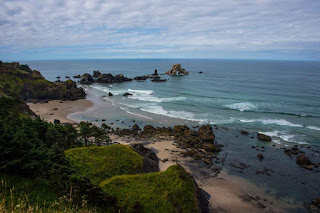 The rock farthest out has a big hole in the middle and the water is as clear as a bell.  It's very cool and breezy, but I'm sure my temperature has gone up ten degrees.  I checked my latest App (the map above came from there, courtesy of Patty and John Painter) to see the elevation changes and how far I had gone.  It's satellite driven, so you don't need a phone signal. 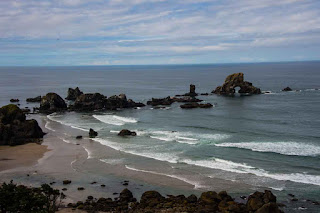 It said the elevation change at that point was 500 feet.  I made that change three more times before reaching the end.  If you're a hiker, this is a spectacular trail.  If you're not, you may not like the cliffside hang-on-by-your-toes part or the muddy clay you have to slide down.  About half way, it appears the Forest Service gave up on maintaining the trail.  The views definitely make it worth the sweat and tears to get there however. 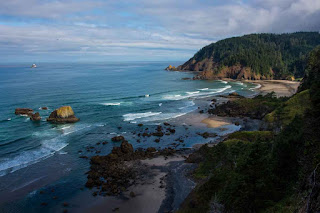 Terrible Tilly was my main objective, but by the time I got there, I was exhausted and soaking wet with sweat.  Don't bother taking a coat, because you'll have it off in the first ten minutes, wishing you didn't have to carry it the entire way.

Tillamook Rock lighthouse was built in 1881.  You can barely see her in the above picture, way up in the top left corner.  That made getting lighthouse keepers and supplies to her a pretty dangerous endeavor. 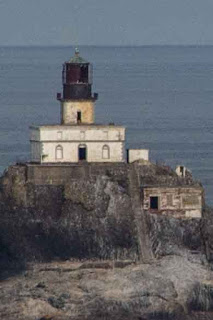 Over the years, the rock has eroded and the lens was shattered.  She was decommissioned in 1957, whereupon a private company bought her for a columbarium.  They stashed quite a few cremated remains on the island before Oregon outlawed the practice and shut them down. 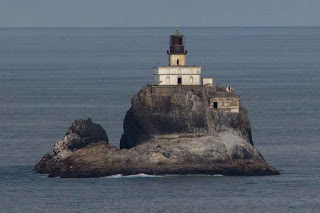 There's cool stuff to see all along the trail when you are forced to stop for lack of air.  Mushrooms, those big yellow slugs and cougars, although I didn't see any of the kitties.  I'm sure my gasping for air kept them at bay. 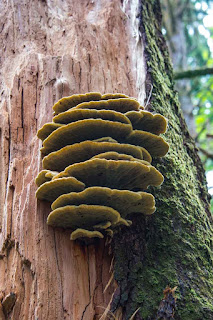 When you finally reach Indian Beach, only 1-1/2 miles later, you'll be happy to know you have to walk a little further to reach the trail down.  Those specks below are actually people who drove to the upper parking lot and walked straight down to the sand, however they missed the three amazing views from the trail I just hiked. 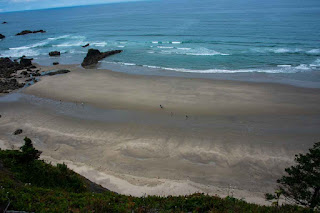 On the way back, I caught my second wind, slowly walked the uphill parts and ran the downhill sections, just to see if I could.  The old trail runner in me couldn't help herself.  This is Cannon Beach, the parking lot view. 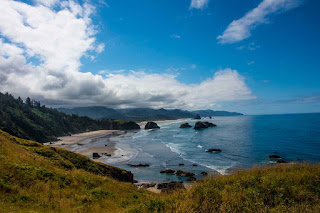 If you keep your ears open, you'll hear these little beauties before you see them.  They have a beautiful song they sing when talking to the ladies in the trees.  One more thing, take your bug spray. I have thee new bites to contend with. 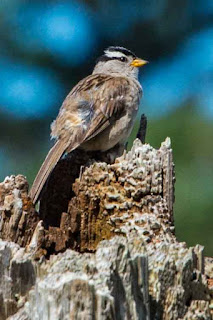 I rested up a bit upon my return to the rig, but Joanna's kite flying advice kept running through my head and my hands wouldn't stay still.  So just because I love to inflict more pain on myself, I grabbed my kites and went to the beach, where I walked a quarter mile through the soft sand until I found an uninhabited spot.

With not much wind, I pulled out a full sail (no vents) and went to flying.  Okay, not so much flying as crashing.  There wasn't enough wind to even keep the lines taut.  With steady consistent wind, it's a breeze.  I was dealing with something like the wind that was coming out of my mouth on that hike.  Lots one second, nothing the next.  I finally gave up.  Not completely though, I'll keep trying.  Gee, I remember the wind being SO much better last year!!

To keep my pain and suffering at a peak, I think I'll ride my bike along the Promenade today, maybe stop in for another pastrami sandwich and a bottle of pain reliever!!