I'm having a T-Shirt made for this one!!!  Having received the OK from trusted friend and mentor Dan Chance about traveling this highway from Bend to Newport, I left at 6:00 am for the 5 hour drive (according to the internet) going only 139 miles.  That should have been my first clue.  Dan's words of wisdom were "If you can drive the road from Enterprise Oregon to Clarkson/Lewiston, you can drive anywhere"!!!  I believed him, silly me!

I took off under stormy skies, hoping to beat the rain and cold weather predicted for last night.  Terribly hesitant, since the only thing the local news was talking about was the predicted SNOW, I drove off into the fog and rain after fueling up, just to be sure I had a full tank going over the mountain. 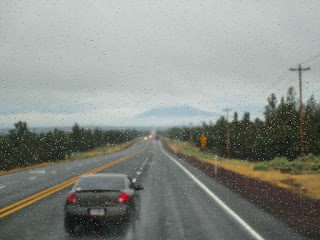 I kept a close watch on the temperature ... if it starts to snow, I'm parking this puppy in the middle of the road until it's gone!! 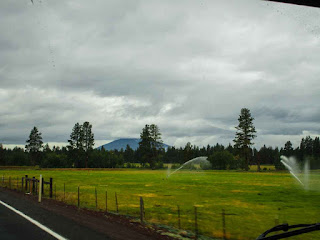 Today is the big quilt show in Sisters where they hang everything out on huge laundry lines for people to view.  I doubt that's happening with all the rain.  People come from as far away as Texas and beyond, just to see the quilts and buy fabric here.  And you thought "I" was the crazy one!! 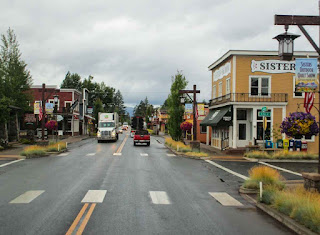 I got a little nervous as I headed up the hill, but the road was still good and there was traffic, at least coming the other direction. 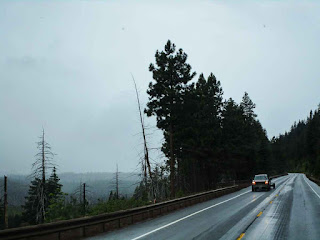 Pretty soon my shoulders inched up around my ears as the road got narrower.  See that space to the right of the white line?  It disappeared.  Shoot, even the white line disappeared!!  In no time, as I looked back, I had the left wheels covering the yellow line and I couldn't see anything but dirt on the right. 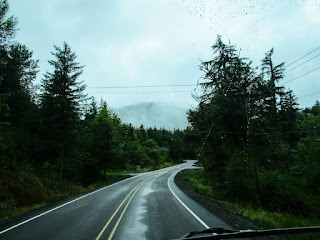 There are no pictures of that entire section.  I couldn't pry my hands from the steering wheel long enough to grab the camera.  To make it even MORE interesting, there were three big sections where the mountain had slide off down into the canyon.  They tried to make repairs, but must have used shovels instead of heavy equipment.  The single lane road was barely wide enough for a car, let along a motorhome and so rough, I had to almost come to a stop.  Good GRIEF!!!

I aged another 3 years in an hour and am completely gray haired now.  I doubt my shoulders will ever return to their normal position, but I SURVIVED!!

I can't even tell you what town this is, I was so happy to get down the mountain safely, I didn't pay any attention.  It looked like the weather would clear up, but that was not the case. 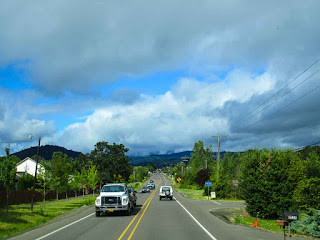 I finally pulled into Newport and crossed my favorite bridge before locating a spot at Thousand Trails in South Beach.  I finally breathed a BIG sigh of relief! 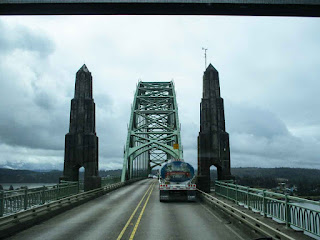 FYI the internet service here is still not very good.  The rumors of a new tower being placed close by are apparently not true.  My Verizon Jetpack with only one bar this morning, works okay but is still pretty slow loading pictures. 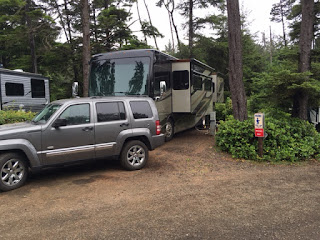 My first stop was of course the South Beach Fish Market.  After that drive, I'm sure I burned off enough calories to make up for their delicious halibut and chips.  Sorry, I ate half the halibut before remembering to take a picture. 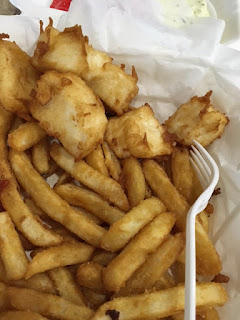 To ensure that my shoulders return to their normal position (not permanently attached to my ears) I baked a huge batch of brownies!!  I could have eaten the entire bowl, but I only had one!!  Okay, TWO! 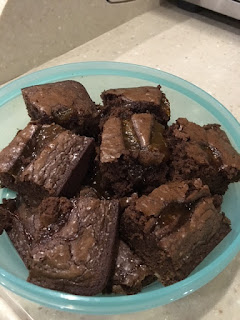 I've now taken on the moniker "Kamikaze Driver", although I'm sure my life has been shortened by a year or two.  There is a weird satisfaction in that Dan was right after all and I DID IT!!  I just don't want to do it again!!  There's a less direct route from Bend to Newport on better roads, but if you feel adventurous, take Highway 20 ... we'll start a T-shirt club!!