This is one of those little mystery spots that hardly anyone ever hears about, let alone visits.  It was the end of the road for the Chinese who came here looking for riches in gold, but ended up as laborers, cooks and laundrymen.  It was a little too far away to bury my orange chicken disaster. In 1883 on the Powder River, a Joss house was built, surrounded by gardens.  The Chinese lived there  frugally and sent all their money home to China.  When the gold ran out, they were used as labor to built rock walls which still stand to this day.  Highly discriminated against when it came to voting and jury duty, they were considered expendable. 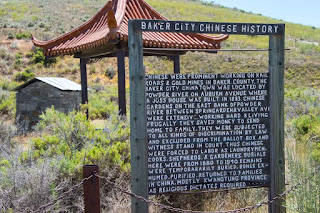 Many were buried here beginning in 1880 and continuing to 1940.  This little building was used to burn incense and papers to keep the bad spirits busy while the good spirits ascended to heaven.  The papers were filled with a million tiny holes the bad spirits had to pass through.  Each spring, the families returned to burn more papers and incense, according to their lunar charts. 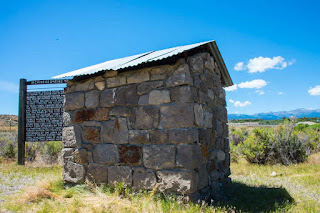 The most interesting part is people were only buried here temporarily, until all that was left was their bones.  Purified, they were then mailed home to China for burial. 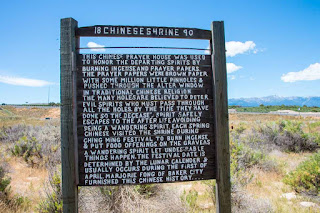 The sign says there are 67 graves here, mostly holes left from digging up the bodies.  It is believed there are still three graves that contain bodies. 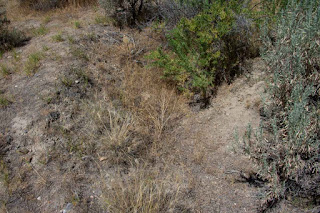 This is Lee Chue one of two headstones in the entire cemetery.  Born in 1880 and buried here in 1938, he keeps watch over the empty graves. 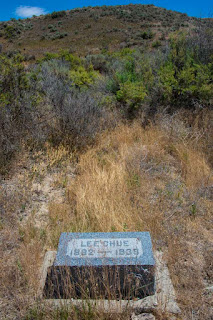 There are lots of native flowers here, including this beautiful seed pod. 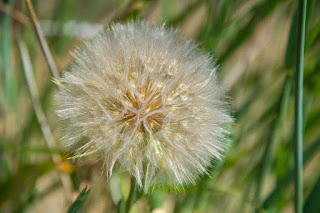 Thistle abounds and is currently in bloom.  Only sagebrush and greasewood adorn the graves. 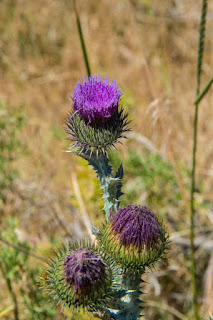 If you stop in here, be aware of snakes and critters.  You can't miss it ..... it's right across the street from the windmill.  Windmill??  Yes, although it's missing one blade at the moment.  The Bootsma family built it as part of their 17 acre commercial project on the corner, including the truck stop.  They say it works, but it doesn't.  It IS a good draw for someone driving down the highway needing fuel.  That's how I ran into my nephew, out here in the middle of nowhere!! 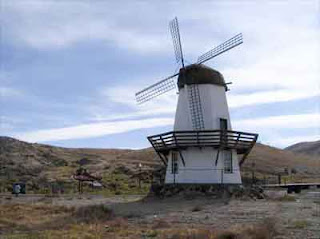 I have lots more pictures and stories, but I'm moving on down the road ... West to be exact, heading to the nice cool, breezy coast of Oregon!!

Posted by Nancy Kissack at 5:00 AM