Short and sweet ... we flew as an eight man team and I'm totally BEAT and extra crispy!!

After an hour's drive, I arrived at the designated meeting point in Long Beach, with of course no sleep and a sick stomach from nerves.  When I saw John in the parking lot, he reassured me there was one other gal who had basically NO experience, so I didn't feel quite so bad.

What DID make me feel bad was the two tiny kids I saw buy their first kite just last year.  They were also in the group (6 and 8 yrs old), flying almost as good as John.  We all set up our kites rather far apart and he went from kite to kite, checking setups and flying each one before tweeking it to perfection.  He then gave us some drills to do as he worked on everyone else's kites. 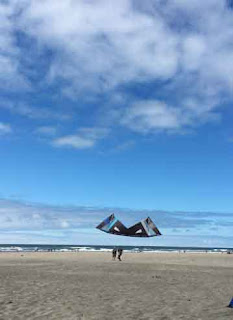 Sorry, there's not much in the way of pictures.  There just wasn't time.  I flew up and then upside down, turned and landed until I was doing much better.  Our first break wasn't a break at all, but an encyclopedia of information about kites, how they are made and how they fly.  GREAT info!! 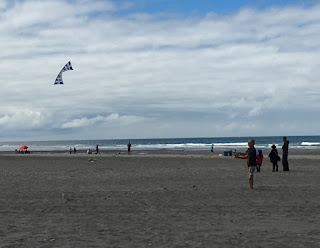 From there, we all lined up in a row about 10 feet apart with John on the end.  He would do a maneuver, then land.  Next in line did the same thing, and on down the line.  Pretty soon, odd numbers did the maneuver while even numbers kept their kites planted in the sand.

In no time, we were threading the needle with our kites coming down while the two next to us went up.  Next maneuver was making a box with four kites and landing, then a diamond and finally a circle.  Once in a circle, we would burst OUT (making it much bigger), then fly backwards to the inside, then into a long line and finally landing.

You just can't imagine how cool that was unless you were flying.  I was in total shock that I was able to do everything ... maybe not perfectly, but at least I didn't crash into anyone.

Lunch was a really quick ten minute break and in no time, we were all back on the lines.  Basically, with the exception of maybe 50 minutes, we flew our kites from 9:00 to 4:30.  It was then I noticed my feet had become crispy critters.  I had on long pants, a long sleeve shirt and one of my big cowboy hats .... who thought about their feet?????  Obviously not me ...... 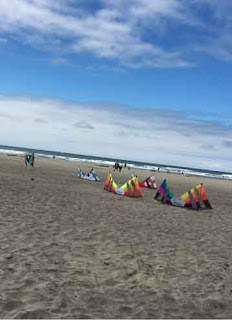 I not only took Advil when I got home, but Advil PM to sleep and slathered my feet in Aloe.  Bedtime was 8:30!!

So I'm off again early this morning, a little worse for wear, in order to get a parking spot for another day of team flying.  Hopefully it goes as good as the first day, cuz it was a real KICK IN THE PANTS!!!