No Wind But Lots Of Laughs!!

Well for heaven's sake!!  What's a girl to do when there's no wind for her kite?  That's easy .... GO SHOPPING!!  Again arriving early for that ever popular parking space, I walked through several of the tourist hot spots.  I really didn't need any T-shirts or shark jerky, and believe it or not, I passed every single candy shop on the drag.

What I DIDN'T miss was Tsunami Sandwich Company just half a block before the turnaround on the left hand side.  If you're in this part of the country, be sure and stop in. 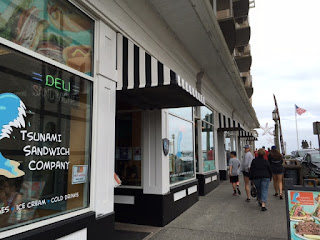 My sandwich of choice is my all time favorite Tsunami Pastrami.  A full half pound of delicious paper thin sliced juicy pastrami on marble rye (or any bread you want) with a mustard horseradish sauce.  Don't worry, it's very mild ... or you can switch it out.

It's so HUGE that I can barely get my mouth around it for a bite.  I also can only eat half .... leaving half for breakfast!!  Yup ... stuffed to the gills!! 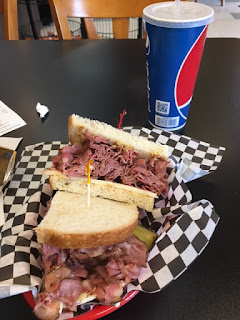 But that didn't keep me from hitting the ice cream counter on the right.  Rocky Road was a perfect finish to a GREAT meal!!  Next up ... hit some more shops and walk off all those calories!!  Like that's going to really work!! 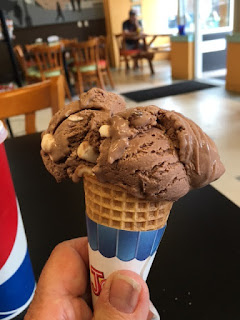 A little history ... in 1806, members of the Lewis and Clark expedition built a salt cairn here in Seaside and later, lumber and railroad barons built mansions.  Then in 1912, Alexander Gilbert, a real estate developer, was elected Mayor and donated the land for the promenade.  It's been all about tourism ever since.

This is the vehicle turnaround at the end of Broadway, with the promenade to the left and right along the beach.  It's mile and a half length is perfect for a stroll or bike ride. 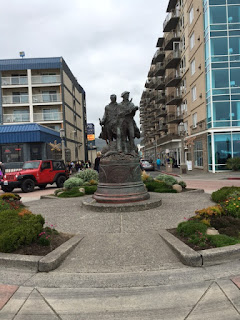 In one of the bigger buildings is the Carousel ... a huge merry-go-round that you and your grandkids can ride (or buy ... it's for sale).  Right next to the carousel is Caffe Latte, owned by Julie Jesse (on the left).  Please stop in and say hello.  She's good friends of the Bike Newport bicycle shop where I bought my new ride. 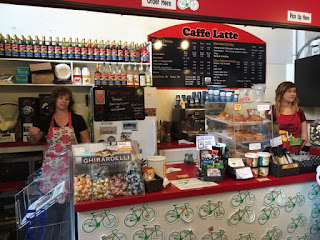 Julie rides the Arthritis Bike Classic every year in support of the Arthritis Foundation.  She and her husband raise over $6,000 for this cause by riding for SIX days from Portland to Brookings.  All along the way, Bike Newport not only rides, but keeps everyone's bikes going.  I don't see Walmart or Target doing that .... so please help support these family owned businesses when you're in town.  If you've a mind, you can even go to ArthritisBikeClassicOregon.com and donate to Julie Jesse on her webpage. 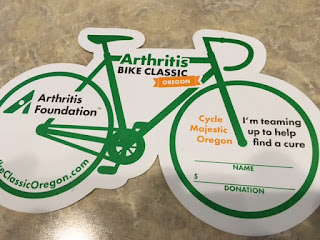 A little further down the street, what should I find but a SHARK RIDE.  Kind of like a Bull Ride, no one stayed on for more than 5 or 6 seconds before crashing into the cushy swimming pool.  This was good for 15 minutes of laugher!!  They even have bumper car rides here!!  How fun is THAT? 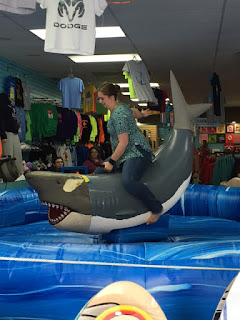 There's something for everyone ... Ter Har's at the Beach is a clothing store carrying the Fresh Produce brand of women's clothing, along with walls of T-shirts for the men.  Don't think you're going to get a deal here ... it's a she-she shop at the beach ... and OH so expensive!!  There's no sales tax, but that doesn't help much.  My wallet shed a few tears along with a handful of 20 dollar bills. 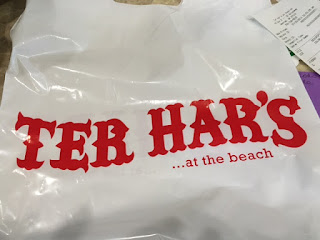 For my friend Dan Chance, the railroad on Broadway is finally gone.  There used to be a little train giving kids and adults rides around the figure eight track.  Last time we were here, the track remained, as did the little building.  It's all gone now .... sad to see another one bite the dust. 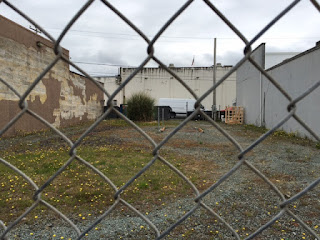 Next up was the Antique Mall, also on Broadway, the busiest street in Seaside.  As I drove along the street, I saw a parking spot, but passed it before I could stop.  Around the block I went again, as quickly as possible.  On the second pass, I saw an even closer spot, which unfortunately turned out to be a fire hydrant.  DRAT!!!

On the THIRD trip around the block I started laughing.  I really didn't want to make that trip down Broadway again because all the same cars were STILL waiting for the green light, and I was SURE they would wonder why that lady keeps driving around the block!!!  To make it even worse, I had to parallel park in front of everyone!!!  All for nothing, since I didn't purchase a single thing in the Antique Mall.

Since it was Friday, all the weekenders showed up, squeezing one rig and three cars into too small spaces.  Kids galore flooded the grounds with bikes and trikes, sadly left out in this morning's rain.  Four of them played volleyball, screaming and yelling until past 10:00.  Lucky for me, I'm just far enough away my earplugs work ... not so for Tweety Bird, he's front and center and sandwiched in between rigs with five and six kids.  I feel rather sorry for him ... it's going to be a long weekend!!

Today I'm off to the Illwaco Farmers Market at the harbor.  I'm going to stock up on veggies to counteract all that ice cream I've been eating!!  I might even stop in Astoria at the quilt store!!