I know everyone isn't into kites ... but hand made kites from the Gold Coast of Australia are another story indeed!!  As far as Revolution kites are concerned, there are three big names.  John Barresi, 25 time World Champ, Eliot Shook, artist, designer, kite maker and Barry (Bazzer) Poulter, artist, designer and kite maker.  These guys have taken Revolution Quad (four line) sport kites to a new level.

At this point in time, there will be no more B-Pro Series Revolution kites (a joint venture between Bazzer, Barresi and Revolution) ... up till now, the standard in Revolution Kite flying.  The patent has expired, as have the contracts that produced such works of art, that when in the right hands, can do amazing tricks in the sky and on the ground.  Luckily, I have two B-Pro series kites.

Enter the Phoenix Pro ... the next invention in kiting ... from Bazzer, who has since moved to Australia and married Jayne.  I ordered two of these beauties, a full sail (no vents) and a vented sail (two strips of mesh, making it possible to fly in stronger winds).  Everyone waited patiently for their arrival except me. 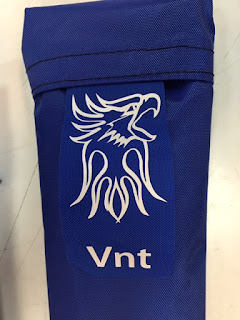 Thus began the saga of the kites.  They were mailed in Australia on July 21.  On the 23rd, they arrived in Los Angeles.  True to the U. S. Post Office's amazing service, they sat there for 5 days.  I called every phone number I could find, to no avail.

Although I was going to have them mailed to me at the local UPS office, Jayne suggested they go to the Northwest Winds Kite Store in town.  No problem, except everything I received from the Post Office had the UPS address.  At long last I saw they made it to Seaside and were out for delivery.  What I SHOULD have done was take a closer look at the mailing label Jayne sent to me.  It said 10 Roosevelt Street.  But wait .... NOT the UPS address and the KITE STORE address is 19 Roosevelt.

About that time, I received an "undeliverable" text message.  I dashed out the door, jumped in the car and RACED to the Post Office.  Freaking out would be a good description.  Worst case, the kites would be back at the station at the end of the day.  I camped in their parking lot. 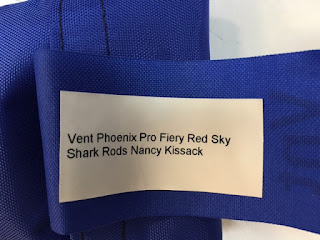 SURPRISE!!!  The nice Postman was familiar with the kite store, and dropped the kites off in spite of the wrong address.  FINALLY I got my hot little hands on these beauties.  Too bad I have a sliced finger and can't fly them!!!  No worries, so far anyway.  I'm down to bandaids, having caught the glue in my hair, resulting in a rather loud and hurtful ripping sound, followed by ... well I'm sure you can imagine. 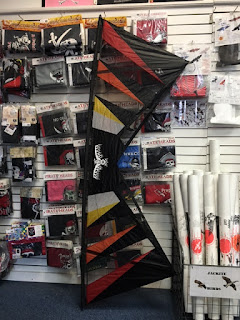 I stuck around the rig again, keeping a watchful eye on Jessie and contemplating my lovely foot tan until I couldn't stand it any more.  I actually drove all the way to the drug store to get another box of bandaids.  Sad, but true. 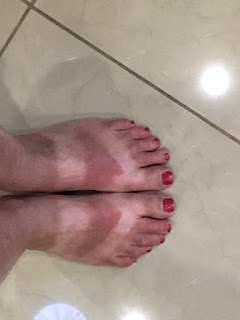 At this point, I have to mention there are a couple of DO NOTS in Seaside.  Really, it's just common sense, but that seems to be in short supply.  The first, and most important for RV travelers ...

DO NOT try to drive down Broadway Street (or any street for that matter) West towards the ocean.  The streets are barely wide enough for two cars without parking on both sides, which there is.  You will NOT fit and you'll make everyone else on that street really mad!!  Park somewhere on Hwy 101 and walk.

DO NOT go in the drug store with a brand spanking new baby (and I mean new) to buy baby bottles, formula and water so you can SIT in line at the checkout stand and prepare said bottle for baby on the FILTHY FLOOR with COLD WATER!!!  Yes, giving that bottle to the baby did ease it's crying.  I sincerely hope it survives the hotbed of germs it just ingested, not to mention anything that might have been in that unsterilized bottle.  SHEESH!!!!!

DO NOT just sit at those green lights.  Green is for GO!!  If the guy coming at you has his turn signal on .... GO GO GO.  Don't sit and wait for every single car to disappear before you start your turn.  I realize you don't care about the twenty cars behind you, but PLEASE use some common sense.

Okay, that about does it for Seaside.  Stay tuned for more DO NOTS from Long Beach!!