Just Hanging Out With The Bunnies

Remember that cute little succulent I've been carrying around for almost two years?  I picked it up in Tucson and babied it until it finally bloomed.  Then it got a little overheated and the tips died, but Miss Patty the Gardener said to just wait ... it would return. 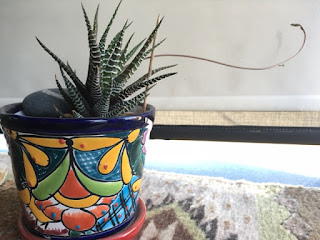 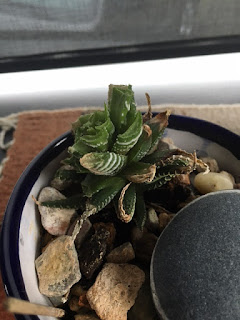 Those little stinkers!!!  They only come out in the early mornings, so it's hard to get a good picture. When you have two dogs who have tied your legs with their leashes, trying to EAT the bunnies, while I try to focus my iPhone and press the button with one hand was difficult at best.  I'm pretty sure the little plant won't survive THIS!!!  At least they didn't like the cactus or the bonsai!! 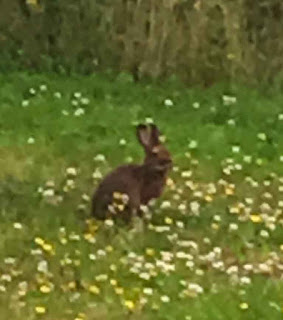 Since I was out of all things sweet, I headed off to Pacific Way Bakery in Gearhart, just down the street.  You can't miss it ... it's the one with all the people standing out front waiting to get in the door.  Go early, because by 7:30 when I got there, most of the GOOD goodies were gone. 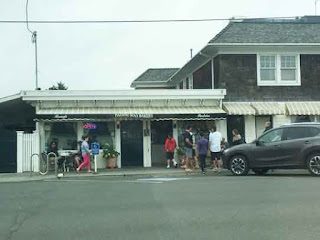 They still had some excellent sweets left however.  That's a peach filled puff pastry and yes ... a chocolate croissant!!!  I ate the whole thing!  Not both, just the croissant, which as you can see, is half the size of a large paper plate!! 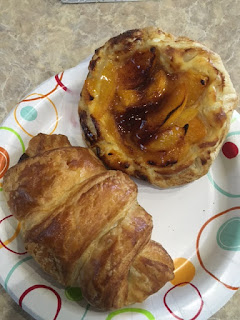 After a little TV and puppy play, I emptied the tanks and began the laundry, settling in for a day of drudgery!!  There were a few breaks of watching campers coming in and setting up brand new tents, as well as the family with the rented RV who didn't know how to hook up the sewer.  I wandered by just in time to prevent a disaster.

By now I have clothes hung up from one end of my rig to the other.  I hang dry most of my stuff since everything seems to be made of cotton nowadays.  Two minutes in the dryer and they become washrags!

Since fairy gardens are all the rage, I spotted these two cute pieces and had to have them.  I should have put the gazebo over my plant ... it might have saved the day. 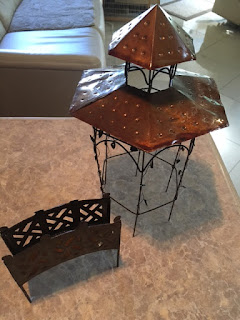 While wandering over to the parking lot where Jessie could see the bunnies ... you can imagine how THAT turned out ... I spotted this rig for sale.  Sadly, it's a Divorce Sale.  This 2007 Ambassador with new tires and all the maintenance records is selling for $110,000 AND you get the 2003 Jeep thrown in for free. 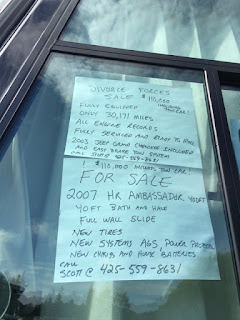 With only 30,000 miles and all new batteries, it sounds like a good deal.  Course I can't see inside, but it looks to be in immaculate shape.  I didn't see any dings at all.  So if you or anyone you know is interested, give Scott a call. 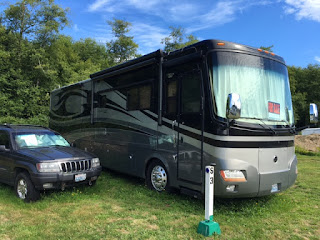 With the laundry finally done, I settled on a new recipe for dinner, chicken spaghetti.  As most of you know, cooking something that requires a lot of room in a very small RV kitchen, isn't easy.  I tried to cut and hack everything before I started, which worked out just fine.  It was when I tried to open the stove cover that things went south.  The pan of water for the spaghetti was just a tiny bit too close.  In spite of my best efforts, it hit the floor before I saw what was happening.

Although Cooper and Jessie came to help me ... I think more scared from the noise than the desire to help ... it took me thirty minutes to clean up all the water on the floor.  At least it wasn't HOT water.    How could I not laugh when I saw this face?? 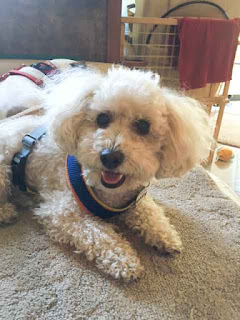 All cleaned up, I continued undaunted and came up with a great tasting casserole with minimal ingredients ... perfect for a potluck.  Just look up Pioneer Woman Chicken Spaghetti for the recipe.  I cheated and used roasted chicken from the grocery store.

More overcast ... actually, I think it was fog yesterday ... no wind and more rain this morning.  I'm hoping for wind and kite flying today, but won't hold my breath.   If not, maybe a ride down the Promenade on my bike will be in order.

Posted by Nancy Kissack at 7:18 AM