Making Hay ... Or Rather Salt

It's pretty interesting, the things we take for granted today, like salting your food at the table.  Salt controls the way your muscles and nerves work, which I learned years ago from an old football coach when I worked in Yosemite National Park.  He just happened to be walking by when I had a horrible cramp in my calf.  He said I needed more salt.  Weird, right?  So how did those folks from the Lewis and Clark Expedition figure THAT out?

Rather than "let's make hay" (my dad's saying, meaning get off your butt and get to work), I took a leisurely drive to the South of town for some picture taking ops and to check out the salt cairn, where three of the Lewis and Clark members replenished their stock of all important SALT. 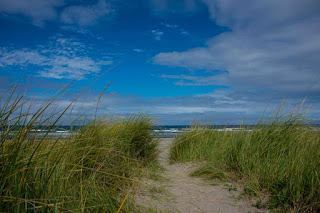 In 1806, the men build a cairn of rocks and placed buckets of salt water on top, then built a huge fire underneath, which they kept going day and night.  In about two months, they had four bushels of salt to use in curing meat and for the return trip to the East. 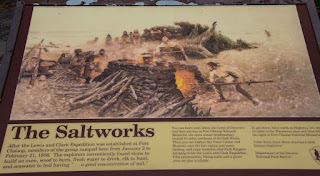 In 1900, the historical society determined this to be the site based on testimony of Jenny Michel's Clapsop Indian father who remembered the white men boiling water here.  Every year they reenact the process at this very spot.  No the oven isn't real, but it's the thought that counts. 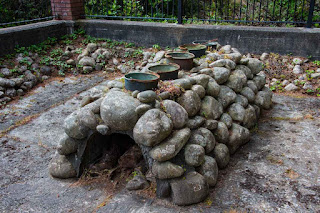 On your way out to the beach, you will cross the Promenade, the mile and a half long concrete trail from one end of Seaside to the other.  I think I'll make hay and bring my bike here so I can ride the entire route. 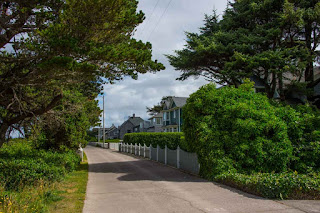 It was a bit of a walk to the sandy beach, which surprisingly had a lot of people camped out with their beach umbrellas, blankets and kids.  I wonder if the oceans have changed or if the Lewis and Clark guys really had to walk that far!!  It's beautiful, to say the least .... 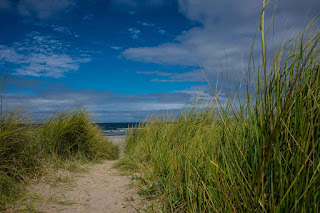 On the way back, after driving up and down all the little narrow streets looking for my "affordable" dream house, I spotted a little shop with decorator items.  Come to fine out, it's actually a Thrift store of sorts, with lots of consignment pieces.  There were a couple of Antique stores too, but nothing I couldn't live without on this day!! 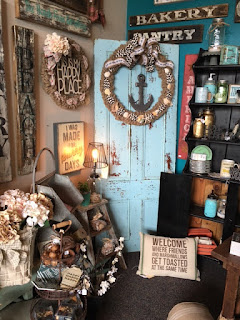 That's when I happened to see The Gray Whale BBQ.  It's in an out-of-the-way location, but if you're in town, try their food.  On the recommendation of Ted Rea from Northwestern Kites, I ordered some pulled pork with cole slaw.  WOW!!!  Personally, I think MY bbq is pretty good, but this was even better!!  It's a HUGE portion, enough for at least three meals for me.  The cole slaw isn't you're mother's cole slaw ... it's big chunks of cabbage with a delicious dressing, NOT mayo based as far as I could tell.  Delicious with a capital D!!! 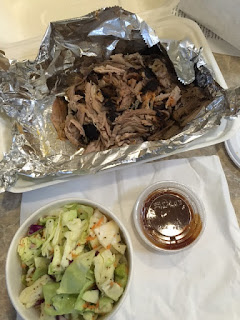 I got back just in time to take Miss Jessie to the Vet ... Seaside Pet Clinic.  If you need help for your babies, THIS is the place to go (at least according to internet reviews).  My appointment was at 4:00, yet I was in the door and talking to the man himself by 3:45.  My OWN doctor should take lessons here!!

Dr. Robert Remensnyder was a wonderful Vet, asking lots of questions and finally checking out the lump on her hock.  The good news is she will be fine.  The bad news, next Wednesday, it will have to be removed.  More good news, they will only give her a little anesthetic and a local just on her hock.  Even better, the entire procedure will only be $175.  More BAD news, she will probably have to wear a collar, which totally freaks her out, so we'll see how that goes. 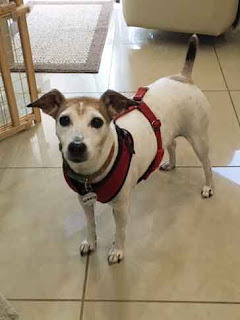 With some GREAT advice from Joanna the Kite Magician, I'm going to spend the day on the beach practicing ... that is if the wind cooperates.  Really, I consider it a WIN if I don't break something, including a tourist's head!!