It's a beautiful day in Oregon to celebrate our country.  There's no better place in the world to live as far as I'm concerned.  I might want to live in a different location, but NOT a different country!!  I hope everyone has fun with family and remembers the ones who made this possible for us. 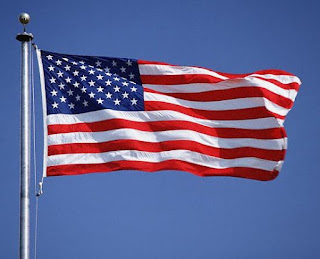 A rather fitting way to spend the day yesterday, began at the Oregon Trail Interpretive Center in Baker City.  When you stand out on the bluff, it's hard to imagine what people had to go through to get us where we are today. 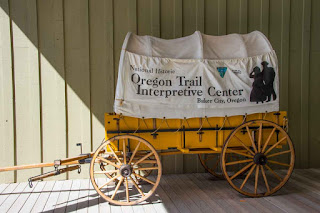 After a quick walkthrough of the museum, lunch was prepare for the Golden Spike Group, 36 in all.  Everything was cooked in these dutch ovens, including fried chicken, potatoes and gravy and cornbread.  I'm not sure the settlers had pink lemonade, but we ate off tin plates with large tin spoons. 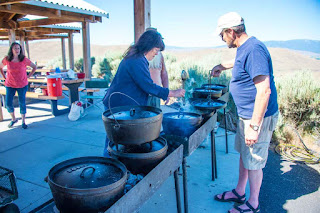 Our bellies full, we wandered back through the museum and around the mountainside.  If you are in the area, be sure and stop in here ... this is one of the most amazing stories.  Like the stuffed deer head above your mantle, these are all real animals depicting the epic journey across the U.S.  It's so realistic they even have cow pies!! 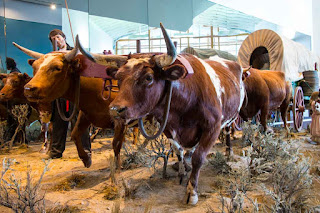 At the end of the building, you can look out wall to wall glass windows at the trail below.  That tiny spec is one wagon, parked on the trail to give you an idea of the immenseness of the journey. 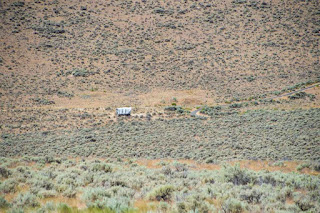 There actually is a paved trail, about a 45 minute walk to the bottom and a LONG hour's walk back UP the hill.  Take lots of water and food in case you get lost.  The settlers brought everything with them, from goats and sheep to gold mining equipment. 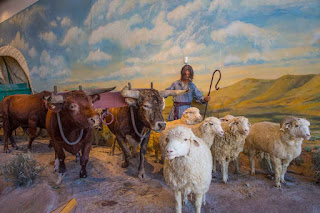 If you think WE have it hard sometimes, just imagine walking miles and miles every day, just to scour the countryside for dried buffalo manure to build a fire so you could cook dinner in a big iron pot.  Personally, I'd love to try it ....... for two or three miles!! 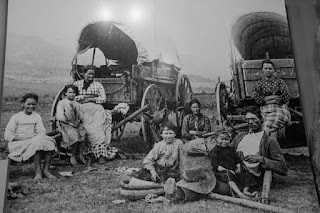 Lots of possessions were left along the way because they were just too heavy and not critical for survival. Many children who just couldn't survive the hardships didn't make it either.  There were lots of sacrifices for 640 acres and a new life. 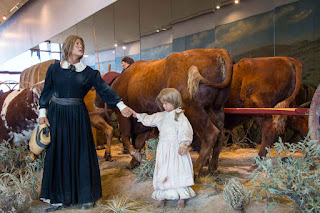 QUILT!!  Like the dog that only sees the squirrel, I can spot a quilt a mile away.  This one looked pretty old. 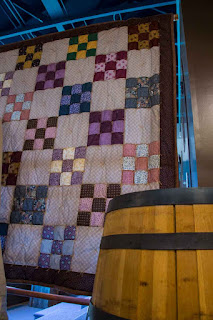 It was fitting to see the Fourth of July at Independence Rock being celebrated by the pioneers as we celebrate the same day in the lap of luxury. 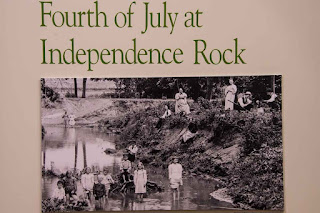 Rather than walk the long trail to the bottom, I drove down the road to a pullout and walked 50 feet to the Oregon Trail wagon ruts in the dirt.  I overheard a conversation about getting closer without the fear of starvation or dying of thirst on the long trail. 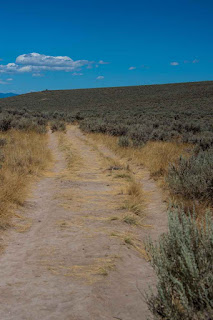 It was pretty amazing to look out over the land and imagine a long line of wagons making their way through the dust to the Willamette Valley.  Hardy people, to say the least. 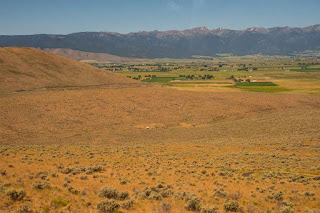 The trek through this part of the country was probably the easy part of the trip.  Several stories in the museum recount wagons being floated across the river, only to have them turn over and float away, the settlers losing everything. 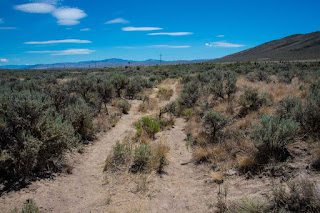 It was finally time for everyone else to head off to the Sumpter Valley Railroad while I drove back to the RV park to check on my puppies.  It would have been too long a day for them had I ridden the train.

Did you know there was a Chinese Cemetery in Baker City?  I drove up the hill to check it out, and the weirdest thing happened.  As I backed out to leave, I saw a truck and trailer pull up near me.  Uh oh ... lock the doors Nancy.  Guess I won't get that last picture after all. 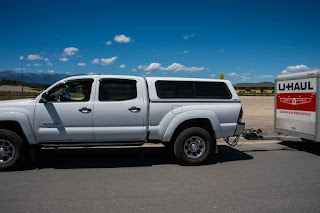 As I started to drive off, I looked over to see my nephew and his wife.  What the heck?  Apparently they were headed to Portland to pick up some bakery equipment, when Travis pulled off the highway for gas.  Brandi asked him if this wasn't where his Aunt was staying, and of course he said NO.  Then he looked over and saw my Jeep parked at the cemetery, so they drove up to see if it was really me and it WAS!!  That's such a weird coincidence!!! 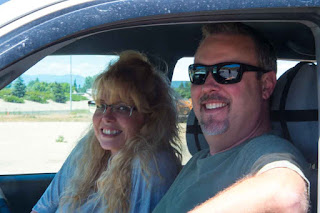 Later, after checking on the puppies, I drove BACK to Baker City where we all met at El Erradero for even MORE food.  Since I'm not quite on food overload ... maybe there is 1/4 inch left in my stomach ... we're having breakfast at the Hot Lakes Resort hotel this morning.

The cemetery and some cool osprey pictures are waiting in the wings for tomorrow's blog.

Have a happy and safe Fourth of July!!