I took off early yesterday morning to Illwaco Washington for their Saturday Farmers Market.  I'm not sure if these are clouds or fog, but there were a LOT of them.  Funny ... there was NO traffic for a Saturday morning ... I just breezed right along. 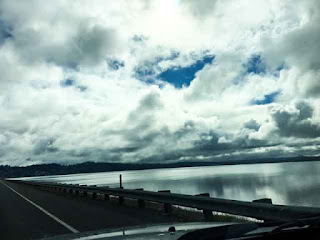 Pretty soon, I began to think maybe everyone else knew something I didn't.  As the clouds parted and blue sky appeared, I figured I had it made!! 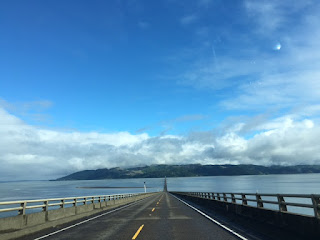 Not so much .... those clouds in the distance didn't move at all, and within minutes, it was pouring as I drove through the little town of Chinook.  All I care about however, is getting a parking spot at the Port of Illwaco.  Not a problem though, the Tuna Classic doesn't start till NEXT week.  That's when this place will be packed with boats and fishermen trying to win the big prize. 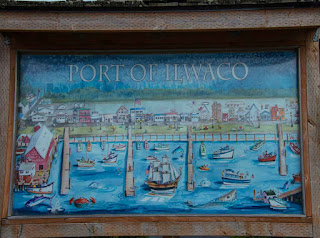 Most of the people here are the same vendors from years past.  It was nice to reconnect with them.  The lady selling homemade purses from beautiful fabrics, the lavender girl, the guy who hand cuts birdhouses, along with a couple of new bakery vendors. 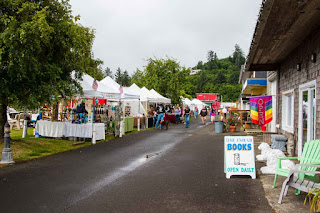 Pretty soon the rains came down again as I took shelter under the cinnamon bun, pie and cookie tent. Not on purpose I assure you, but my camera was getting soaked.  She had a new sensation she wanted everyone to try, so she immediately heated up FOUR bacon cinnamon rolls.  Now I'm not one to turn down such a treat, but this time I tried to pass.   She just wasn't going to let me, despite my protests.

I figured a bite or two wouldn't hurt, until she handed me an entire bun about five inches across.  My stomach did a flip ... really, I've eaten too much over the last few days, and I didn't need any more.  Not to offend her, I took a bite.  The cinnamon bun with orange glaze was yummy ... the bacon, not so much.

So here's the thing.  If you want to make a bacon cinnamon roll, chop that bacon up pretty small and fry it crispy crisp!!  Those huge one inch chunks of extra thick slabs with uncooked fat are just NOT appetizing, even if it DOES taste like bacon.  NOW WHAT??  I don't want another bite, let alone have to eat the whole thing!!  I nibbled until she forced someone else to take one, whereupon I snuck off down the street to locate a suitable depository.  I'm sure the seagulls will be in seventh heaven!!

It was good to see Jessie's Fish Company still in business.  Several small restaurants on the harbor front haven't fared so well.  The little ice cream store and two restaurants have closed their doors. 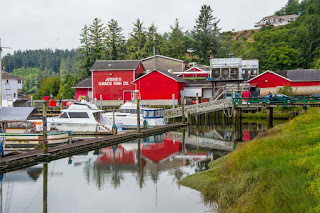 After getting the sweet taste out of my mouth, these veggies were looking pretty good.  Never mind that little cranberry-cherry pie ... it's SMALL!! 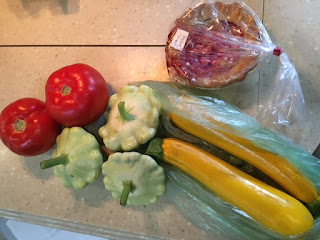 The Quilt Guild ladies were again selling raffle tickets for this cute boat quilt, made by the gals.  All the money they collect goes to local charities providing food for children and their families.  I buy TEN tickets every year.  Just like Bingo, I never win, but it's for a good cause. 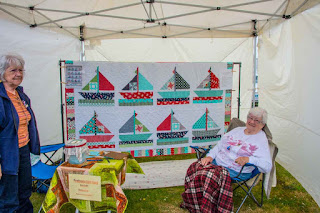 There were not so many pups this time around, but this little beauty Pretty Girl on the right was trying to meet up with every single one.  Her maid and chief caretaker said every time she gets in trouble, she attributes it to being blond.  I get that ....... 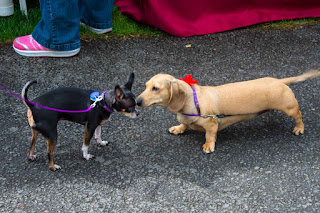 When the rain finally let up, I took a few harbor pictures ... there's nothing like grey skies and boats! 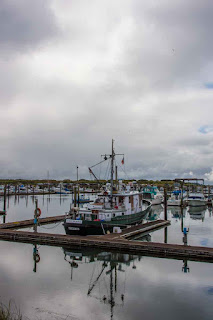 Until the rain came in again ... you can see it on the other side of the harbor coming our direction.  Since I really didn't want to take a chance on another bacon cinnamon bun, I made a quick exit to my Jeep. 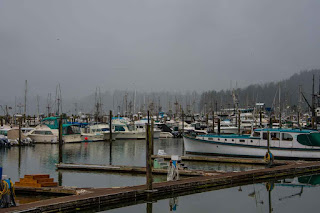 The clouds never went away, making it look like this is the bridge to the heavens above.  STILL no traffic.  How lucky can I be!! 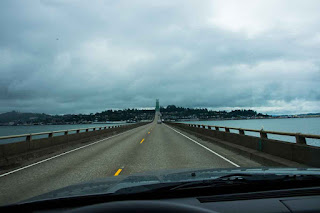 In spite of the closeness to my neighbor, I drug out my barbecue so I could try my new fangled gadget on the grill.  I think I'm getting the chicken part down pretty good, but the veggies may need a little work. 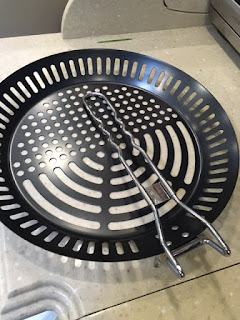 Actually, both could have stayed on the grill a little longer, but at least they weren't burned.  Not quite cooked enough, but NOT burned!!  YAY for me!!! 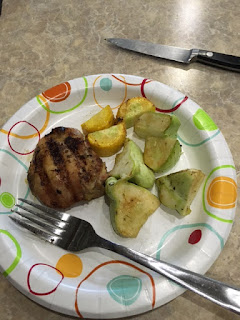 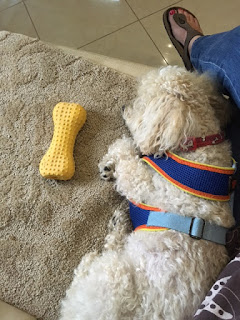 Another even BETTER market is today in Astoria, so I'd better get cracking.  I have to make room in my Jeep for that ladder I bought!!!