In spite of all the predictions of sun, it continues to drip the wet stuff on our heads as I went off on safari yesterday morning.  There is an RV Park of sorts, requiring purchase AND membership, where you can stay year round.  Called Safari Association of Illwaco, you purchase a membership lot for X amount of dollars, depending on what the current owner has on his lot, then pay a rather inexpensive membership fee.  You can live there permanently or part time ... it's up to you. 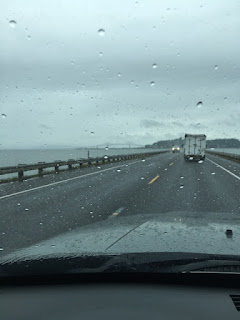 In order to get there, you have to cross the continuously under repair Astoria-Megler Bridge, the longest continuous truss bridge in North America.  At least this time the entire top of the bridge is in good repair.  They were working on the side rails, and lucky for me, I hit it just right and did not have to stop, not that that would have been bad.  Some of the guys are pretty good looking -- a little OLD-lady eye candy!! 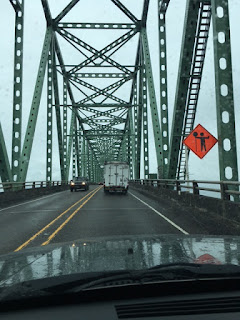 I'm headed to the other side of that point covered in clouds and MORE rain.  A little about the park ... you can have family or guests visit, but they cannot stay more than 30 days, and guests can only stay if you are there.  Probably a good thing!!  If you have a DOUBLE lot (and pay double dues), you can purchase another rig to use as a guest house.  Dues are around $1100 a year (that's pretty cheap living) which includes cable TV and WiFi which you must pay for whether you use it or not.  Electricity is extra.  It's a gated facility, so they keep riffraff and salesmen OUT. 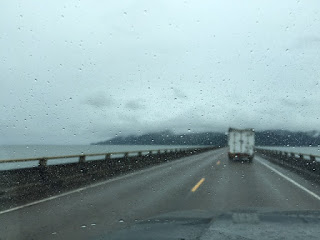 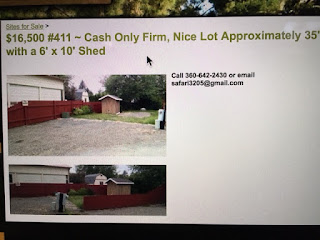 There were a few oldies but goodies hanging out, including a couple of Silver Streaks from the 50's and this beauty!!  It's a two story Stuart Garner she said.  There's a bedroom and bathroom on the bottom floor with another bedroom and the living quarters up top.  How cool is THAT!!! 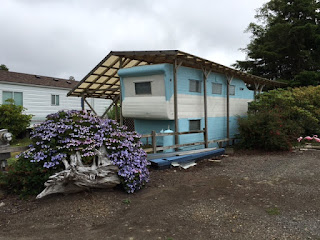 I'm not sure if I want to buy in here.  The price is right ... children (or grandchildren) are only allowed to stay for two weeks at a time and there is always someone willing to mow the grass for a few bucks while you're gone.  This isn't your Ritz Carlton park ... there's a mish smash of rigs old and new, but overall, very well kept with a lot of nice people.  I'm a little hesitant about the Board of Directors requiring approval on just about everything.  As with most parks, there are a LOT of rules ... not that I don't follow the rules you know!

I drove back home under even more clouds than when I left.  This is photography heaven, but I was on a mission to report back to a couple of people about the park.  I haven't made up my mind yet.  I keep thinking if I'm this hesitant, maybe it's for a reason.  FYI ... there are many lots available up and down the peninsula to park your RV, all of which have regulations about how many days a year you can stay. 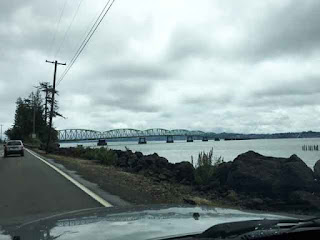 When I arrived back home to Thousand Trails, I found this deposited at my door.  Sorry, I did NOT order a fire pit.  I called the Ranger, but since it still stands at my front door steps, they apparently don't listen to their answering machine.  My nice single neighbor, who apparently isn't single after all (we all knew THAT was coming) even went and reported it, but to no avail.  I'm dragging it out to the street ... maybe they'll get the message that way!! 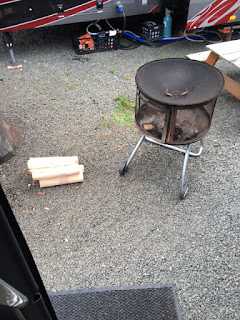 This morning I'll drive all the way BACK to Tillamook, or rather Bay City where I'll meet my brother and his wife for lunch (they live in Montana and I NEVER see them).  Too bad they didn't call me when I was in Tillamook ... it would have saved me a long drive.  At any rate, I'll have a chance to stop in at a quilt shop in Cannon Beach on the way back ... and it's a GOOD one!!