I know this is long, but it was SO interesting!!!

On Monday the Fourth of July, eight of us from the Golden Spike Group met at the Hot Lake Springs Hotel for breakfast.  For $10 each, you can have a buffet breakfast, including the best waffles I've ever had, covered with blueberries and whipped cream, which I of course topped off with half a bottle of syrup. 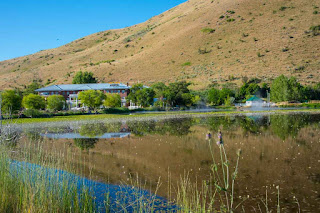 I arrived early to walk around and take a few pictures of the lake and the hotel.  The place is ramrodded by Lee Manuel while her husband David, renowned bronze artist, who I admit I've never heard of, brings in the bucks. 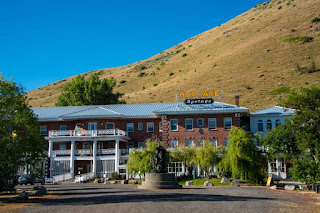 As soon as I sat down on the front bench, I was greeted by David and his dog Buddy, followed closely by every goose and duck in the neighborhood.  He feeds the koi fish every morning and the babies rush in to steal bits and pieces. 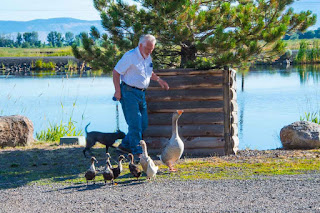 The mineral hot springs run continuously, bubbling up out of the ground, making beautiful morning mist. 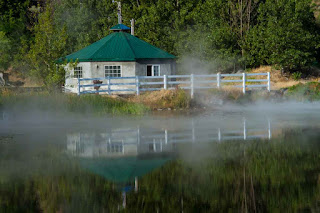 The second person to greet me was their peacock, perched high up on the railing.  He squawked, I said yes and he squawked some more. 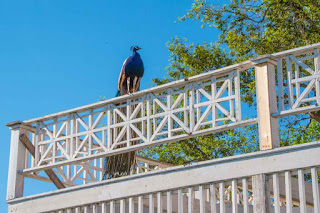 Breakfast was served on the porch.  That's apple juice, not wine, in case you were wondering. 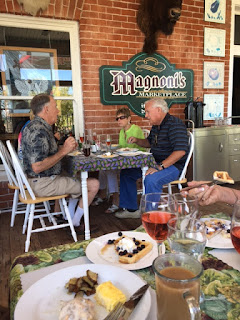 Once breakfast was over, Lee was kind enough to take us through the second floor rooms, giving lots of details about the restoration and the furnishings.  Rooms rent for $169 a night, which includes breakfast.  She emphatically states the hotel is NOT haunted, and if you believe in ghosts, you're an idiot.  She's a pretty strong minded individual, to say the least. 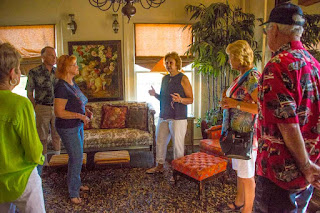 Then it was on to David's studio for a chat.  If you look closely at the George Washington statue in clay (to the left), you will see a stack of 2x6's and a piece of clay holding up the flag.  It got a little too warm the other evening and it began to sag.  This piece will be cut up today for casting.

We talked to David and listened to his stories for about 45 minutes.  Many involved John Wayne and his son Michael, his piece in the White House and the story behind the image below.  He's still working on the four in front of him that all together tell an Indian story. 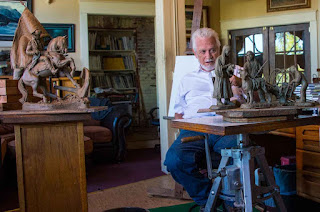 There are only two of this bronze in existence ... one here and one in Portland.  Apparently the Portland people called him one day and wanted to remove the cross on the Bible being held by the boy.  David got Bill O'Reilly (yes, THE Bill O'Reilly) involved, and after he aired the story on TV several times, calling the Portland people wimps, they retracted their request. 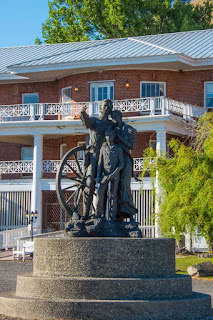 The meaning behind every part of every piece is much more than you would expect.  The anchor is from the ship, the Constitution, and George's horse is standing firmly on top of it.  The horse even has mud on his feet from trumping through all the protestors.  He proudly flies the flag with all the stars on it, but full of holes from all the battles America has fought to remain strong.  The thought process is very interesting. 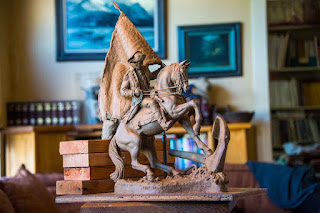 When we returned later to tour the foundry, Lee was shocked that David spent so much time with us. She said he usually takes less than 5 minutes and people are out the door.  We were pleased that he enjoyed our company and belly laughs.

The bronze ingots at her feet are heated in a crucible, lifted and poured into the molds resting in the horse trough full of sand (yes, a horse trough ... I have several just like it). 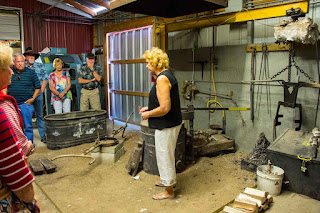 This is what comes out of the mold.  Usually cut into 9 or 10 (maybe even more) pieces, it is all bronze soldered back together.  This one still has individual feathers being stuck to the Indian. 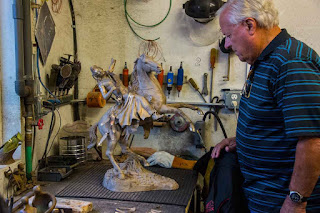 Again raw metal, the bronze still has to go through the patina process to end up the color you see below. 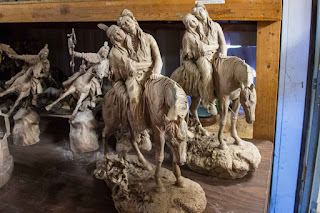 For those with color, it is heated up with a blow torch and the color applied.  When it cools down, the metal pores close up, encasing the paint.  Just for the record, although you KNOW I wanted to buy five or six of these for every room in my house .... they are NOT cheap.  This particular one probably runs $25,000.00.   That's 25 with THREE zeros behind it.  I thought I would settle for a bucking horse, but for $12,000 I had to pass.  Lets just say Lee controls the market VERY well. 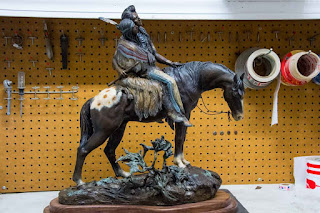 For those who were curious about the car parked on the road ... we thought it might contain a dead body since it was there all weekend.  I was sure Mrs. Someone was having an affair and had run off with her boyfriend for a "special weekend", but turns out that was not the case.

This building behind the hotel is not on the property.  Apparently some guy who owns a small house between the RV Park and the Hotel, tried to claim both (mostly the hotel) for free, taking everyone to court.  He lost.  When the Manuel family applied for building permits and restoration began, he was further infuriated.  The barn in back was his, but instead of restoring it, he cut the struts holding it up and let it crash to the ground.  In the end, he had no access to his house for vehicles, so he parks his car on the ditch bank and walks to his house across a little bridge in the middle of the lake.  Take THAT he said!!! 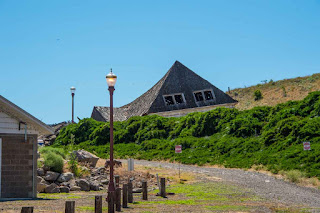 So no dead bodies .... darn, that would have been a GREAT story.  At any rate, I made it to Bend Oregon Thousand Trails around noon, where luckily I found a perfect spot immediately, between the 6 rigs lined up at the sewer dump and the 5 rigs trying to get out the driveway.  YAY for good timing!!  I even backed in with NO help!!!