Surviving that John Barresi Kite Clinic was a BIGGIE for us new fliers and this picture says it all.  John is on the far right (top kite in our formation, the only straight one), calling out the moves we are to complete, with Ashley next to him (center right), then me (center left).  Can you see those two little kids?  That's Dylan (8) next to me in line and Cardin (6), the itty bitty third from the left.  On the second day, those kids got drug around a little due to the wind.  Heck, "I" got drug around!! 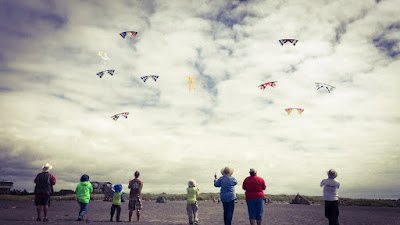 I didn't last long Tuesday morning, thinking I was missing some good wind to fly in, so I sent Ashley a text message and we met on the beach.   That's her mom in the chair, a smart cookie who brought her own seat.  Since I was already flying, Ashley set up her new kite and we set about practicing what John preached. 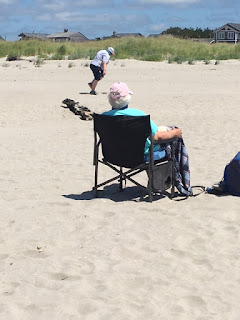 Why is it always easier said than done?  After several downward figure eights, we came together for a quick picture before whacking leading edges.  That's actually pretty good, considering where we both were three days ago!! 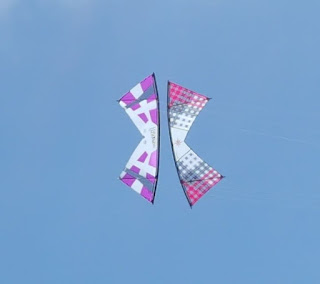 Dani came to the beach with her Mama Ashley.  She wasn't terribly thrilled, as you can tell.  She's pretty sad her buddy passed away just a week ago and she wasn't eating.  I suggested canned dog food, which she took to very well.  With a full tummy, she slept most of the two hours we flew our kites. 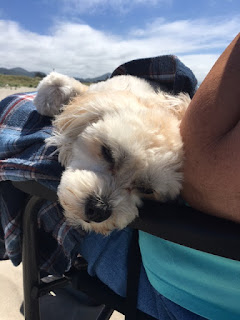 Ashley took a couple of pictures of me and my Shook.  I think I've mentioned before, this is a piece of art, made by Eliot Shook from North Carolina.  No two kites have the same design and most aren't even the same color. 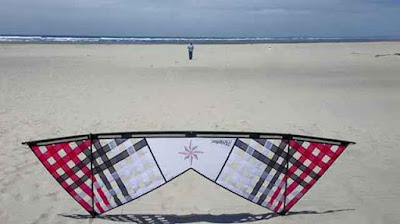 Amazingly, it finally clicked as I flew those figure eights.  They said it's the difference between strangling a snake and holding a baby bird.  I know, kiters are weird.  For me, it was like driving a car and knowing how much to turn the wheel, how much brakes to apply and where the accelerator is.  Now to practice and fine tune it so I can drive 65 mph one handed on cruise control!! 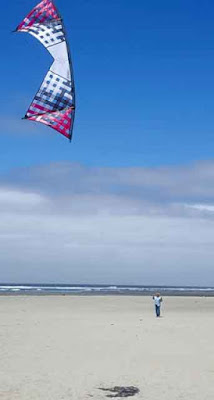 Unfortunately due to my little accident and not flying for a few days, I'll probably forget everything I learned.  I'm going to give it one more day before getting back on the beach.  I'm driving up to Long Beach today to scout out a campsite.  Since it worked out so well last time, I'm praying for a spot on the South side (satellite reception) and close to the beach.  Say a little prayer for me too?

Today I received emails from Tatiana, Odette, Dahlia, Camila, Celine and Kris.  I'm pretty sure I don't want they are selling.  Maybe if they picked names from some source other than "Most Popular Baby Names in 2005" (Mary and Diane might work), they could actually get someone to open their email.